"Every time an expert tells me it can't be done, I sit back, peel one of my oranges, and marvel at my ability to eat something that is impossible to grow in Nebraska."

Heat From The Earth

&quot;Every time an expert tells me it can't be done, I sit back, peel one of my oranges, and marvel at my ability to eat something that is impossible to grow in Nebraska."

He bills himself as &quot;Nebraska's Largest Citrus Grower", an unusual title given Nebraska's notoriously cold winters and relatively short summer growing season.  But what started out as an interest in earth heating for a new home has evolved into a semi-tropical biosphere in the western panhandle of Nebraska.

Russel Finch developed an interest in earth heat in 1979, when he was planning the heating system for an A-frame house he was about to build.  He wanted to use a heat pump as the only source of heating and cooling but found that heat pumps were not suitable for northern areas unless an additional electric heat unit was used.  At that time, heat pumps lost their efficiency at 32 degrees F, the temperature at which they switched over to electric.

However, Russel knew that throughout most of the United States, the temperature is stable at 52 degrees F at eight feet below ground.  He reasoned that if a heat pump was in a small room, and air that had passed through tubes buried eight feet deep was blown through that room, the heat pump would behave as if it were in a southern climate.  Russel contacted the University of Nebraska to validate his thought process, and was told by two professors that the idea was not feasible.

As Russel thought back to those phone calls, he commented, &quot;This was the most important lesson I have learned in twenty-two years of developing this system.  Don't believe anyone who tells you something won't work if no one has tried it before."

Undeterred, he phoned the heating division of the Coleman Company in Kansas.  An engineer at Coleman listened to his idea and agreed it should work very well.  Coleman was interested enough to furnish a heat pump at dealer cost.  The unit was installed and has worked flawlessly without any alterations for over 22 years.

The heating and cooling system uses a 1/3 hp blower to move air in a closed circuit of underground tubing.  The tubing consists of seven 6" diameter solid plastic tubes, with a total length of 1100 feet, buried along the perimeter of a portion of his home.  (See Diagram 1) 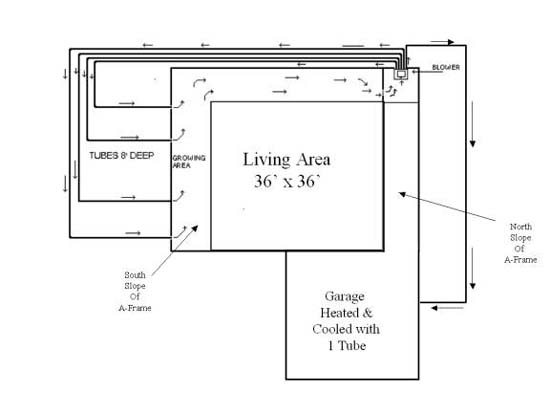 The greenhouse is excavated 5 feet below ground level.  Angled Lexan panels above ground level finish off the greenhouse's exterior.  Inside, the greenhouse can accommodate plants and trees as tall as 11 feet high.  The trees are actually planted in the topsoil, as opposed to being potted trees.    (See Diagram 3)

The system is extremely efficient.  During winters in Nebraska, the average high temperature is 36 degrees and the average low is 10.7 degrees F.  Typically, 20 days per year are below zero degrees F.   In July, the average high is 87 degrees F, with several days above 100 F.  Twice since Russel has lived in his this home, the temperatures have plummeted to minus 40 degrees F.  During these years, Russel has never lost any plants to frost.  The temperature in the greenhouse, even during the coldest outdoor weather, has never fallen below 35 degrees.  In a region where homeowners frequently spend over $200 per month to heat their homes, Russel estimates that the greenhouse costs about $450/year to keep the air circulating and the plants watered.  His total energy costs per year, including a substantial amount of energy used to water over an acre of grass, plants and trees surrounding the home, is about $2400.  The size of the house is over 5500 square feet, with about 3500 square feet of that space heated in some way by what Russel terms &quot;low grade geothermal heat". 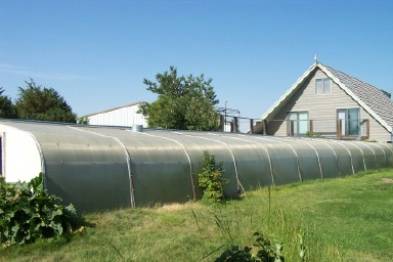 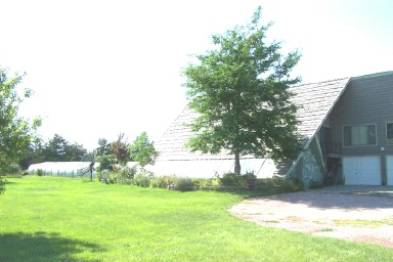 The greenhouse was really a by-product of the heating and cooling system.  &quot;From the beginning, we could see that the greenhouse, which we thought would only be usable during warmer weather, was able to support many types of plants year round," said Russel.  He has grown hundreds of different kinds of plants and trees over the years.

One of the early challenges proved to be an inability to chill the greenhouse enough in the winter months to force the northern plants into dormancy.  &quot;The northern plants need 900 to 1200 hours of temperatures below 45 degrees," says Russel.  He had to divide the greenhouse into a tropical section and a cold weather section.  &quot;We thought that when we closed the cold section off and cut off the underground heat, the room would cool off but it didn't."  By diverting the heating pipes to the tropical room, and opening a screened door at one end of the cold room, he was able to drop the temperatures enough to force dormancy.

&quot;We have chosen to chill for 900 hours, because most of the trees we are growing require no more than this," says Russel.  &quot;On December 1st, we start chilling the northern plants by diverting the warming tubes and opening the screened door.  We end the chill on January 12th.  Within seven to twelve days most of the plants will come into full bloom." 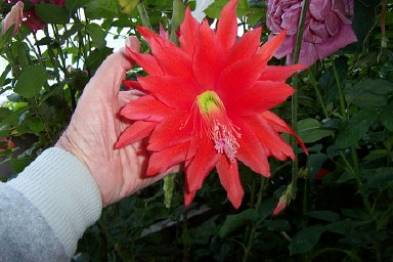 Some of the plants grown in Russel's greenhouse. 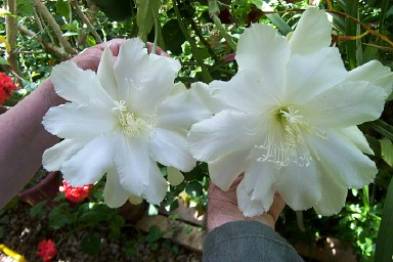 The first specimens were planted in November of 1992.  &quot;The criterion used to stock the greenhouse was very simple:  we would try any plant from anywhere in the world," Russel says.  The main purpose of the greenhouse was to prove the ground heat system, and there was no information available for a system of this type.  Russel says that most experts he consulted, either at the local university or at agricultural schools, stated &quot;this just flat-out will not work."

But Russel, never one to let an &quot;expert" derail his common-sense approach to problem solving, pressed onward.  Now in his greenhouse, he is growing Asian Pears, Valencia Oranges, Meyers Lemons, avocados, figs, roses, yucca, agave, hibiscus, and hundreds of other types of flowers, fruits, vegetables, trees and plants. 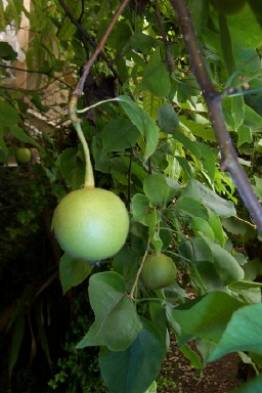 The old adage about making lemonade when the world gives you lemons turns out to be quite true in western Nebraska.  As Russel says, &quot;Every time an expert tells me it can't be done, I sit back, peel one of my oranges, and marvel at my ability to eat something that is impossible to grow in Nebraska."

For further Information on this project Russel has a booklet available for $12.95. He can be contacted at:

Steve McConaughey is a freelance writer and marketing consultant living in the Research Triangle Park region of North Carolina. When he is not writing or consulting, he is looking for a senior level marketing position in an early stage, technology-based company. If you are interested in discussing employment, writing or consulting opportunities with Steve, please contact him at 919-960-0609 or steve@mcconaughey.com . His resume can be viewed at www.mcconaughey.com/resume.htm .