Series connection is like batteries in a long flashlight, or like the horses pictured below, going head to tail all through the series lineup. So batteries or solar modules wires in series have the positive (+) of the first connected to the - of the second. 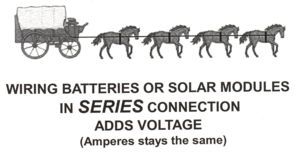 But the ampere capacity of each battery, that is, how long it can put out a given current, is not changed. If you buy four 220 ampere-hour rated 6 volt batteries and wire them series, you get a 220 ampere hour 24 volt battery as shown here: 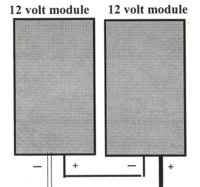 Likewise most 12 volt solar modules are made up of 36 crystalline silicon solar cells because each cell produces 1/2 volt. The panel is designed with 36 cells so it can produce 18 volts, enough to go through a charge control and charge a 12 volt battery.

Parallel wiring doesn't change the voltage, but it gives more current capacity. A set of 12 volt solar panels so connected is still 12 volts, and a set of 12 volt batteries so connected is still 12 volts. But much more power is put into the batteries when extra panels are added in parallel connection, as all are working together, each pouring in its current which adds to that of all the others. Adding more batteries in parallel connection lets you store more power, so you can use it longer between charges. But the voltage of the system remains the same. If you get four 12-volt batteries rated for 100 ampere-hours each, and connect them parallel, you make them into a 400 ampere- hour 12-volt battery.

Adding more solar modules with parallel connection charges the same voltage battery but charges it faster, because you get the current flow from each solar module added to that of all the others, going into the battery. Connected like the four horses that are parallel connected above, four 12-volt solar modules rated for 5 amperes each will give 4 times the charging power, and so will charge a 12 volt battery at a 20 ampere rate. This is most easily done by wiring each module or each series string of 24 or 48 volt modules into a solar combiner box where each is combined in parallel with the other modules or series groups.

Pictured above ... battery cells were shown connected in series to get a 12, 24, or 48 volt battery string. Such strings can then be connected in parallel with other identical voltage strings to get larger power storing capacity. That's like adding a second water tank for better reserves. In the drawing below, two series strings of 24 volts each are parallel connected at the left (+) end and at the right (-) end. 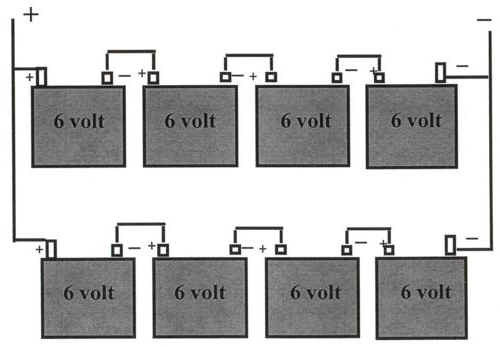 Its best not to connect a large number of parallel batteries, if you can use fewer, larger battery types to attain the same total capacity.

Backwoods Solar is a catalog sales source specifically dedicated to serving homes so remote that access to utility lines is not practical. We are an intentionally small business of 6 solar electric specialists; most living in solar-electric homes. We offer personal attention to self-reliant home owners, who choose and install their own power systems.