The sun has always been growing the grapes for California wineries. Now, with cost-effective solar electric systems, the sun can grow their bottom line, too.

As Mount Eden winery owner, Jeffery Patterson, discovered, solar power and wineries go together as nicely as any fine wine / gourmet food pairing. Mount Eden is the oldest winery in the Santa Cruz Mountains, established in the 1940s, and has been operating under the Mount Eden brand since 1972. Every year the vintner produces 15,000 cases of cabernet sauvignon, pinot noir and chardonnay from the 40 acres of grapes planted on this 200-acre property.

Akeena Solar, based in nearby Los Gatos, CA. recently completed installation of a 25 kilowatt DC-rated ground mounted solar electric system at Mt. Eden Vineyards. Mr. Patterson said, "From an environmental point of view, the basic nature of solar power -- plus the combination of incentives we will receive from the State of California and Federal government, and from my viewpoint as a businessman, the estimated cost savings over the life of the system -- made the decision a 'no brainer,' ". Mt. Eden's estimated savings over the 30-year life of the system is over $445,000, with electricity costs locked in at 7.7 cents per kilowatt-hour. 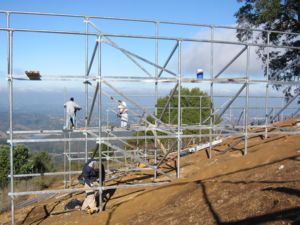 The installation at Mt. Eden was particularly challenging because the best -- and ultimately only -- mounting location was on a hill sloped to the north. This constraint required the design and engineering of a reverse sloped mounting system in order for the entire system to achieve maximum efficiency. The system consists of 136 solar modules mounted on three different ground mounted racks, using Sharp 185 modules and 9 Sunnyboy inverters. The entire array is tilted at 20ş angle, with a compass bearing of 175 degrees. Luis Rangel, Akeena Solar's Director of Engineering said, "The critical factor of the installation was to achieve the south orientation of the array on a north sloping hill and at the same time avoid any shading interference between the racks. We accomplished this by building three large ground mounted racks which increase in height from 1 foot high to 25 feet high." 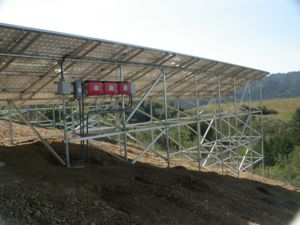 Wineries are a natural fit for solar power systems for a variety of reasons. Because wineries are typically family owned or are long established businesses, their owners have a longer event horizon than most other commercial operations. At wineries, a capital expenditure with a 5 to 7 year payback is reasonable, whereas most commercial businesses require a 2 to 3 year payback. Also, most wineries have available square footage for ground mounting -- if not usable roof space on storage or utility buildings. The seasonal nature of winery activity also lends itself perfectly to solar power and PG&E's Net Metering Program. Most wineries energy consumption profile goes up in the summer months with a significant spike in August, September and October, which is harvest and crush season. This coincides with the time of year when solar power systems are at their peak production. 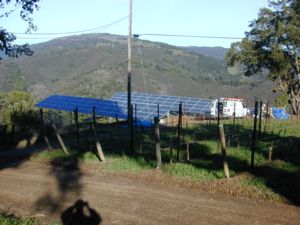 The combination of PG&E's A6 commercial Time Of Use (TOU) rate with a net metered solar power system made the business proposition, to quote Mr. Patterson, a "no brainer". On the A6 rate, customers pay a premium per kilowatt-hour (kwh) between the hours of 12 noon and 6:00 p.m. during the months of May through October. This is called the seasonal peak rate. During the rest of the day and year these customers pay about half or less of the peak rate. Wineries with solar power systems on an A6 rate are able to offset all or the majority of their most expensive peak power with their own solar produced electricity.

Intangible benefits of solar power at wineries must also be factored into the equation. Many vineyards and wineries are in scenic and environmentally sensitive locations. The green aspects of clean, renewable power translate into an improved perception of the wine by consumers - thereby increasing winery visibility and sales. Moreover, these benefits can be directly conveyed to consumers when incorporated in a real time web-based data acquisition system. Mount Eden's customers and partners can directly see how their system is performing by going to http://www.akeena.net/monitor/mteden/.

The sun has always been growing the grapes for California wineries. Now, with cost-effective solar electric systems, the sun can grow their bottom line, too.

For more information about the applications of solar power to wineries contact Akeena Solar, info@akeena.net or 408-395-7774