Overall, the 'router' for power is a first step towards an energy model that is more efficient because it uses locally generated power at the highest possible efficiency. As more and more manufacturers design their electronic appliances to be DC compatible, the concept will proliferate.

A Router for Electrical Energy

by Mark Robinson is the VP of sales & marketing for Nextek Power Systems.

The energy profile of the future probably looks a bit like this. 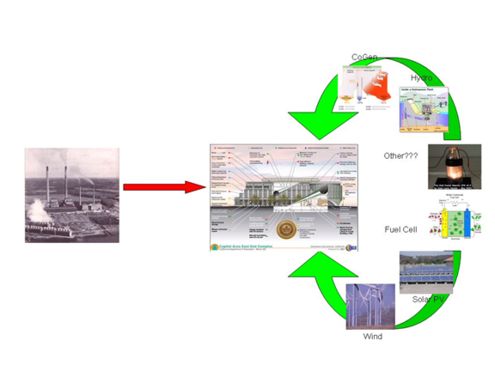 High performance buildings will generate some power of their own, through whatever means available, then use the grid to make up the difference. This is an obvious extension of the DG programs we're now using. It's also likely that the net-metering model will decline in popularity as it is not financially sustainable for the consumer or the utility.

Most of the power we generate is DC, and most of our electronic appliances use DC. Typically, electronic devices have internal AC to DC converters. Fluorescent lighting ballasts, for example, each have an internal (and not particularly efficient) AC to DC converter. Computer power, telecom systems, motor controllers and more also convert AC to DC. Is there a need to invert and convert the power back and forth from DC to AC then back to DC again?

The most efficient way to utilize the power we generate on-site is to consume it all where (on-site), when (peak), and how (DC) it is generated. The grid, then, becomes the backup. To accomplish this, electronic loads will have an input that bypasses their internal AC to DC converter. High efficiency DC ballasts are already commercialized. The Allen Bradley Powerflex 400 and 700 series variable speed motor controllers have direct DC inputs. Major computer manufacturers will outfit their computers with power-saving DC inputs on request for large orders. 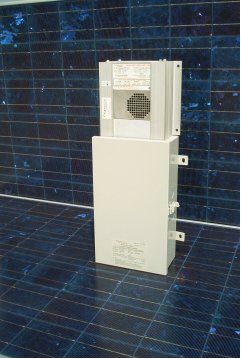 Next, we need a device that acts as a 'router' for power; taking all available power from one or more local DC sources and filling in, where necessary, with grid power converted to DC. This is the function of the Nextek NPS-1000 Smart Router for Power.

A typical installation at the Whole Foods Store in Berkeley, CA. includes 30k of Sharp panels installed on a Powerlight mounting system. They are connected through the NPS-1000 modules to 30 to 35k of DC ballasts in the four-foot T-8 fluorescent lighting fixtures.

In this system, all available power from the solar panels is used first at over 98% efficiency, then, if additional power is needed, the router fills in with grid power, converted to DC. Because the lights are on whenever the sun is out, most of power is used at the highest possible efficiency. Power conversion only happens when it's cloudy.

As an interesting side-effect, this configuration of system allows us to keep most of the lights on when the grid fails if there is sufficient sunshine. This is something that an inverter-based system cannot do due to anti-islanding restrictions. Because the system can accept multiple sources of DC input, batteries can be added to keep the lights on during a nighttime or cloudy-day grid failure.

From a regulatory standpoint, an interesting twist arises: because this system does not (and cannot possibly) generate AC power, there is no need for a utility interconnect agreement. As far as the utility is concerned, this is an energy efficiency enhancement - the building simply uses less power during peak. Agencies like the California Energy Commission, though, see this as a renewable generation system that never generates more than it uses and therefore qualifies for all renewable generation rebates.

Overall, the 'router' for power is a first step toward an energy model that is more efficient because it uses locally generated power at the highest possible efficiency. As more and more manufacturers design their electronic appliances to be DC compatible, the concept will proliferate. 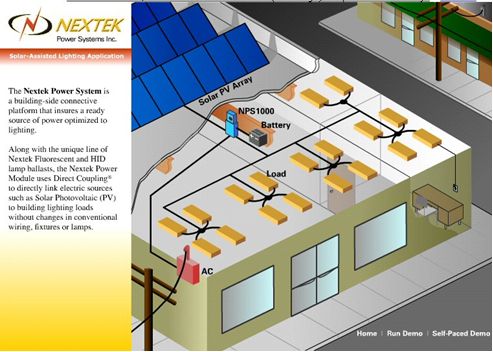 A graphical demonstration of this system can be seen at www.NextekPower.com.

Mark Robinson is the VP of sales & marketing for Nextek Power Systems. He is LEED ™ accredited, a licensed master electrician, and a Microsoft certified professional. He can be reached at MarkR@NextekPower.com.