The Tandem Cell converts the energy of sunlight directly into hydrogen gas by splitting water into it's constituent elements, Hydrogen and Oxygen.

Hydrogen Solar is pleased to announce its carbon-free hydrogen generating technology, the Tandem Cell™ has been chosen as an exhibit for London's Science Museum exhibition, Nanotechnology: small science, big deal.

The Tandem Cell will be on display at the Museum's Antenna gallery from February 25th to August 31st 2005, after which it will tour four UK venues.

The Tandem Cell converts the energy of sunlight directly into hydrogen gas by splitting water into its constituent elements, Hydrogen and Oxygen. The cell has nano-crystalline coatings of metal oxides, which have vast surface areas and enable the cell to capture the full spectrum of ultraviolet light. 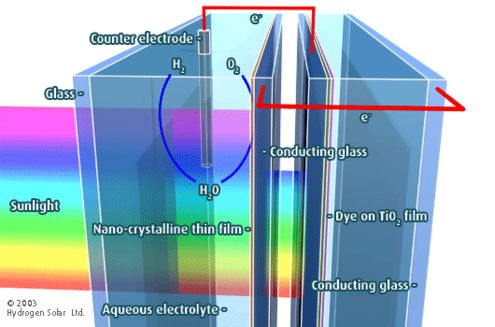 In August 2004 the company announced the cells were able to directly convert just over 8 percent of the sun's energy into hydrogen gas. The result is a very pure form of hydrogen and unlike current industrial processes does not produce any carbon dioxide.

Hydrogen Solar's CEO Dr David Auty said the exhibition offered the public the first opportunity to see the company's new 25cm cells. &quot;The key to the greater efficiencies is the application of nanotechnology, which dramatically raises the production of hydrogen from the cells," he said. &quot;We are on target to raise these efficiencies still further," he added.

The exhibition is supported by the Department of Trade and Industry and underpins the Science Museum's Antenna gallery reputation for science exhibitions that investigate stories behind the headlines.

Hydrogen Solar was founded by Julian Keable after he met Professor Michael Gratzel, head of PhotoChemistry at the Swiss Federal University of Technology (EPFL) in Lausanne.

The Tandem Cell concept was jointly invented by the EPFL and University of Geneva as part of a project supported by the Swiss Federal Office of Energy. Hydrogen Solar has a worldwide exclusive licence from the EPFL for the application of Tandem Cell technology. Further patents have been filed by Hydrogen Solar for the core components and coating technologies.

The company has received grant awards from the UK's Carbon Trust and DTI to develop the Tandem Cell technology. Further awards for development projects have been granted by the University of Nevada Las Vegas Research Foundation and the US Department of Energy.

Nanotechnology: small science, big deal is a free exhibition at the Science Museum, running from 25 February to 31 August 2005. This exhibition is supported by the Department of Trade and Industry.