Asia Pacific photovoltaic markets are set to grow rapidly and are projected to account for approximately one-quarter of global demand by 2015, up from 11% in 2010, according to the latest Asia Pacific Major PV Markets report from Solarbuzz. The top five markets in this region—China, Japan, India, Australia, and South Korea—are projected to account for 3.3 GW of demand in 2011, with China and Japan leading the region.
Each major Asia Pacific country market is currently undergoing significant alternations to its policy structure. While China, India and Australia are building on-grid markets for the first time, Japan and South Korea face policy transitions that are re-stimulating their domestic demand over the next two years. Following the establishment of a manufacturing base that now accounts for approximately 50% of global production, China is stimulating its domestic demand through both national and provincial programs. This will cause China’s market to expand in 2011 by up to 174% over its 2010 level.
“Market growth expectations are high for the region, China and India in particular, as they each have multi-gigawatt project pipelines. However, the largest challenge facing many of these projects is the need to secure financing amidst a still evolving policy and regulatory environment,” said Craig Stevens, President of Solarbuzz. “If these policies are successful in delivering the projected growth for the Asia Pacific region, it will help offset the impact of incentive cuts across Europe.”
In terms of customer segments, growth will be led by utilities, forecast to become the largest customer segment as the markets move away from the current dominance of residential installations.
Figure 1. Customer Segmentation in Major Asia Pacific Markets 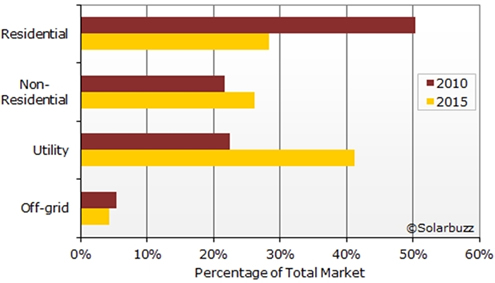