The Evolving Thin Film industry Growth Trajectory to Gain Further Pace Going Forward
Thin-film PV technology witnessed minimal research activities since early 1980’s. Post this period, it witnessed a constant advancement, in terms of manufacturing technology and materials used. The pursuit of cost-effective electricity generating technology lured major corporations and investors towards thin film PV industry. The industry saw more than 100 companies entering the market between 2001 and 2009. Thin Film PV technology has seen a major development leap from - only being associated with the little strip of PV cells that power calculators to sophisticated BIPV or solar charges for mobile devices. From a mere 14 MW production in 2001 the market has grown to reach 2141 MW in 2009, at a CAGR of 58%. The market outlook for the coming decade appears promising as the major thin film producing countries - Japan, China, and the US - are announcing aggressive support for renewable energy expansion through incentives and regulations. In the retrospect, the Thin Film module production is projected to grow at the rate of 24% from 2009 to reach 22,214 MW production by 2020. 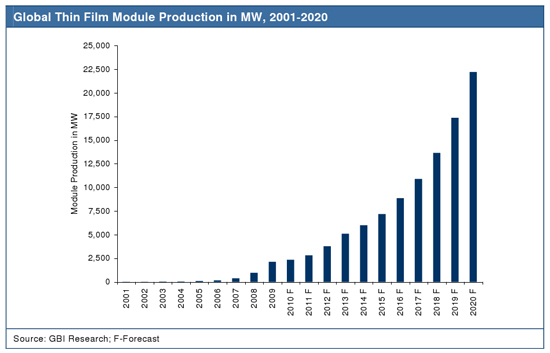 Thin film technology grabbing increasing share in the Solar Photovoltaic Industry
Over the period of time the technology has also been successful in grabbing a growing share of the PV market. Thin film production market share in the global solar PV market grew from a mere 2.8% in 2001 to 25% in 2009, thus dictating a growing share in coming future. Thin film solar PV, as per our estimation, is set to increase its share to ~38% by 2020. Expectations are that in the long-term, thin film solar PV technology would surpass dominating conventional solar PV technology, thus enabling the long sought-after grid parity objective. 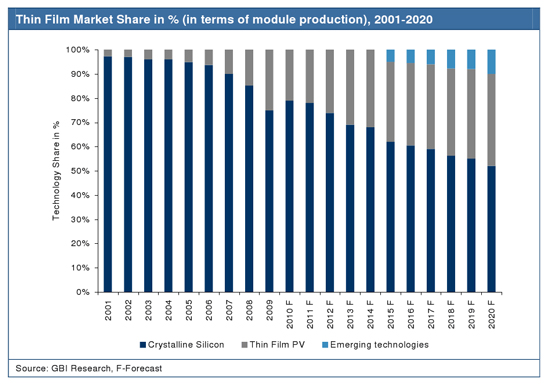 CIGS – The future market leader
CIGS technology is getting more popular than other thin-film technologies due to its higher efficiency and reduced manufacturing costs. The success of CIGS cells depends on the efficiency, faster and cheaper manufacturing process. The future of CIGS technology is encouraging as a lot of venture capitalist firms are investing in this technology. Investments in excess of $2 billion have already been made for the CIGS market development by various companies. CIGS will most likely be the face of thin film solar PV technology in the future. The technology’s value proposition is that it offers, combined advantages of both c-Si, which gives relatively good efficiency and thin-film PV technologies, which claim potential advantages on cost, flexibility, weight, and manufacturability. From 2010, CIGS segment is expected to capture the maximum share in the thin film module market as most of the CIGS manufacturers will begin to attain production cost and conversion efficiencies on par with other thin film technologies especially Cdte. 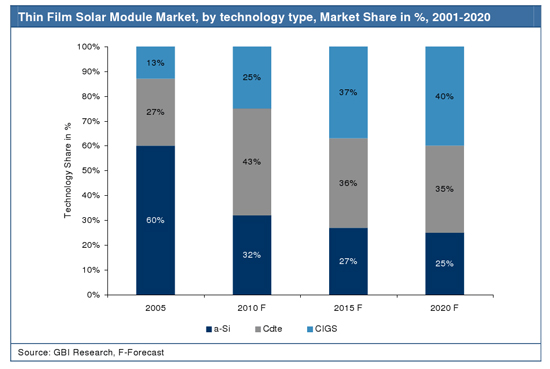 Market Expansion Coupled with the Entry of New Players Driving Growth
With over 160 companies producing thin-film solar cells and modules worldwide, the market includes a number of big players with many years of experience and expanding production capacities (First Solar, Kaneka, Mitsubishi, United Solar etc.). There are also a handful of newcomers, a small number of which have the potential to develop into significant players. Many of these companies are ‘pure players’, but a lot of companies already that are established in silicon technology are also attempting to enter the thin-film technology market. Many manufacturers (such as Sharp, ErSol and Q-Cells) see the expansion of their thin-film activities as a type of hedging to their existing technology portfolio, while others are dedicated solely to this technology (e.g. Würth Solar, Kaneka, First Solar and Shell). Thus, with the increasing number of manufacturers focusing on this market would eventually lead to major growth in the near future.

Low Efficiency of Thin Film Technologies is a Significant Inhibitor
Due to the low efficiency levels of the thin film technologies, their cost effectiveness is not competitive at present. Therefore, competing with electricity cost generated through conventional sources of energy is currently not possible for thin film technology manufacturers. This has led to uncertainty in technology demand going forward into the future. Coupled with this, capital constraints due to global financial crunch, has led banks and manufacturers, to shy away from financing thin film technology in favor of more mature and abundant crystalline silicon modules for projects in 2009, which may continue in the coming future, resulting in narrowing the thin film expansion.

Competitive landscape
Most of the significant thin film module producers use the aSi technology which indicates the effectiveness and innovative potential of this mature technology. While number of companies in a- Si production are larger than other thin film technologies, Cdte technology emerged as a potential challenger and garnered maximum market share in 2009 with First Solar being the market leader. First Solar’s module production was five times the production of the nearest competitor, United Solar. Only one company from the top 10 companies produced significant amount of CIGS modules in 2009, Wuerth Solar. The production numbers for CIGS are expected to change significantly going forward as new entrants plan to begin the production ramp-up, coupled with extensive investment inflow in this segment.

About GBI Research
GBI Research is a leading business information company providing global business information reports and services. Our highly qualified team of Analysts, Researchers, and Solution Consultants use proprietary data sources and various tools and techniques to gather, analyze and represent the latest and the most reliable information essential for businesses to sustain a competitive edge. If you have any queries about this report or would like further information, please contact
North America: +1 646 395 5477
Europe: +44 1204 543 533
Asia Pacific: +91 40 6616 6767
Email: info@gbiresearch.com