While the United States is rich in renewable resources for the production of green electricity, expansion and modernization of the North American power grid will be required to transmit that power to where it is needed.

08/01/09, 12:00 AM | Solar & Wind | Technology Discussions
Superconductor Electricity Pipelines are uniquely and ideally suited to address all of the requirements to move renewable energy to distant load centers:

Wind and solar power today account for a relatively small portion of electricity generation in the U.S. Those ratios, however, will rise rapidly as the country, like others around the world, increasingly turns to renewable sources to meet rising power demands and reduce CO2 emissions. The inability of America’s existing transmission system to move clean electrical energy from the country’s rural heartlands where it is generated to the high-demand urban load centers remains a primary barrier to achieving the 15-25% renewable energy objectives being outlined by the Obama Administration and Congress. In order to continue developing renewable resources, the North American electric power grid must be expanded and reconfigured to facilitate the challenge of moving large amounts of electricity over these very long distances.
The scope of this leading energy challenge will encompass the transmission of 100 gigawatts (GW) or more of green power. Networks of interstate, overhead 765 kV power lines that would require rights of way hundreds of feet wide are one solution actively being considered to achieve this objective. In addition to the significant impact to the nation’s aesthetic landscape, this traditional approach could require significant eminent domain activity and have a rather significant environmental impact.
A new option is now possible. Placed underground in existing rights-of-way, Superconductor Electricity Pipelines could carry many gigawatts of power more efficiently and at a similar cost to overhead lines, all in a pipe just three feet in diameter.
Superconducting Power Cables
As the name suggests, superconductor cables utilize superconductor materials instead of the copper or aluminum traditionally used to carry electricity in overhead power lines and underground cables. Superconductor materials provide two major advantages. First, wires made from superconductor materials conduct approximately 150 times the amount of electricity that can be conducted by copper or aluminum wires of the same size. This power density advantage drives system economics and is fundamental to the reason underground superconductor cables can achieve cost parity with overhead AC power lines over long distances. Secondly, when transmitting DC power, superconductors have absolutely zero resistance to the flow of electricity, which means that DC superconductor cables are literally perfect conductors and introduce no electrical losses of their own.
Superconductor materials must be refrigerated to exhibit their ideal electrical characteristics. The cables are cooled with conventional liquid nitrogen refrigeration systems that are widely used in a variety of industries. While some power is required for the refrigeration - lowering the overall system efficiency - superconductor power cable systems still have much higher overall efficiency than any other long-distance transmission system.
The cables employ superconductor wires that are commercially well established and are available from multiple producers globally. Superconductor cable systems are now operating in multiple in-grid sites around the world, demonstrating their reliability and performance, as illustrated in Figure 1. While all previous installations are AC applications, applying this established technology to DC is straightforward. Because superconductor cables are compact, light, and emit no heat or electromagnetic fields (EMF), they are particularly easy to install, even in close proximity to other underground infrastructure. 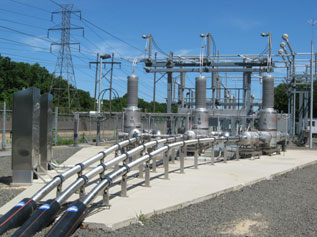 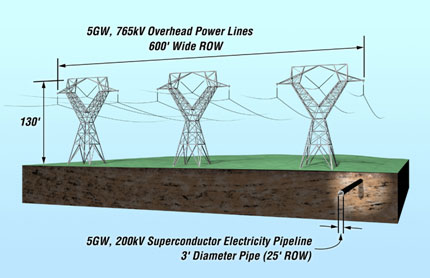