Fuel cells have the potential to dramatically change how the military carries out its missions, and how soldiers operate in the field. With the largest, most technologically advanced military in the world, the U.S. armed services use an immense amount of fuel and electricity, and any use of alternative energy would have positive effects on reducing greenhouse gas emissions. However, fuel cells are of particular interest to the military not for their environmental savings, but because of unique technical features that can aid soldiers in the field.

10/01/09, 12:00 AM | Solar & Wind | Commercial and Industrial Applications, Fuel Cells
The military has power needs that are quite different from commercial or residential applications. In a combat setting stealth is of the utmost importance, since noise and heat signatures can be used to locate military personnel. Fuel cells have no moving parts and are extremely quiet with a low noise signature, making them more difficult to detect by remote infrared scanning. Fuel cells can operate close to body temperature, as opposed to batteries which give off significant heat, reducing their heat signature as well. Due to their scalability and power output capabilities, fuel cells have been demonstrated and tested for use in numerous military applications.
Following a groundbreaking in early August, the U.S. Army is constructing a new Department of Defense's Ground System Power and Energy Laboratory (GSPEL), a one-of-a-kind research and testing laboratory complex. Eight different labs will be housed in the 30,000-square-foot facility and they are being designed as the cornerstone for the Army's next generation of power and energy initiatives. The facility will provide scientists and researchers with the ability to integrate hybrid-electric and fuel cell technologies into advanced military vehicles. The Army, with the world’s largest vehicle fleet, has been working on fuel cell auxiliary power units (APUs) for vehicles, to reduce the amount of gas and diesel they use to power on board equipment and electronics. This laboratory will help further development and demonstration of APUs and fuel cells for propulsion.
The Army has also been testing fuel cell powered Unmanned Ground Vehicles (UGVs) and they aren’t the only branch interested in the technology. The Air Force has been working with private companies to develop fuel cell powered Unmanned Aerial Vehicles (UAVs), both for surveillance and operational missions. The Army and Marine Corps are funding projects for portable soldier power and the Department of Defense has been deploying fuel cells to provide electricity for barracks, camp operations and officer’s quarters since the early 1990s.   The Navy is also researching fuel cell-powered submarines.
Unmanned Aerial Vehicles
Unmanned Aerial Vehicles (UAVs) are remote-controlled or self-piloted aircraft that can be used to collect surveillance data or deploy weapons, all without putting soldiers in harm’s way. UAVs have been used since the 1950’s but technologic advances have made UAVs an invaluable resource for modern warfare. Fuel cell-powered UAVs have the potential to further improve capabilities because they can fly higher and longer than current battery powered UAVs. Batteries’ weight and bulk make the units less maneuverable and reduces the payload. 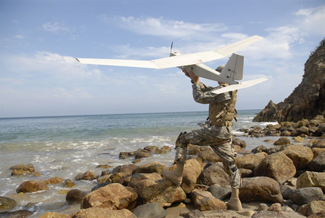