The US has installed over 25 gigawatts of wind, and thanks to hodge-podge of policy incentives, research and development, and private investment wind has become the poster-child of renewable energy and at the utility-scale has achieved grid-parity with conventional fossil-fuel energy. However not a single kilowatt of offshore wind has been developed, despite it being a stronger and more consistent energy source than its counterpart on land, closer to large populations where the energy is needed, and already proven commercial technology.

10/01/09, 12:00 AM | Solar & Wind | Opinions and Advice, Wind Energy
Imagine a solar developer passing up a perfectly sunny and suitable site capable of producing enormous amounts of clean solar power for another area that has less sun, produces less energy, and is farther from where the energy is needed. While this seems to make little sense, nationwide this is exactly what we have done with our wind power.
The US has installed over 25 gigawatts of wind, and thanks to hodge-podge of policy incentives, research and development, and private investment wind has become the poster-child of renewable energy and at the utility-scale has achieved grid-parity with conventional fossil-fuel energy. However not a single kilowatt of offshore wind has been developed, despite it being a stronger and more consistent energy source than its counterpart on land, closer to large populations where the energy is needed, and already proven commercial technology. All this makes it even more baffling that despite recent advances made in efforts to install offshore wind farms in several east coast states and in the Great Lakes, the United States has failed to tap into a source of renewable energy that has enough raw power to power the entire country.
Why is this? Offshore wind seems to have so much going for it. The wind off our coasts is stronger and less intermittent than wind onshore, since the relative smoothness of the water provides less friction to slow wind than the contours of land do. Even more important, offshore wind overcomes the Achilles heel of solar and land-based renewable energy: generally speaking, the deserts and windy zones are in the Southwest and middle of the country – far, far away from the coast where most of the United States’ population (and energy demand) resides. Developing these resources would requires hundreds of miles of transmission lines to be built, which aside from the environmental impacts of such massive infrastructure would also entail large amounts of loss during transmission – meaning not only losing clean energy but also increasing the cost.
But there is strong wind off the shores of Michigan, Ohio, Texas, and virtually every East Coast state – many of which count as among the highest energy consuming states in the country. Placing turbines a few dozen miles off the coast makes a lot more sense than in the middle of the United States where a very small percentage of our population actually lives.
While the concept of placing turbines into our oceans and lakes is new to many people, the industry already has had almost 20 years of experience in Europe. With Britain and Denmark leading the way, offshore wind farms currently produce 1.4 GW of renewable energy – or enough to power nearly half a million homes. In all, Europe is planning to develop 120 GW of offshore wind by 2030 – enough to power over 10% of the whole European Union’s electricity needs. 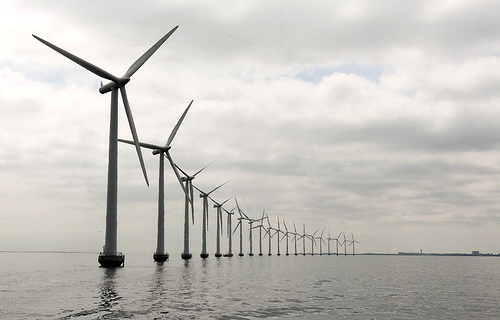 Middelgruden wind farm off the Danish coast.
However for the United States, which possesses more offshore wind power than Great Britain, still has yet to place a single turbine in the water. Developing utility scale offshore wind is not a quick process – initial engineering studies and assessments must be made, usually followed by a small pilot project to refine the initial wind and energy assessment, and then if no local or state laws need to be amended or passed and the project passes through the extensive permitting and environmental review process, the developer can finally begin to woo investors for the billions up dollars that is necessary upfront.
To date, quite a few states including New York, Maine, Rhode Island, Massachusetts, New Jersey, and North Carolina have progressed beyond preliminary studies to looking at actual developer proposals. Yet local opposition (Cape Wind project in Massachusetts), and project budget and financing issues (Long Island Offshore Wind Park) have delayed projects. All in all there is currently over a gigawatt of offshore winds in later stages of execution and development in the United States, these proposals are generally slowed by financing issues, local opposition, and lack of local and state governmental knowledge of how to regulate offshore wind.
Granted, it’s not easy – while competing land-uses and regulations hamper onshore wind power, it’s nothing compared to the competing multiple uses that faces our oceans. Aside from the need to consider where the offshore wind is the strongest; there are shipping lanes, marine mammal and bird migratory routes, sensitive marine ecosystems, fishing grounds, military and naval use areas – all of which must be known when deciding the placement of offshore wind turbines. However the advancement in stakeholder participation in ocean zoning and interagency coordination can alleviate these obstacles. Community engagement early in the process, and involvement of local and state politicians can prevent local opposition and N.I.M.B.Y.ism sentiment against what will end up looking like sails from the coastline. Already several east coast communities have come together in support (both financially and politically) of offshore wind development. It’s time to continue our impressive investment and development of wind power, except this time where it gives the most energy and economic returns: off of our coasts.