The game is on. We will know in 2015 if the industry is likely to narrow down to one clear winning design, or whether there remain many routes to the same destination.

The silhouettes of three-rotor offshore wind turbines on the horizon is familiar to millions of people in coastal regions around the world. But there is no universal design for the drivetrains within the wind turbines’ streamlined nacelles that sit on top of the turbine towers. A fascinating race – based on very different engineering philosophies - is developing as wind turbine manufacturers seek to upscale from the current 1.5 – 5MW offshore wind turbines to the 15MW super wind turbines with rotor diameters of around 145 meters planned for 2015.

Gamesa, the Spanish wind turbine manufacturer, announced at the end of November that it will enter the race to develop a 15MW wind turbine. It hopes to have a prototype ready in 2015. In early December Mitsubishi Power Systems Europe announced plans to invest around €120 million in a Scottish offshore wind R&D centre to develop their 15MW turbine. Mitsubishi also aims to have their turbine ready for 2015.

The technical challenges of the scale-up are daunting. Upwind, an EU-funded project with participation from many of the major industry players including Gamesa, concluded that substantial R&D and industrial effort is still needed to conquer all technical barriers. The new generation of wind turbines need to be more reliable and available, they need to make better utilisation of the wind, and they need to reduce their manufacturing costs, if they are to deliver the ultimate prize – electricity at prices equal to or below the cost of fossil fuel generation.

The only company to attempt the development of a 15MW wind turbine to date - Clipper Windpower – announced in the Autumn that it had run into ‘liquidity’ difficulties, despite the fact that it had already sold its prototype to an agency of the UK government. Clipper’s ‘Britannia’ wind turbine project was subsequently rescued by a 100% acquisition of Clipper’s shares by the engineering multinational UTC. 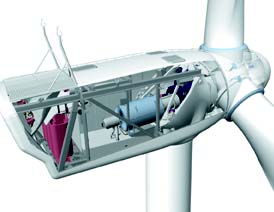 Reducing the weight and size of the drivetrain housed in the nacelle at the top of the wind turbine tower is a crucial area of research for scale-up to 15MW. Today’s standard wind turbine nacelle houses a high-speed generator driven through a three- or four-stage gearbox. That design stacks a lot of heavy, complex technology at a great height. It is difficult and expensive to cconstruct. Larger nacelles tend to be less aerodynamic, affecting efficiency. The nacelle is exposed to considerable forces and vibrations. And maintenance - with the need for specialist vessels - is a major element in an offshore wind turbine’s total life costs.

Direct drive systems can simplify things in the nacelle. Removing the gearbox should deliver improvements in reliability and efficiency leading to reduced maintenance. But direct drive systems that deliver 15MW require very large diameter generators and it has proven difficult to produce direct drive technology that is lighter or more cost-effective than conventional geared drive trains. Today, Enercon is one of very few manufacturers supplying direct drive generators that have an electrical rotor with windings rather than permanent magnets.

In 2007, American Superconductor Corporation (ASMC) began work in partnership with industrial motor manufacturer TECO-Westinghouse on the design of a 10 MW wind turbine that would use high temperature superconducting materials in a direct drive generator system to remove weight from the nacelle. ASMC’s initial data indicates that the 10 MW wind turbine generator will weigh around 120 tonnes, compared to an estimated 300 tonnes for a permanent magnet direct drive 10 MW generator. However, the development timescales for the ASMC solution are unclear. Engineers at the US Department of Energy’s National Wind Turbine Centre, who work with ASMC, have estimated that it may take ten to 15 years to develop commercial HTS solutions for wind turbines.

Because of commercial sensitivities, Clipper did not publicize the details of the drivetrain for their 175-meter Britannia wind turbine with its three 72-meter rotors, each weighing 30 tonnes. Commentators expect the drivetrain to be a development of the ‘hybrid’ drivetrain developed for Clipper’s successful 120-meter high, 2.5 MW Liberty wind turbine.

The Liberty drivetrain is compact, with some of the advantages of a direct drive approach. The shaft from the rotors is connected to a fixed-ratio gearbox that drives four permanent magnet generators. Permanent magnet generators are simpler than the variable speed standard. There are no brushes or slip clutch for instance. The Liberty is reported to have about half the number of parts found in today’s standard turbines.

Each of the four generators is small and light enough to be handled by an internal hoist. The Liberty can continue to generate power when one or more of its generators is out. To improve reliability further, the Liberty’s powertrain is protected by a monitoring system that can detect wear or damage that might need unscheduled maintenance. The monitoring data enables the wind turbine’s managers to limit the possibility of further stress until the problem can be sorted.

Liberty’s fixed ratio gears mean that the generators speed up or slow down with the rotors. Clipper Windpower developed advanced power electronics to deal with this constant variation, fixing the frequency of the power, ready to be fed into the grid. Scaling up their power electronics is likely to be one of many major challenges facing the Britannia project team. The power levels will exceed the capability of power electronic components currently available.

The Norwegian SWAY consortium have worked with the German company Areva Multibrid, developing Areva’s M5000 turbine design for their 10MW offshore wind turbine. Its drivetrain takes a similar approach to Clipper’s in the search for compactness and less weight in the nacelle. A permanent magnet synchronous generator is directly installed in the machine housing. The generator’s rotor shaft is mounted on the output shaft of the gearbox so that it needs no own bearings.

The key area of innovation in the SWAY project is a floating tower. By placing their rotor on the downwind side of the tower, SWAY’s design team have found a way to allow the tower to tilt by more than 5 degrees while its 145-meter diameter rotors remain horizontal, without colliding with the tower. When the wind direction changes, the whole tower turns. Cables on the windward side reinforce the tower, so that a lighter structure can be used.

The latest 15 MW development project announcement, from Mitsubishi, promises a drivetrain that will be “game-changing”.

The Mitsubishi Digital Displacement Transmission (DDT) removes the generator and gearbox from the nacelle, replacing them with a series of much lighter hydraulic pumping modules working in parallel. The hydraulics turn a generator (or series of generators) housed at ground level. Because most of the critical equipment would be at ground level, maintenance costs are slashed. There could be other advantages. Hydraulic systems are much more reliable than mechanical systems in extreme environments. Torsional vibrations generated at the rotor hub would no longer affect the generator. That would improve reliability still further. DDT also enables the use of many common parts that could be easily handled by an internal crane.

However, there are certainly design challenges. A hydraulic system was tried before on a wind turbine and abandoned. Hydraulic systems are likely to be up to 30% less efficient than a mechanical system in moving energy from the turbine blades to the generator input shaft.

But one commentator writing in machinedesign.com before Mitsubishi’s announcement made the case for a DDT type solution:

“Hydraulics offer power density unmatched by any other technology, and power density is precisely what is needed in a wind-turbine nacelle. The efficiency gap may eventually succumb to new technologies like more-efficient fluids to reduce line losses and electrohydraulic-control systems to optimize performance.”

The game is on. We will know in 2015 if the industry is likely to narrow down to one clear winning design, or whether there remain many routes to the same destination. 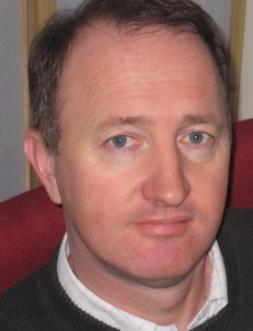 A former editor and managing editor of business magazines, my specialty is explaining complex ideas in simple ways without dumbing down. I write extensively on technology, business and the environment. In a career spanning 20 years, I have also written hundreds of promotional articles, created web sites, and generated thousands of press releases. I have written annual reports for major companies in the UK and the Netherlands. I have reported for consumer magazines from many locations, including a Viking longship and a 'haunted' house. I am completing a Masters Degree in Environmental Management for Business at the University of Cranfield in England, I also have BA Degrees in Law and Economic History, as well as a Postgraduate qualification in the Principles of Senior Management.