Contributed by | BTM Consult – A Part of Navigant Consulting

The 100+ page World Market Update 2010 is BTM Consult’s Sixteenth Edition of this annual wind energy market report. The report includes more than 80 tables and graphs illustrating wind market development – one of the world’s fastest growing industries – a five-year forecast to 2015, and predictions for the market through 2020.
This year’s World Market Updated includes a full chapter dedicated to Direct-Drive WTG versus Gearbox-Equipped WTG. The increased use of the direct-drive turbines across the wind market is impacting the wind industry. The World Market Update 2010 identifies and compares the pros and cons of both the direct-drive and gearbox-equipped concepts, as well as the implications of using permanent magnets on a large scale.
Highlights:
DEMAND AND MARKET GROWTH IN 2010
With 39,404 MW of new installations, the total installed capacity of wind power grew to approximately 200,000 MW. This was an increase in cumulative installations of 25%. In terms of annual installations, there was a modest increase of just 3%. Annual installed capacity has grown by an annual average of 27.4% over the past five years. This outcome happened in the second year after the financial/economic crisis struck the world, including some of the wind industry’s most important mar­kets including the U.S. and Europe.
Highlights on the demand side include:
In the offshore market, nine new projects were installed. The total off­shore installation in 2010 was 1,444 MW Most of new offshore is in­stalled in the UK, but also Denmark and Belgium contributed with large scale projects. Germany saw its second and third project: Baltic 1 and Bard 1 (phase 1) China which entered the offshore arena in 2009 with Donghai Bridge Offshore on the coast off Shanghai and this project was completed in 2010. With a total of 1,444 MW installed in the sea, the cumulative capacity of off shore wind came to 3,554 MW

SUPPLY SIDE AND TOP 10 TURBINE MANUFACTURERS
The most significant change in the supply market was the strong growth of Chinese wind turbine suppliers. Four Chinese companies are now among the Top 10 and with strong positions: Sinovel (No. 2), Goldwind (No.4) and Dongfang (No. 7) and United Power (No10).
Vestas consolidated its leading position with a market share 14.8%. Sinovel (CN) advanced to a No. 2 surpassing GE Energy. Hereafter follows Goldwind(C), Enercon (GE), Suzlon Group (IND), Dongfang (CN), Gamesa (ES), Siemens Wind (DK) and finally, new on the list is United Power (CN)
The five companies below the Top 10 rankings are: Mingyang (CN), Nordex (GE), Mitsubishi (JP) Sewind(CN) and Hara XEMC (CN) 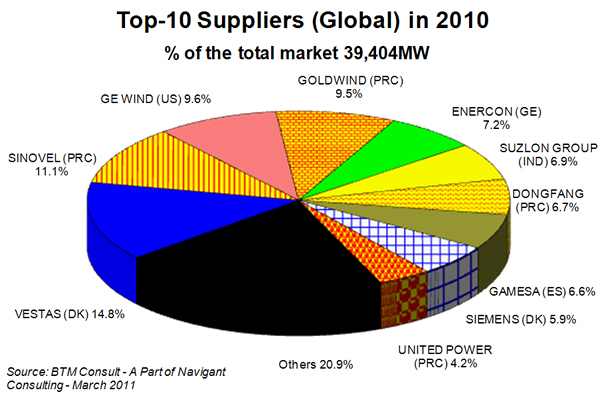 SIGNIFICANT TRENDS IN THE MARKET
The most significant trend in the wind market was the booming Chi­nese wind industry. Additional 2010 included:
ABOUT BTM CONSULT
Founded in 1986, Denmark-based BTM Consult is a premier forecaster and data source for the international wind energy sector. Since 1996 BTM Consult has annually published the highly regarded International Wind Energy Development World Market Update, in addition to several other re­curring globally-focused wind market reports, including its first release of the Offshore Wind Report in 2010. On December 20, 2010, BTM Consult became part of Navigant’s global Energy practice. Additional information about BTM Consult can be found at www.navigant.com/btm.
ABOUT NAVIGANT
Navigant (NYSE: NCI), is a specialized global expert services firm dedi­cated to assisting clients in creating and protecting value in the face of critical business risks and opportunities. Through senior level engage­ment with clients, Navigant professionals combine technical expertise in Disputes and Investigations, Economics, Financial Advisory and Man­agement Consulting, with business pragmatism in the highly regulated Construction, Energy, Financial Services and Healthcare industries to support clients in addressing their most critical business needs. More information about Navigant can be found at www.navigant.com.