Many of the cutting edge thin-film technologies require rare elements that are a finite resource already in short supply. There simply is not enough material on the planet to make these devices for worldwide consumption.

Our future energy requirements depend on reaching the ‘holy grail’ of electricity generation — a cost competitive alternative to coal and natural gas. Despite the environmental impact and waning supply of fossil fuels, the market continues to drive their widespread use as our overwhelming choice in generating more than 70% of our global electricity. The availability of an alternative energy source would also contribute significantly to energy self-sufficiency in North America.

Every hour more energy from the sun hits the earth than the world’s entire population consumes in a single year. Given this abundance, solar energy is our world’s most obvious energy choice. However, 2010 data indicated only 1% of our global electricity supply came from solar energy. The number is small, but the PV market has grown from a mere 1.75 GW of installation in 2006 to an industry projection of 100 GW in 2013 (EPIA Global Market Outlook for 2015). The continued reality of the imbalance between solar electric, coal and natural gas is pure economics.

In 2010, The National Academy of Sciences reported the real cost of using fossil fuels (pollution and greenhouse gas emissions) added another $120 billion to market cost, not to mention the long-term costs to our environment, some irreversible. But in a market driven economy, future impact is not the driving force, but rather the reality that the wholesale cost of electricity from natural gas and coal is substantially lower than solar energy today.

Despite the huge growth of solar photovoltaic (PV) installations in 2010 (with 129% growth the global market reached16.6 GW), the market continues to experience limitations involving either efficiency or expense. These limitations have prevented solar power from competing effectively with fossil fuels. Additionally, many of the cutting edge thin-film technologies require rare elements that are a finite resource already in short supply. There simply is not enough material on the planet to make these devices for worldwide consumption.

“The biggest barrier to solar energy becoming the dominant source of electricity globally is expense,” says Dr. Andras G. Pattantyus-Abraham, Chief Technology Officer, Quantum Solar Power Corporation. “The obvious lesson learned from the bankruptcy of Solyndra and Evergreen is the industry is focused on price. Currently, the most cost competitive solutions are the thin-film PV technologies CdTe and CIGS, but in the long term, given the short supply of indium and tellurium, an alternative solution will need to be developed within thin-film manufacturing in order to remain cost competitive.”

In order for solar energy to meet current economic demands it must solve three key issues that have previously limited its acceptance — efficiency, price, and the removal of rare elements used in production. Current solar photovoltaic (PV) technologies generate electrical power by converting solar radiation into an electric current using semiconductor layer made from either crystalline silicon or what’s called a thin-film layer of exotic materials. Silicon PV technologies have been the standard approach since the 1950’s and currently offer the highest efficiencies. Although silicon ingot prices have dropped in recent years, silicon PV still remains more expensive than thin-film modules. While novel cross-over approaches like amorphous silicon have gained ground by applying silicon semiconductors at a thin-film level, the least expensive PV module is a cadmium telluride (CdTe) thin-film product. Despite thin-film’s cost advantage and increasing efficiencies, it remains 3 - 7% less efficient than the leading silicon PV. The elephant in the thin-film room is, however, materials.

The leading thin-film products primarily use rare elements to create their semiconductor layers at very small scales (1-8 µm). Elements such as gallium arsenide, tellurium and indium have limited global supplies that are controlled by only a few countries. In the case of tellurium, used in the leading thin-film First Solar (CdTe), there are only two known high concentration deposits in China and Mexico. Tellurium is the second scarcest byproduct metal next to gold and is mainly a byproduct of copper ore production. With consumption steadily climbing and only a little over 125 MT being produced annually, tellurium prices have more than doubled since 2007. In fact, looking at First Solar’s projections for reducing their $/Watt manufacturing costs, materials are not mentioned as an area in which they see potential reductions. If thin-film is to emerge as a viable alternative, and is indeed the ‘holy grail’ photovoltaic solution, it must overcome this rare element restriction.

Lastly, with China now as major producer of crystalline silicon PV, it is likely they will more strictly control exports of tellurium in the future as they move into thin-film markets. Hanergy, a Chinese solar PV company recently announced a $626 million investment in new 1.5 GW thin-film production and research and development facilities. Other Chinese manufacturers have hinted at moving in the direction of thin-film as well, and some already are. Seven out of the top 10 solar PV manufacturers are currently Chinese companies. The estimated 2011 production capacity of the top ten manufacturers is more than 19 GW. The Chinese represent 13 GW of this amount. Therefore, as these companies begin to move in the direction of thin-film production, the issue of rare element supply becomes more serious.

At Quantum Solar Power Corp., we are developing a solar PV device which we believe will address all three critical success factors — high efficiency, low cost, and high scalability through the use of abundant non-toxic materials. Our novel approach focuses on eliminating the costly and sometimes exotic semiconductor absorbers used in the vast majority of photovoltaics. Utilizing widely available materials, the Quantum device aims at cutting thin-film materials costs in half. If materials costs represent 45% or more of PV manufacturing, a 50% reduction would be a monumental step toward solar becoming the obvious economic choice.

Leading silicon efficiencies in the industry are currently at 20 to 22% power conversion efficiency (PCE) for crystalline silicon PV and 15 to 17% for thin-film. Our modeling demonstrates a potential to achieve efficiencies (PCE) above 20%, thereby fulfilling another of the critical competitive factors related to the PV industry. Although cost is driving the PV market currently, long-term success is dependent on maintaining high levels of efficiency in order to maximize electrical capacity.

Quantum evaluated the leading solar technologies and determined the limitations on solar were related to the methods used for absorbing energy. The device currently in development is expressly focused on this component of solar PV. Our goal at Quantum is to deliver a PV device that matches or exceeds the highest efficiencies currently available, while fitting into a thin-film manufacturing model that eliminates rare elements, and therefore drastically cuts the module costs.

In the fall of 2008, Dr. Gary Leach, Lead Scientist at Quantum and the Director, Photonic Systems, 4D LABS and a team of scientists began work at Simon Fraser University (SFU), a Canadian public research university in British Columbia. SFU was identified early on in the formation of Quantum Solar Power as a key resource given their newly built, state-of-the-art research and fabrication facilities. 4D Labs opened in 2007 as a cutting-edge facility for optics and nanoscience research, and had installed leading edge tools and a 4,000 ft2 clean room.

After a careful analysis of the limitations to PV technologies at that time, in concert with novel ideas of their own, they hypothesized a completely new approach to solar cell design. In October of 2008 they embarked on a proof of concept design for a new device. By March of 2009, it became apparent to Dr. Leach and his team that their proof of concept was indeed viable. Dr. Andras G. Pattantyus-Abraham met Dr. Leach at a nanotechnology presentation at SFU in the summer of 2009. Dr. Pattantyus-Abraham was engaged in semiconductor nanoparticle research at the Sargent Group at the University of Toronto at the time. Convinced that Quantum’s approach promised a true ‘holy grail’ solution, he joined Quantum in late 2009 as our CTO.

Since early 2010 Quantum’s lab in Burnaby, B.C., Canada, with its team of 14 leading experts in nanotechnology, physical chemistry, optics and physics, has been fine-tuning a prototype PV device. In June of 2011, Quantum entered their second phase of research ramping up the device’s output results. Future research and development will focus on key partnerships in research and manufacturing, as well as National Renewable Energy Lab (NREL) certification.

It is important for our geopolitical future that we create a clean energy economy along with a strong energy policy. A sunny future for our children demands that we continue to create green sector jobs that replace our dependency on fossil fuels with renewable energy through wind turbines, hydro-electric power and solar photovoltaic technologies that make solar energy a globally deployable, environmentally smart energy source.

If the barriers to cost, efficiency and scalability can be met with technology as promising as the developments at Quantum Solar, the solar industry could shift dramatically from making a marginal contribution on our energy supply to becoming the dominant force in coming years. Any solar cell technology that can achieve matching or superior efficiencies to leading technologies at a lower cost while remaining free of rare materials is unquestionably a disruptive technology, and will significantly contribute to making solar PV the dominant electricity resource for our planet. 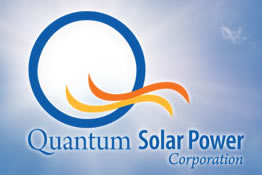 Steven J. E. Pleging is Chief Executive Officer, President & Director of Quantum Solar Power Corp., www.quantumsp.com, which is developing a disruptive photovoltaic technology. Mr. Pleging lives in Berghem, Noord-Brabant, Netherlands and travels between the Company’s offices in Vancouver BC and Düsseldorf, Germany. He can be reached at info@quantumsp.com