Crystalline and thin film solar modules have different strengths and weaknesses, and do not perform equally in the same applications. Which technology is best suited for a particular solar project depends to a large degree on the specific project goals and unique site characteristics.

While reliable, third party performance predictions can easily be obtained for crystalline silicon modules; the same is not true for the various thin film technologies in the marketplace. Customers and solar developers are often left having to extrapolate from marketing claims and a small number of site-specific studies to make predictions about which is the best technology to use for their own project. Factors such as differing orientation and attachment options, different area requirements, and differing technical limitations between crystalline and thin film technologies make the task of translating study results to real-world applications daunting or impossible. As a result, marketing claims from competing manufactures can obfuscate what should be a transparent comparison.

The Metropolitan Sewer District of Greater Cincinnati approached us to provide approximately 30kW of solar for their new LEED Gold Certified Wastewater Engineering Building in Cincinnati, to be deployed on a flat roof designed to be regularly viewed by the public for its showcase energy and storm water management technologies. This working demonstration site with its flat roof typical of commercial construction and excellent solar resource offered an ideal spot to initiate a Midwest-specific study of two typical solar technology types.

The two modules types represent commonly used modules from industry leading manufacturers, UNI-SOLAR and SunPower. Each system employs three SMA-SB-5000US inverters, and apart from the modules and their mounting styles, all other components of the two systems are identical. The systems are located adjacent to each other on a single, newly constructed, white TPO membrane roof. Both systems experience identical shading of 4.16%. Electrical performance and environmental parameter monitoring are performed by SMA Sunny Webbox and Sunny Sensorbox respectively.

Electrical performance data and environmental conditions for both systems are available to the public here.

Recorded data for each system include:

Both systems were installed at the same time and commissioned in March 2010. The first full month of data production began in April 2010. A crystalline module was cracked during construction and had to be replaced. As a result, the SunPower system operated without one string of modules for the first week of April 2010. Since then, both systems have been 100% operational.

Both systems are exceeding predicted production levels by comfortable margins of 8% and 14% for UNI-SOLAR and SunPower respectively. Performance above predicted values is of limited utility, however, as this depends on the level of aggressive or conservative assumptions used to generate the predictions.

More useful is the data comparing the two systems directly to each other. As shown in Figure 1, over the first 17 months of operation the crystalline system has produced 11% more energy than the thin film. 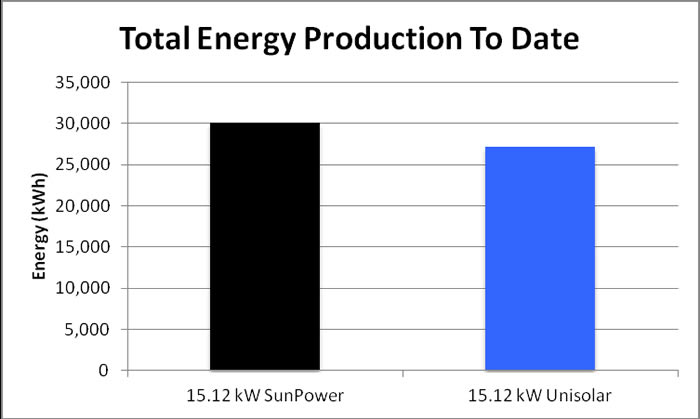 Because of physical differences, thin film solar cells are generally more sensitive to indirect sunlight, low light conditions and do not lose as much performance with temperature increases as crystalline. As a result, in a side-by-side situation with equal tilt angles in a region of significant cloudiness, indirect sunlight and high temperatures, (such as Cincinnati, Ohio) one would expect the thin film product to outperform a crystalline solar module. Industry expectations are that thin film should outperform by about 5% in side-by-side tests with equal orientations.

However, the predominant method of mounting thin film laminates is to adhere them to the roof in a flat orientation. This results in significantly different sunlight exposures and temperature profiles and makes equal-orientation comparison studies inapplicable. For any solar module, thin film or crystalline, a 10 degree change in tilt can have more than a 5% impact on performance.

This study confirms this expectation.

We expect any solar system’s production to rise and fall with the seasons. Figure 2 shows this monthly variability and also shows that the crystalline system slightly outperforms the thin film system every month except December. December 2010 had high levels of snowfall.

The difference between the systems’ production is greatest in the spring and fall. This is consistent with the expectations that thin film should excel in the low light conditions of winter and the high temperature conditions of summer, whereas crystalline technology excels during spring and fall when direct solar radiation is strong and temperatures are cool. 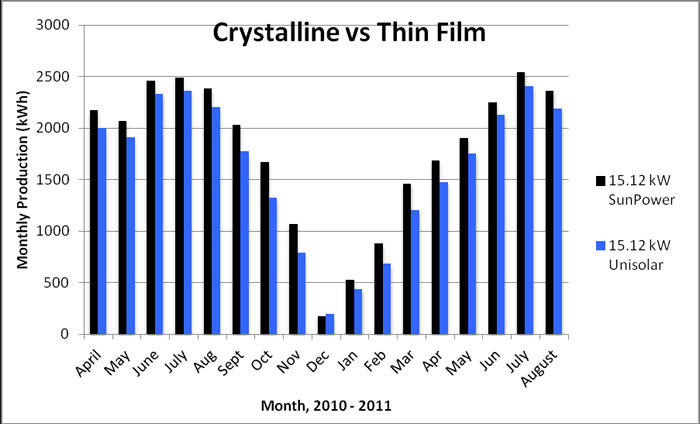 However, there are also performance impacts associated with differences in tilt and airspace between the modules and roof for each technology. The SunPower modules have 10 deg tilt and are separated from the roof by between 2” – 12”, with significant open space for airflow around the  modules. The UNI-SOLAR laminate modules are adhered flat against the roof membrane and are in good thermal contact with the upper roof membrane. This zero-tilt, flush mounting arrangement reduces solar insolation capture and subjects the modules to any additional heat that may penetrate the roof’s insulation.

These factors, imposed by the different mounting requirements of each system, have performance impacts that more than offset the side-by-side differences in temperature and light sensitivity of the two technology types.

The MSD building on which these systems are located is newly constructed to LEED Gold standards, so the amount of heat escaping the building into the thin film modules should be close to the minimum possible for current commercial construction. Unfortunately, the cell temperature probes used in this study did not perform correctly for the first several months, so we do not yet have sufficient temperature data to examine these effects quantitatively.

UNI-SOLAR now manufactures a tilt system for their PVL thin-film laminates that addresses these issues. Nonetheless, the predominant method of application to date has been flat-adhered. As with any ballasted racking system (for crystalline or thin-film), this approach requires additional weight for ballast and necessitates spreading the modules apart to avoid inter-row shading. Thus, the tiltsystem has the net effect of mitigating one of UNI-SOLAR 's primary advantages, that of low structural loading, while only increasing it’s primary weakness: that of lower power-density and the need for greater array footprint and longer wire runs.

Most important to customers and solar developers is how much energy per unit of capacity each type of system will generate. This is the specific yield (kWh/kW/yr) and it allows systems of different sizes to be easily compared. Converting the lifetime total production numbers to specific yields results in the following values shown in Figure 3. 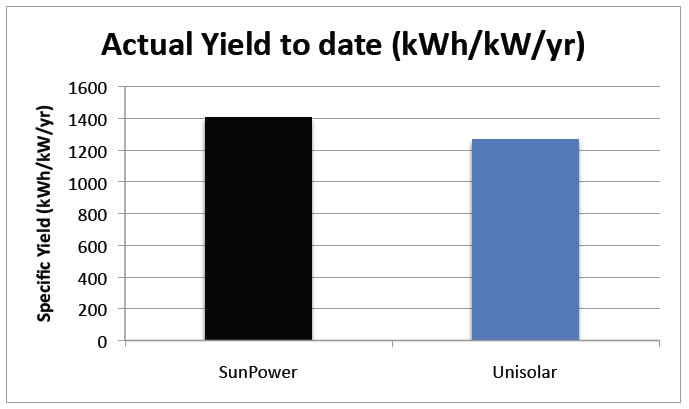 The dataset is still of too short a duration to use these specific yields for their absolute value since the data covers two summers and one winter. However, their relative values are quite useful. Specific yield for the crystalline modules on a 10-degree tilt racking system is 11% greater than that of amorphous silicon modules mounted flat and adhered to the roof membrane.

PV performance modeling for the MSD site predicts that simply increasing tilt angle from 0-deg to 10 deg will result in a 7.4 % performance boost for the same module type. The actual performance data to date shows the tilted system exceeding this expectation by 3.6%.

That the tilted crystalline system has performed 3.6% better than would be expected from geometrical differences alone, stands in stark contrast to the commonly held expectation that the thin film should produce more kWh/kW/yr in side-by-side, equal orientation tests.

This difference may be attributable to heat effects from the building, variations in the weather from long-term averages, and physical differences between the different solar cell types. Longer-term study and further analysis of the environmental data will help determine the magnitudes of each of these effects.

This project was made possible by the tremendous support of: