The 2012 NAIAS or North American International Auto Show is coming to a close. The first Auto Show was held in 1907 known as The Detroit Auto Show and in the ensuing years we have seen all sorts of new cars unveiled. This year 40, and a few people will remember the excitement of the unveiling of the second incarnation of the VW Beetle. This year the Dodge Dart and the Ford Focus seem to have garnered lots of attention and admiration.

This is the largest and most prestigious event in Michigan and here you get to see possibly your next vehicle having compared and established your likes and dislikes. It's the seminal event in the Midwest and this year some 5000 media people were in attendance so there are lots of articles and places to read about the offerings.

The excitement was palpable this year and a far cry from 2009 when we were in the depths of despair and GM's display backdrop was simply tall, grey drapes. But there was one shocker there and that was the Converj, clearly one of the finest automobiles ever, and pretty much the sole inspiring vehicle of the show. That vehicle emanated hope and delight for the future like none other.

So now we hear that there will be some 750,000 people in attendance ,and the NHTSA has declared the Volt, and the voluntary corrections to be fine, and that no investigation is needed ,and that GM is once again the World's largest Automaker despite Mitt Romney's call to let it flop.

It seemed that the foreign intervention of the recent past has caused some denial to be lifted. Certainly their 4 passenger vehicles are now being challenged in excellence and beauty by some wonderful vehicles from the Big Three or the Detroit Three.  It is interesting that When Henry Ford set the world on a new course he produced essentially 4 wheeled vehicles carrying 4 passengers and being powered by 4 cylinder engines. We are back to that now.  And an awful lot has been learned and reconfigured in the meantime.

What is especially important to note this time is that this has been the climax of a vigorous period of Power Train development. Many manufacturers are now offering all sorts of alternatives and new high efficiency ICE packages (Internal Combustion Engine) with all sorts of improvements including turbocharging and transmissions with up to 6 speeds now exist.

When Nils Joel Skrubb, an engine designer at Packard, was handed the blue prints of the Rolls Royce Merlin, he set about for six months memorizing the engine and figuring out the conversions to the wonderful American Engineering Standards and thinking through new enhancements and production issues, before sitting down to quickly draw his improved version. The new Packard Merlin was a masterpiece. And it too was turbocharged so there is something similar going on here.  Goering heard the engine and saw the P51 and proclaimed that the war was over.  His boss refused to understand.

Soon virtually every manufacturer will offer choices to their customers. Grouse as much as you wish, and say that politicians have forced this, but they knew that something had to happen and we are seeing it now.  And it is astounding and would have been unbelievable just a few years ago.

Interestingly GM, in producing the Eco Cruze which can achieve some 42mpg and look very handsome and be very comfortable has shown us that they were on the mark.  It looks like intelligence has not vanished from Detroit.

When we covered the Progressive Insurance X-Prize. which was ignored by the Mainstream Automotive Journalists, it became clearly evident that 100+ mpg would soon be readily available for automobiles and 200+ mpg would be available for motorcycles which look like HPV racers which now hit close to 80mph. The Peraves Monotracer, which seems to change names depending upon which competition it is in, has proven this to be true. And it became evident that Electric Powered Vehicles (EPV's) would outperform those with ICE Power Trains no matter what the fuel or the carburation.  That was the clear and wonderful signal from that competition.

So now the new electric powered millennial era is upon us and because it is the most economical, vehicles with electric power-trains will win and very soon because all manufacturers can no longer avoid them. Many R & D efforts will fall by the wayside.

On the lower level of the show there was a driving course for alternatively powered vehicles. This year I drove all 12 and one thing was clearly evident. The electrically powered vehicles were super quiet, in some cases hard to detect if the were “on”, had nice, snappy acceleration and gave the most comfortable rides of all. Henry would have smiled and chuckled. 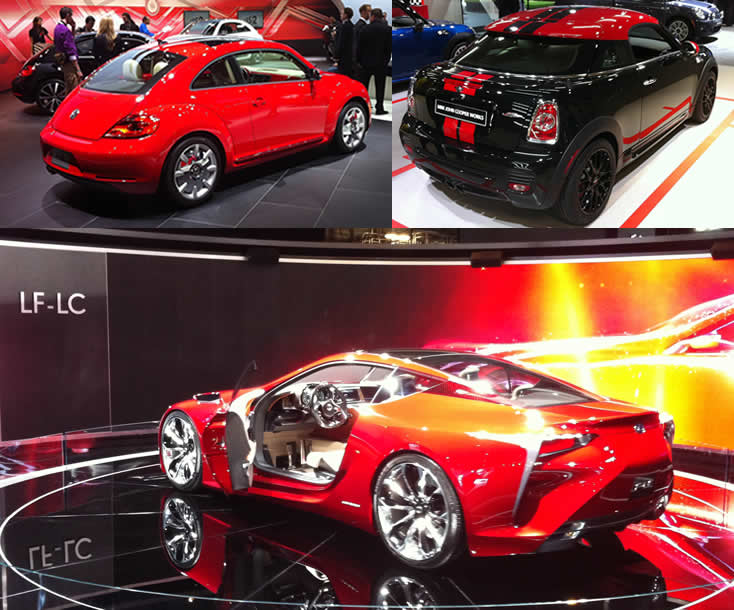 When I was in college there was a woman who would drive into town in her black Detroit Electric and she would jump down from the car with it's huge tires and curved glass corner windows with flower vase brackets wearing a black satin dress with very high top laced up boots.  And she was very lithe and  beautiful with a twinkle in her eye and a huge smile. I recently saw the car again, now gussied up with an imagined navy blue body and black trim when Bob Lutz appeared for a book signing at a meeting of the Ypsilanti Car Guys.

So again 100 years later a new revolution is upon us.

An interesting aspect of this show was that the Mainstream Auto writers selected the Land Rover Range Rover Evoque as the Truck of the year (Ed Mullally at Ford said let it go) and the Hyundai Elantra as the Car of the year while the Auto Designers selected the new Ford Focus as the Production Car of the Year and the Nissan LS LC as the Concept vehicle of the year. This is the second time that a Korean Manufacturer has won causing some consternation locally. I suppose that we should mention that perhaps all those 62 years of protecting Freedom and Democracy against a Communist Dictatorship has paid off unless young Mr. Kim nukes them.

So it's interesting that having driven and reviewed the Volt for this magazine, I am hardly interested any more in ICE powered vehicles.  And it interests me, after the unfortunate fire 2 weeks after the crash that GM elected to place the batteries in a T shape enclosure which mimics the drive tunnel and the rear axle in plan. This decision has been chosen to protect the vehicle batteries by having the vital organs placed well within the body of the vehicle for safety purposes.  The Tesla and another California manufacturer of electric vehicles, following Tesla have placed their batteries in a flat pancake configuration as the floor of the vehicle.  Now this strikes me as being an instance of lack of experience in manufacturing vehicles. Clearly in a side impact those batteries would be struck and damaged. No point in mentioning the other consequence.

Now despite all the hoopla and beautiful Cars, stunning female models, and lavish display areas I think that the Mainstream Automotive writers have missed the most important unveiling of the show because it was mundane in appearance.  By happenstance I came up from the test drives and walked by the VIA booth and noticed that Bob Lutz was going to give a presentation. So Immediately hit the breaks and sat down to listen to the most dramatic thing that I have heard about the industry in recent years.  I think that you should note that Bob is the Steve Jobs of the Automotive World, having been behind the development of so many wonderful vehicles for a number of Automotive Companies both in Europe and the US. In my book he is Numero Uno. No Question. The Volt and the Cadillac ELR are his most recent.

So in the industry, this is the most Dramatic Advance in the past 112 years.

A movie was shown where Bob Explains what VIA is manufacturing and that it was about  Pickup Trucks, Big Vans and SUV's. The company is taking GM vehicles, stripping the engine and replacing it with an electric Motor and generator and a smaller ICE engine to power the generator... what is called a MG Set or Motor Generator Set. This is the configuration in the Submarines of WWII. Power Up at night and run electric by day. It also is the way our rail roads are powered now with Diesel Engines producing the power to feed the electric motor to power the Locomotives. 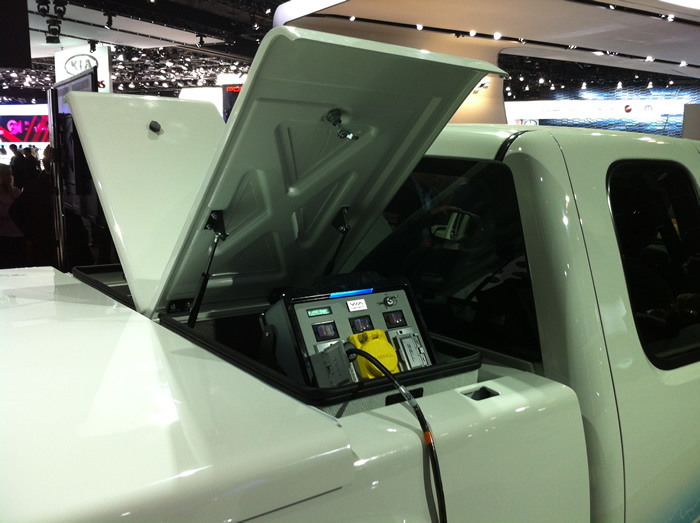 What was pointed out was the economics of the situation.  Under the current CAFE regulations which try and impose higher mileage restrictions the engine designers have hit the upper limit of around 15 to 17 MPG. With the electric motor and Batteries, the vehicles can hit 100mpgE.  That is 5.88 to 6.67 times more efficient!  And under electrical power the vehicles can travel some 40 miles without having to start the smaller ICE and the added advantage is that you can also use your vehicle to power your power tools or provide electrical power to your house in case of a circuit breakage. A side benefit is that maintenance also is much lower, with the brakes and tires lasting longer.  The vehicle with the conversion is actually far less costly to own and operate over a normal truck lifetime because of the huge savings in fuel and maintenance costs.

VIA is currently aiming at fleet sales and the three vehicles at the show were with PG&E logos and the president of the Company vouched for their conversions. DTE also was mentioned in the movie. So it is apparent that the huge electric energy suppliers, sensitive to the costs of energy, are abundantly aware of the great cost savings.

There is a secret to all this and it lies in a very small package, a 11” dia 11” long electric motor that weighs slightly more than 100 pounds and outputs 402 HP and was sitting on a thin glass side table. Now if you don't find that incredible you should know that the GM Research Staff at the GM Research Center performed elaborate studies on magnets and this traction motor has high density permanent magnets most probably because of this.

Now the manufacturer of this motor and it's attendant generator which fits in a casing from the same mold is by REMY Manufacturing which split apart from Delco-REMY. So there is some profound engineering intelligence in the development of this device.

REMY also is the supplier of the huge Drive-trains for the Locomotive world so you know that there is experience in this team.

So despite all the glamor, the real winner, the game changer, the quantum leaper, the watershed moment was here at the Autoshow and the Mainstream Automotive Writer's completely missed it. 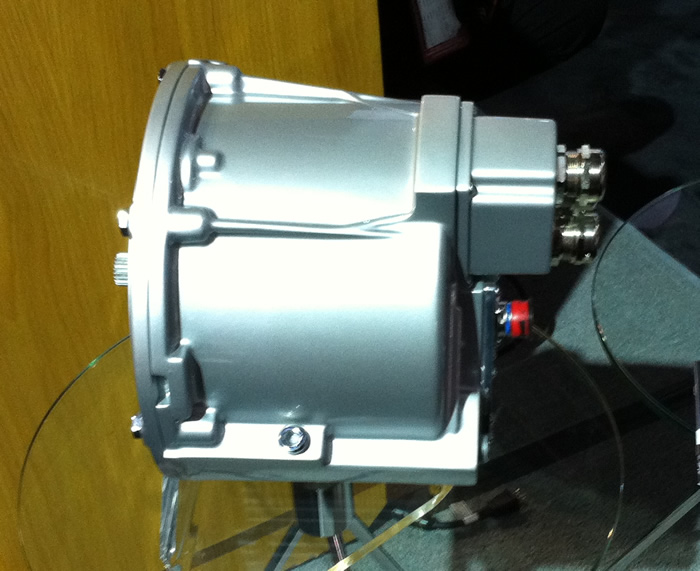 Not in Retirement, never will be.