In Uniaro Community before the implementation of this project, the community people are used to the traditional energy sources like paraffin lamps , candles and kerosene lanterns for lighting at night. This situation exposed them to various respiratory disease associated with the burning of hydrocarbon based fuel to generate heat and light energy. This is contributed to global warming by the release of CO2 into the atmosphere there having negative effect on the environment.

The project titled: “Promoting Environmental Sustainability through the use of Central Solar Charging Station as Clean Energy Source for lighting in Uniaro Community” was implemented by the Community Research and Development Centre (CREDC) as part of her PREEEN Project (Promoting Renewable Energy and Energy Efficiency in Nigeria). It was implemented with support from the Switzerland Embassy Nigeria (Abuja).

In Uniaro Community before the implementation of this project, the community people are used to the traditional energy sources like  paraffin lamps , candles and kerosene lanterns for lighting at night. This situation exposed them to various respiratory disease associated with the burning of hydrocarbon based fuel to generate heat and light energy. This is contributed to global warming by the release of CO2 into the atmosphere there having negative effect on the environment.

The objectives of the project were to; 1. Create awareness on the negative effect of Unsustainable energy sources (kerosene and other fuel sources) on our environment, 2. Provide access to clean energy and health compatible sources for lighting in order to reduce CO2 emission in Uniarho community, 3. Empower the youths of the community so as to be able to position their self in the emerging Renewable Energy Market, 4. Reduce the poverty in the community through household savings on energy bills and provide employment for the three members of LERC and 5. Empower three members of the community by train them on financial management/booking of all daily transactions with beneficiaries, technicalities involved in the charging procedures and maintenance of the facility.  Project activities as stated in this report includes; Training Workshop, Installation Activities and Appraisal Workshop.

The one week training workshop for the 15 youths of Uniaro Community started on the 22nd and ended 29th of August 2012. The training which took place at the Community Youth Association Hall focused on how the different parts of a solar charging facility works, how to install each components and their maintenance. The workshop had in attendance the 15 youths of the community that will be trained on the installation and maintenance of solar systems and the 3 Local Energy Regulatory Committee (LERC) members. 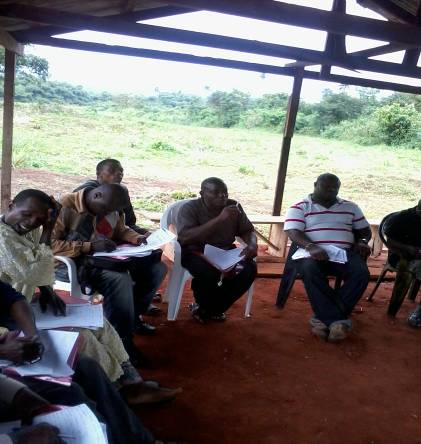 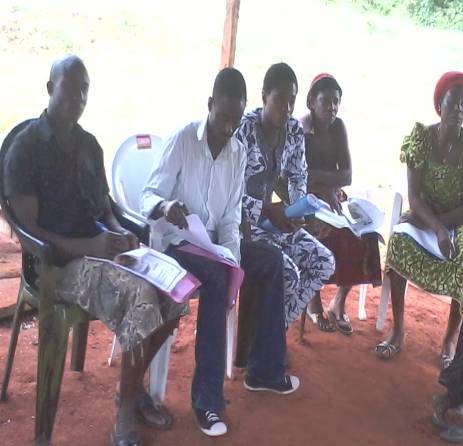 Addressing the participants before the training began, the Project Manager, Mr. Ogbemudia thanked the people for coming on time and the interest they had for the project. He told them that the project was been sponsored by the Switzerland Embassy Abuja here in Nigeria. According to him, the project seeks to ensure the sustainable management of the environment through the use of clean energy sources that is environmentally friendly to replace one kerosene lantern for each benefiting households. He added that the project will also help reduce poverty in the community by given employment to the LERC members, empowering the 15 youths as solar technicians , reduce household income spent on kerosene by beneficiaries and the health hazards they are prone to when using kerosene lamps and other unsustainable sources. 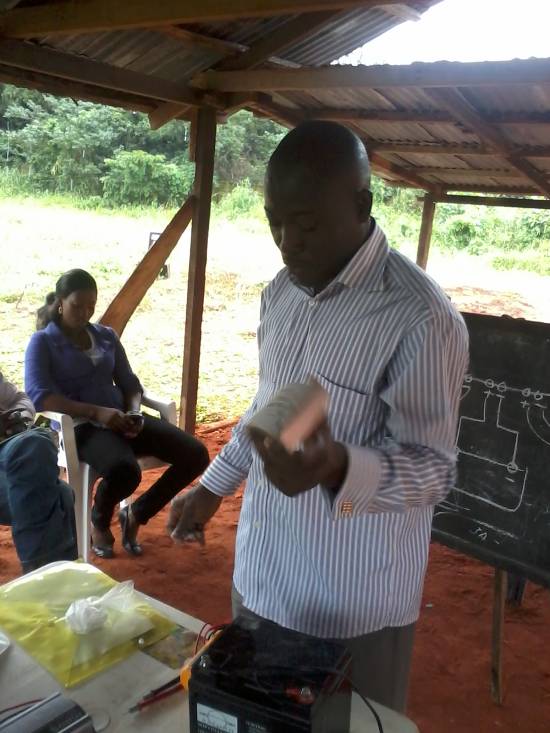 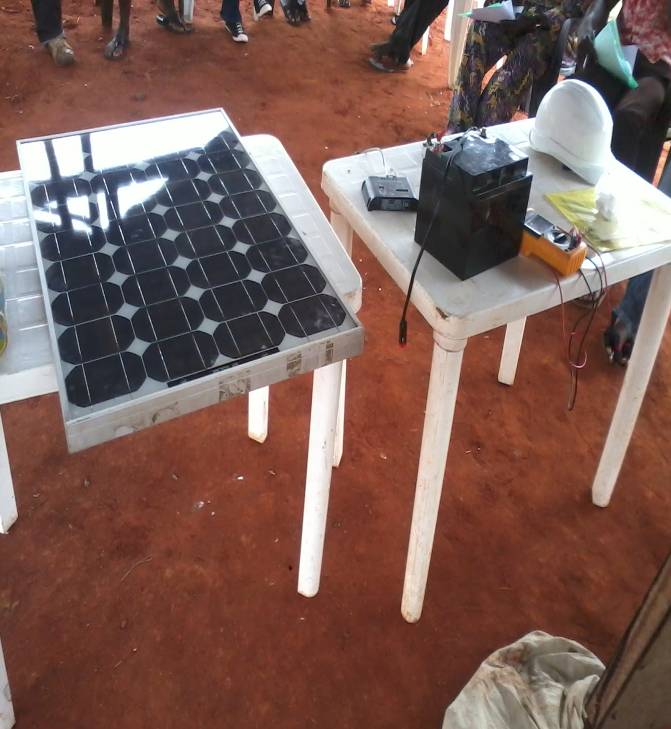 During the training section, the trainer Engineer Valentine told the people that the sun has so many ways its energy can be utilized and amongst them are the ones they are already used to like using the sun to dry their farm produce, dry the washed clothes e.tc. He said that the sun energy which is also known as solar energy can be converted to electricity using Solar Photovoltaic (PV).  He said solar panels must be positioned in such a way to get maximum radiation from the sun daily. According to him, Nigeria is located on the southern hemisphere and as such, all panels should be oriented due south. Panels will produce more power at noon day because the sun intensity is high at that time.

He also told the trainees that the tilt angle of the panel is another thing to take note of and suggested that panels in Nigeria should be tilted between 10-15o . This will aid the easy washing away of dust from the panel surface by rain.

According to him, the solar panel is made up of solar cells and these solar cells are made from silicon which is a semi-conductor. Each solar cell can generate up to 0.5 volts. He said it is the solar cells that convert the solar energy from the sun which falls on the solar panel surface to electricity. The solar system is made up a solar panel, charge controller, battery and inverter.  He reminded them that the sun shine will not always be there but with the battery, charges are stored to be used when needed and therefore advised that the system should not be used not until the need arises. The charge controller is to control the flow of charge into and out of the battery.  In the case of this project, the charger has an inbuilt controller which regulates charge flow from the panel and the batteries.

The installation activities were broken into five stages namely; site preparation, the civil engineering work, mounting of the central charging station, installation of the components of the Central solar Charging Station and the indoor lighting kits.

Having unanimously chosen the site for the Project which is centrally located in the community by the elders and the youths of the community, it became necessary to make sure that there was no obstructions to the sun rays around the project site. Trees around the site were cut down with motor saw, stumps removed and the ground was leveled properly so as to make the civil engineering work easy. The community youth leader, Mr. Monday made sure that all that was needed to be done was done. 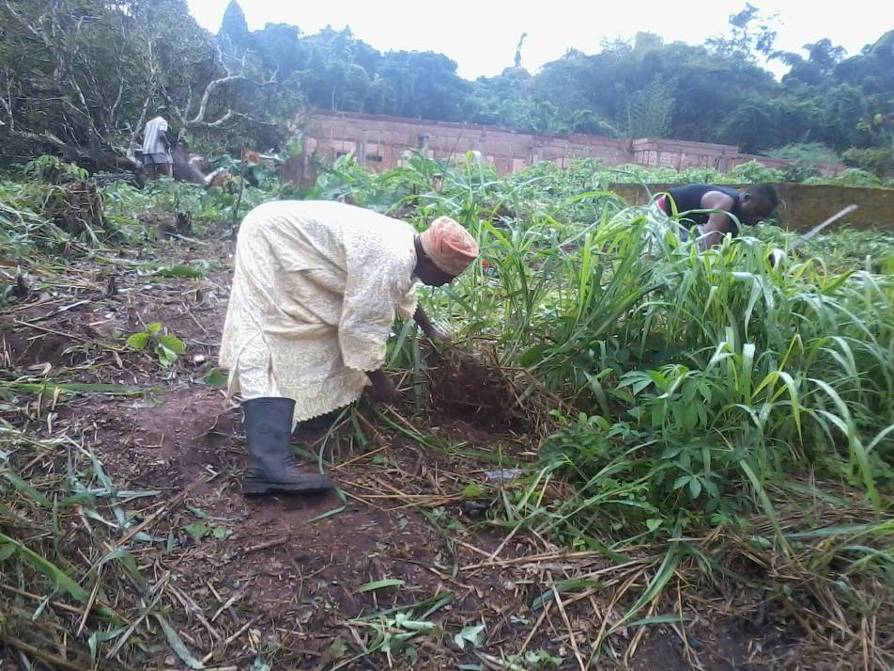 Project Site been cleard by some youths of Uniaro Community

In order to erect a Central Charging station which will be able to carry the weight of the solar panels and also for the facility to last long for the community people, a concrete base on which the fabricated metal building will rest was constructed. The dimension of the metal building is 8feet by 10feet and so, a concrete base which has a dimension of 9feet by 11feet was constructed.

The  Dam Proof Course (DPC) for the metal fabricated building was done by first digging the foundation  which was fortified  with concrate and thereafter, a wall of about two(2) coahes heigh was raised round the foundation using six inches blocks. The DPC  was left to solidify for one day before the concrate floor was casted using grinite, cements , sand and water. 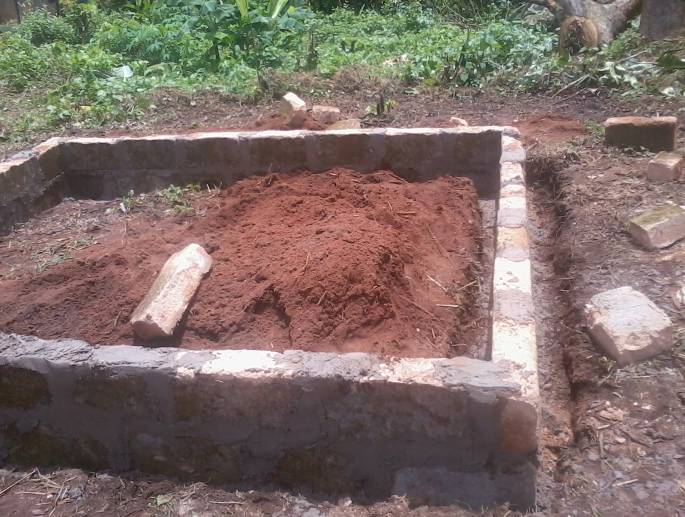 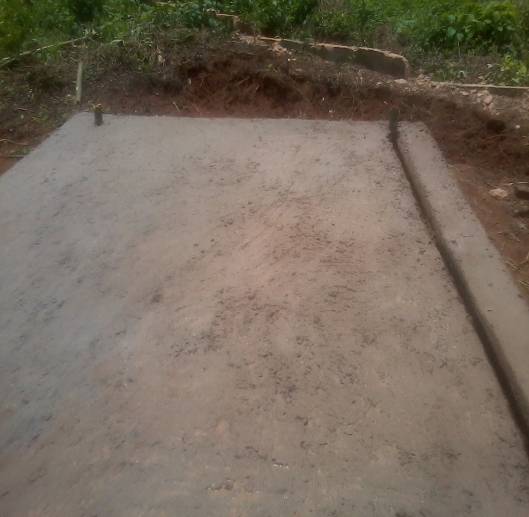 Mounting of the Central Charging station

The central charging station was mounted four days after the base support has been completed. This was to give enough time for any moisture in it to dry up completely. The fabricated metal building was transported from Benin City to the community. The youths of the Community under the supervision of their youth leader Mr. Monday ensured that the metal building was carried off the truck and carefully positioned on the already marked out place on the base. 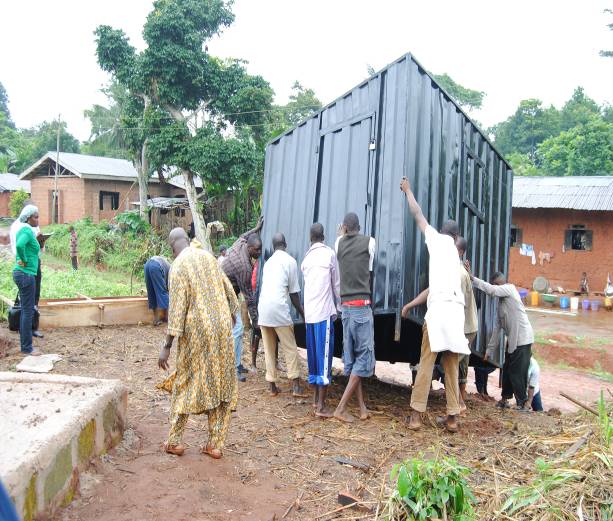 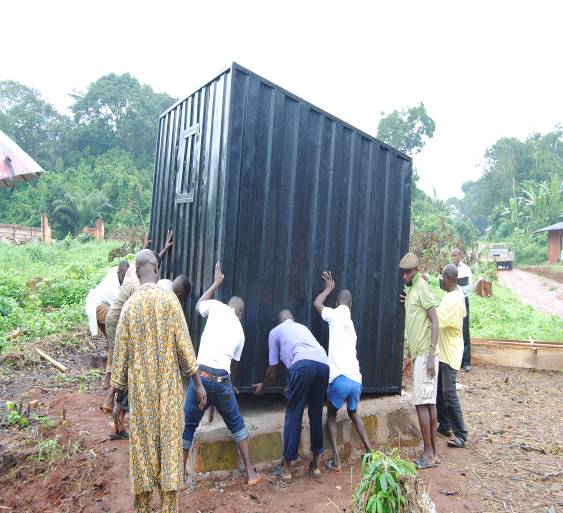 The fabricated Metal building being carried and positioned by Uniaro Youths

Installation of various components of the Central Solar Charging Station

Installation was carried out by the trained youths under the supervision of Engineer Valentine. He tested the knowledge of the trainees by asking them questions based on what they have been taught previously about solar system. The components to be installed include eight (8) solar panels of 90watts each, four (4) Reservoir batteries and four (4) chargers with ten charging units each. 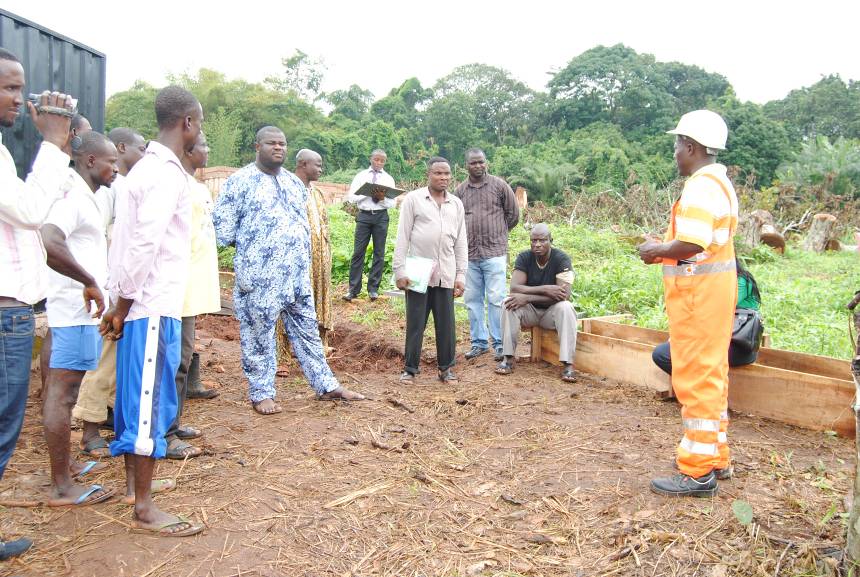 Valentine (CREDC staff) addressing some of the trainees

Two solar panel supports were constructed to accommodate four panels each.The Solar panels were fixed using stainless steel bolts, washers and nuts to the panel support. The panels were later wired  parallel of two, to give four cable outlet of (+) (-)  which will be connected to the charger. 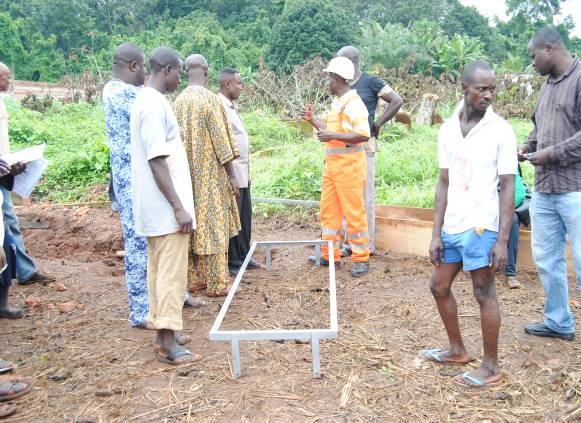 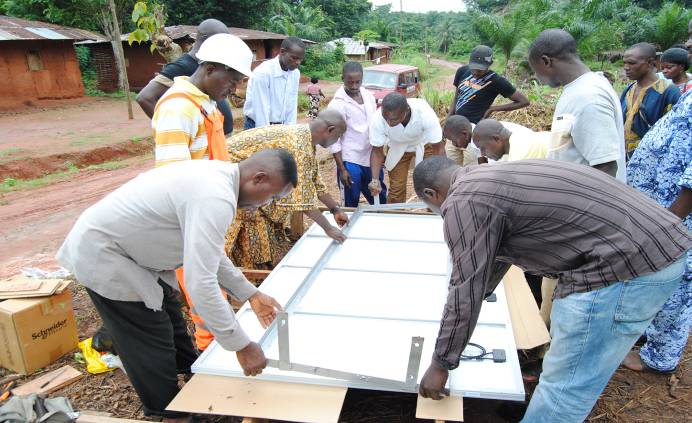 Trainees bolting the panels to the fabricated panel support

The trainees were divided into two groups with the reponsibility of assembling four solar panels each to the panel support and then mount it on top of the building. This gave them the opportunity to practically carry out what they have been taught during the workshop. 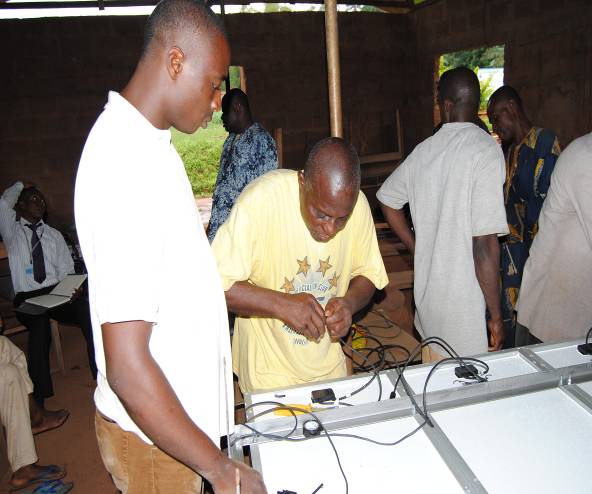 The whole assembly which include the solar panels already wired and the panel support were carried by the trainees to the top of the building were each of them were mounted firmly.  Cables running from the panels were connected to the charger and the charge were also connected to the reservoir batteries. The reservoir batteries are met to supply charges to the charger during prolong period of days without sunshine. Each charge has a ten chrging outlets for charging 10 backup battery packs for the indoor lighting. The charge also have outlet for charging mobile phones of different charging pots. 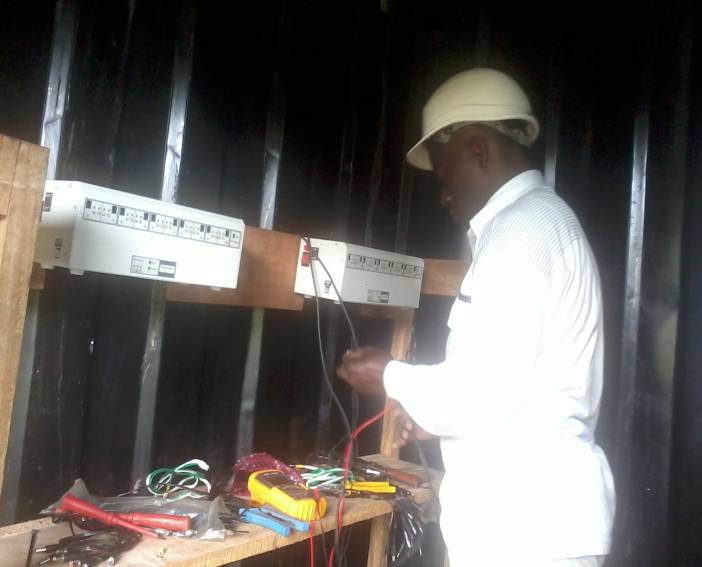 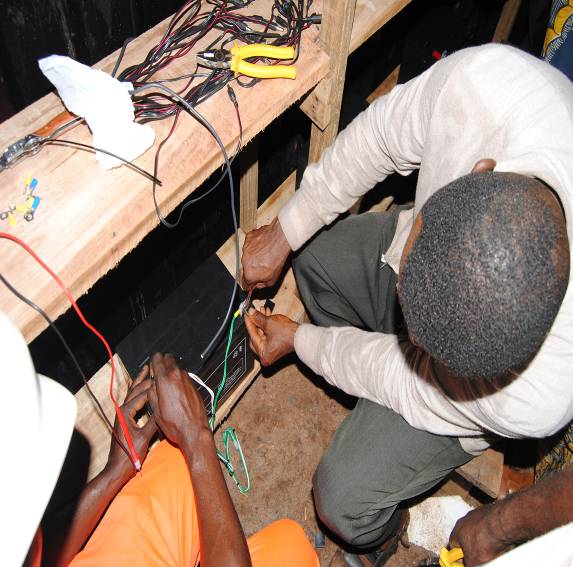 The indoor lighting kits consist of a 90LED lamp and backup battery with the battery bag used for carrying it to and fro the charging station. The trained youths were also divided into two groups with group assigned to install 20 indoor lighting kits. The tools required includes; a hammer, concrete nails for hanging the lamps and a meter rule for measuring the position of the battery and LED lamp as both are mounted on the wall at beneficiaries preferred location within the house. Bright light from the 90LED lamp during test run

Each LED lamp and battery was coded at the back with letter ‘U’ representing Uniaro community and then numbers from 1-40 (for example U20 for the twentieth beneficiary). After the home kits were installed for the 40 beneficiaries, the trainee’s next task was to make sure the backup batteries were well charged for at least two days. The forty battery packs were connected to the charging unit which has ten charging outlets inside the central charging station using connecting cables.

Three members of the community who were selected by elders of the community were trained for three days starting from on the 29th and ended on the 31st of August, 2012.They were trained as Local Energy Regulatory Committee (LERC) who will be responsible for the day to day running of the Central Solar Charging Station. LERC members were made to know that the Charging Station is their office and must do well to take good care of all the equipment installed in it. The male amongst them was assigned the duty of looking and opening of the charging station, clearing round the facility and making sure that the facility are kept dust free and also ensure that no tree or leaves shades the solar panels so as to guarantee maximum output.

The LERC members were told that the numbering of the backup batteries was done to help know who is in possession of a particular battery number and also  be able to find out who is under utilizing his/her battery in terms of number of charge per week. They were told that when beneficiaries comes with their batteries, the first thing they should do is to identify the number on the battery in the record book, collect the money for the charge, mark it on the record book  before connecting it to the battery charger.