According to the study 'Security & Safety in a Smart Energy World', presented by TÐV SÐD at the opening of the 2013 Hannover Messe, the energy and manufacturing sectors are underestimating the potential risks involved in modernising power grids; awareness of the vulnerability of smart grids is negligible and protective action is rare.

The energy transition is resulting in changes to the energy supply in both Germany and Europe. In addition to further expansion of renewable energy sources and the construction of 'electricity highways', smart capabilities are being added to medium and low-voltage networks to optimise the balance between generation and consumption and assure grid stability. To achieve this, individual grid members and grid operators must exchange the necessary information and a high level of automation must be established as a basis for this communication process and for grid management.

"Increased levels of energy feed-in from renewable sources and conversion of today's grids to smart grids represent challenges to the security of energy supply and grid stability", says Dr Kai Strübbe, Head of Embedded Systems at TÜV SÜD AG. Many modern production systems operate on the basis of time-critical processes and are thus sensitive to fluctuations in power supply or power outages, warns Strübbe. "In addition, smart grids bring the threat of malware or hacker attacks which could lay low production plants – or even our energy infrastructure as a whole."

TÜV SÜD's study 'Security & Safety in a Smart Energy World' examines the situation in the energy and manufacturing industries. Market research specialists Technomar GmbH were commissioned by TÜV SÜD to question a total of 255 CEOs and other decision-makers in energy companies, public utility companies and medium-sized manufacturers. One important finding of the study was that there is an acute need to heighten awareness of security issues.

Energy supply quality is an issue of supreme significance for all respondents of the study and is classified as a "high priority" by 89 per cent of major energy companies, 99 per cent of utilities and
89 per cent of manufacturers. All three market sectors confirmed that the highest damage to company performance is generally caused not by power outages, but by fluctuations in line frequency and line voltage. These disruptions cause the most problems for production operations, IT and other critical consumers such as process control systems or medical equipment. 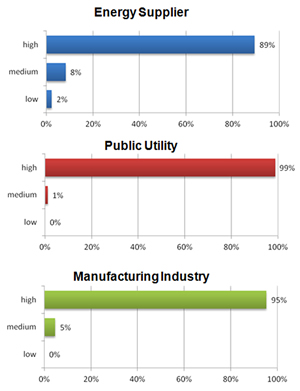 The majority of companies anticipate that the energy transition will have a moderate to high impact on the quality of energy supply – an expectation expressed by 85 per cent of respondents from major energy companies, 91 per cent from public utilities and 80 per cent of manufacturing operations. However, half of the decision-makers throughout all three market sectors are convinced that energy supply quality will not deteriorate as a result of the energy transition, and a not insignificant proportion – ranging from 20 per cent in utilities to 28 per cent in manufacturing companies – actually expect the number of power fluctuations and outages to decrease in future.

Most respondents also believe that the introduction of smart grids is unlikely to impact negatively on energy supply quality. This opinion is the most widespread in manufacturing companies and was expressed by 50 per cent of respondents in this category, demonstrating their high level of confidence in the energy companies and grid operators. "A striking feature was that one-quarter of decision-makers had no opinion one way or the other on this question", notes Dr Kai Strübbe. "This could indicate that the topic of smart grids has not yet universally come into focus or been the subject of adequate consideration."

Lack of protection against disruption and attacks

This confidence in energy supply quality has resulted in only half of the manufacturers surveyed taking adequate precautions against disruption to their energy supply. 32 per cent assessed their situation as "secure" and 17 per cent as "extremely secure". In line with this self-assessment, over half of manufacturing companies have no technical or organisational counter-measures in place for the event of power supply disruptions. And only a minority of the companies surveyed – 28 per cent of energy companies, 45 per cent of utilities and 22 per cent of manufacturers – plan to step up their security in the future. 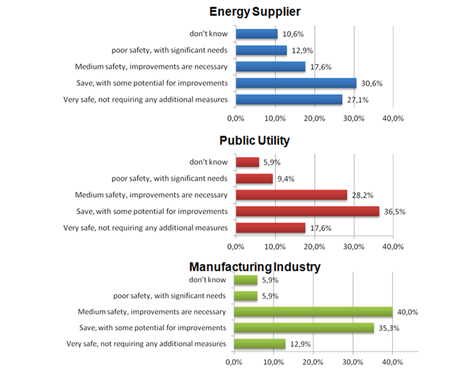 Awareness of security aspects must be improved

"We are particularly concerned at the responses concerning IT security", says Dr Kai Strübbe. "As increasing levels of smart functions and interoperability are added to smart grids, the risk of hostile attacks is growing in tandem." The TÜV SÜD expert warns that these attacks can be used not only to spy on details of corporate operations and energy consumers, but also to paralyse entire supply infrastructures.

In general, the results of the 'Security & Safety in a Smart Energy World' study show that market players are still insufficiently informed about the conversion of power grids to smart grids and the potential consequences of this process.

Dr Strübbe observes, "We see a dramatic contrast between the enormous significance of energy supply quality for all respondents and their failure to take precautions against potential disruptions."

But the conversion and upgrading of grids to smart grids will confront all market players – energy suppliers, energy consumers and grid operators – with completely new challenges. "The field of IT security and protection from malicious attacks is increasing in importance for smart grids", warns the TÜV SÜD expert. Adoption of an integrated approach and linking functional safety (Safety) with IT security (Security) will be essential if Germany's high standard of energy supply quality is to be guaranteed into the future.

Market research specialists Technomar GmbH interviewed a total of 255 CEOs and other decision-makers in large-scale energy companies, public utilities and manufacturing companies throughout Germany in January and February 2013 for the 'Security & Safety in a Smart Energy World' study. Respondents in the category of energy companies were selected to give a balance between smaller-scale and large-scale suppliers. In the category of public utilities, significantly more small and medium-sized operations were selected. The manufacturing category focused on small and medium-sized enterprises in sectors of industry ranging from mechanical engineering to the food, beverage and tobacco industries and from automotive manufacturers to ITC, electrical and electronics companies. 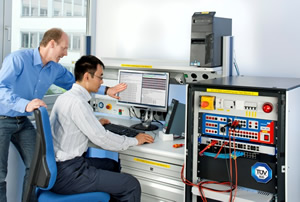 TÜV SÜD established its Embedded Systems unit two years ago to develop services aimed at the safety, security and reliability of embedded and networked systems in the fields of industrial production and energy supply. The experts at Embedded Systems provide services supporting the advancement of industrial automation into the 'Fourth Industrial Revolution' and the development of smart grids, smart building and smart metering – the components that will make up the smart energy world of tomorrow.

For more information on TÜV SÜD's services in this area, visit www.tuev-sued.de/smartgrid.