We need to do what has been done many times before in human history at key tipping points - embrace change and do what must be done - move strongly toward a renewable and sustainable energy future. It is, in my opinion, the fastest, best and the cheapest way to get there. 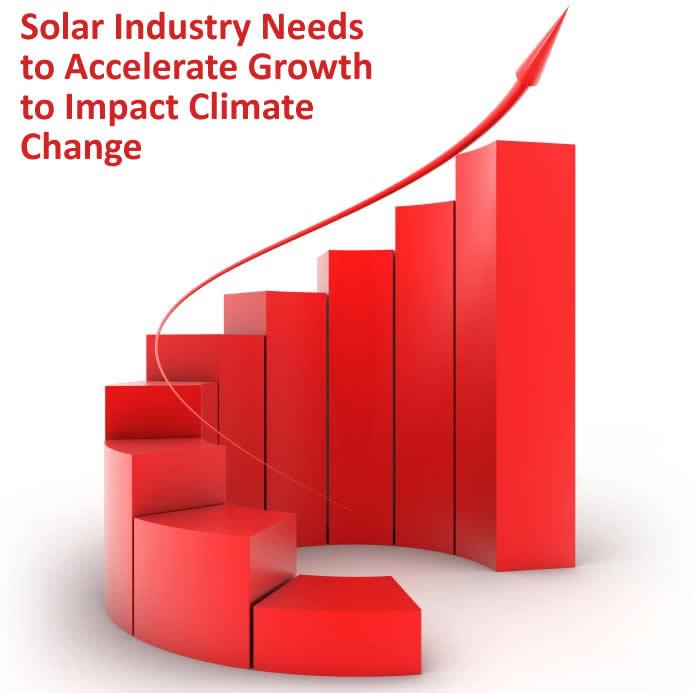 Solar is the only currently viable technology that has any chance of truly impacting Climate Change because it is available everywhere and truly abundant. Below is a slide by a friend of mine, Dr. Richard Perez clearly showing that solar’s annual potential is 10 fold greater than all the remaining fossil fuel reserves on earth – clearly the energy source of the future. 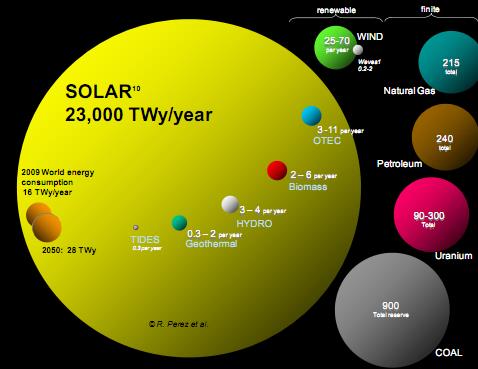 I truly believe that solar is the only technology that can be ramped up quickly enough to have a significant impact on Climate Change however the only way that solar can exploit this enormous potential is for the cost of solar to drop BELOW that of fossil fuels without the need for subsidies.

The only way that this is possible is with “disruptive” change and out of the box thinking – NOT the current linear, incremental thinking that is currently dropping the cost of solar – but not nearly fast enough to make a dramatic impact on climate change.

What do I mean by Innovative Truly Disruptive PV Technology?

In order for the world to reach a true “tipping point” we need a technology that is truly “disruptive”. We will never have a dramatic impact based upon current “incremental” changes. We need solar that is cheaper (with no subsidies) than fossil fuels and in order to do this it MUST possess ALL of the 3 attributes listed below.

Having only one or two of these attributes is a step in the right direction but it will not allow us to get to the low cost levels necessary to accelerate PV as a major worldwide energy source.

To date there are serious problems with each of these three necessary attributes:

It is just simple common sense that in order to be capable of manufacturing a low cost product we first need to have a low cost manufacturing facility. If we start out with an initial factory cost in the hundreds of millions of dollars or even billions of dollars it will be very difficult to produce a product that will eventually be cheaper than its fossil fuel rivals.

Since expensive semiconductor technology is the current standard in PV manufacturing it is difficult to get the CapEx down to the level necessary. The solar business is currently a low margin business and capital expenditures for production facilities (CapEx) will have to drop dramatically (currently in the $1.00 per watt range for thin film factories) in order for the industry to have the possibility of competitive prices to subsidized fossil fuels and also possess healthy profit margins.

With a much lower initial CapEx (less than .25 cents per watt for example, compared to the current $1.00 per watt) a number of very significant things would be possible:

The highest efficiency, without concentration, is currently averaging below 20% for a module and below 23% for an individual cell, this is not nearly high enough to sufficiently offset the Balance of System (BOS) costs (BOS is the other half of the cost for a completely installed PV system - roof racking, electrical work, installation labor etc.

Without a significant decrease in BOS costs, there is no way for a disruptive cost reduction to be possible. In addition the theoretical maximum for silicon is approximately 27% to 28% - as a result the industry is starting to bump up against the theoretical limits of the industries primary material.

In order to compete with other electricity generation (gas turbines and coal-fired plants) efficiencies in excess of 50% (without concentration) are needed.  Without this we will not be able to generate a high enough number of watt’s per square foot in relatively small areas to greatly expand the number of localized sources (e.g., residential and industrial applications) and create a robust and flexible distributed energy infrastructure.

Over the past decade the industry has made dramatic progress in dropping the cost of photovoltaic panels – from over $3.00 per watt to under $1.00 per watt. This is truly impressive and the industry is to be commended for this progress.

However, this has resulted in the current situation where intense competitive prices pressures and very large unsold inventories has priced most of the thin film technologies out of the market and all of the crystalline manufacturers (including the Chinese) losing significant amounts of money each and every quarter. The industry has gone from a low margin business to a negative margin business and this can, obvious, not continue indefinitely.

In order for the industry to reach the necessary price levels to accelerate the industry forward and give manufacturing companies a reasonable margin the manufacturing costs in the higher efficiency panel area need to be significantly below .50 cents per watt with the potential to go much lower.

Conclusion – A Paradigm Shift is needed

In order for ALL three of the technical attributes to be accomplished and for the industry to dramatically accelerate worldwide we need to think “outside the box” we need to push forward with unconventional thinking toward a fully distributed solar future.

In effect, we need to do what has been done many times before in human history at key tipping points – embrace change and do what must be done – move strongly toward a renewable and sustainable energy future. It is, in my opinion, the fastest, best and the cheapest way to get there.

Mr. Lynch has worked, for 36 years as a Wall Street security analyst, an independent security analyst and private investor in small emerging technology companies. He has been actively involved in following developments in the renewable energy sector since 1977 and is regarded as an expert in this field, with a focus in the area of solar electric generation – Photvoltaics.  He was the contributing editor for 17 years to the Photovoltaic Insider Report, an early publication in PV that was directed at industrial subscribers, such as major energy companies, utilities and governments around the world. He is currently a private investor and is focused on discovering renewable energy technologies that have the potential to be truly distruptive. He can be reached via e-mail at: SOLARJPL@aol.com. Please visit his website for the promotion of solar energy – www.sunseries.net.