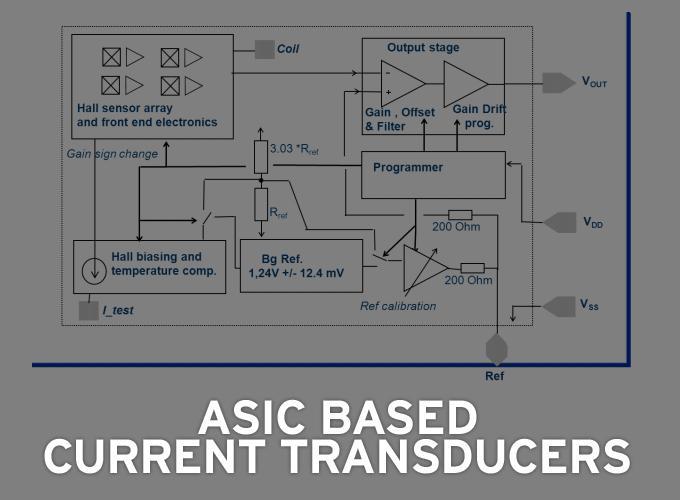 Current measurement is a standard requirement in power electronics applications. Many of these applications have a DC component to the current and/or require Galvanic isolation. This drives the measurement device to a current transducer as opposed to a current transformer. A current transducer will measure AC or DC current. Depending on the accuracy and bandwidth requirements, the current transducer selection will be an Open Loop type or Closed Loop type. Higher accuracy and higher bandwidth traditionally would require a Closed Loop. An Open Loop basic accuracy is typically 1% at 25°C, whereas a Closed Loop accuracy is more likely 0.5%-0.7% at 25°C. These accuracies are a combination of gain and linearity uncertainty. Offset error is typically zeroed out on power-up and is not considered here. A technique difficult to realize in discrete components is the spinning of the Hall Cells. By placing the Hall Cell on an ASIC, an array of hall cells can be implemented and averaged. This combined with spinning of the Hall Cells results in a much more accurate current measurement. The spinning refers to the rotation of the current source and measurement points on the individual hall cell being rotated through four positions. The multiple Hall Cells, combined with spinning, results in lower offset and gain errors.

Perhaps one of the biggest advantages to the ASIC based transducer is in power supply selection. Traditional current transducers typically require a bipolar power supply (+/-15V for example). This gives an output that has a magnitude and polarity. The polarity indicates direction of current flow. In the ASIC based transducer, the power supply can be a unipolar 5V or even 3.3V. A unipolar transducer preserves the current direction information through the use of a reference voltage, typically 2.5V in a 5V transducer. This reference voltage indicates no current (0A). The reference voltage (Vref) is generated internally by the ASIC. The output voltage proportionally representing the current measured adds or subtracts from the reference depending on the direction of the current. Due to the ASIC output amplifier not being a rail-to-rail type, the output limits are 0.5V and 4.5V when power is supplied in 5 Volt unipolar. Depending on the sensitivity programmed into the ASIC, the range of output voltage from 2.5V to a respective limit might represent three times the nominal rated current of the transducer. This allows for measurement of the current for control and a 300% measurement for protection schemes if needed.

There is an uncertainty associated with the reference voltage. In most ASIC based transducers, the Vref is externalized on a pin for reference. The Vref is both an input and an output. The output function can be incorporated as an input into a differential amplifier along with the output voltage of the transducer (Vout). Subtracting the Vref from the Vout removes the Vref error from the measurement. Or the Vref and Vout can be input into two separate Analog-to-Digital inputs and subtracted in software. The Vref can also be an input with an external voltage applied to the Vref pin. This is useful in two ways, either as a more accurate source for the Vref than the one generated internally by the ASIC, or as a way to shift the Vref to another value. The Vref can be pulled higher or lower by applying the desired voltage to the Vref pin. This can open the range up in one direction of current flow. This is useful in unidirectional current flow applications where a broader range with a higher volts-per-amp output is desired.

The ASIC is a more reliable device than a transducer constructed with discrete components. An ASIC based transducer will operate over a broader temperature range than a discrete components device. This increased reliability and broader operating temperature range has led to the development of ASIC based current transducers for the automotive and industrial markets. Almost every car manufactured today has, as a minimum, battery current monitoring. Hybrid and electric cars will have more than a dozen current transducers in each vehicle. Automotive quality requirements have driven transducer development to ASIC based solutions. Unipolar power supplies, ratiometric capability, light weight (no potting) and rough environment reliability are some of the characteristics of automotive type transducers. The automotive families of transducers have found uses in other fields such as offroad vehicles and industrial equipment.

ASIC based transducers allow for additional features to be added. The latest ASIC generation allowed many more programmability options such as gain, response time, Over Current Detection (OCD) level, reference voltage level, low power mode and standby mode. Self-test features are possible. Dedicated output pins such as for OCD are possible. Offset and gain errors can be tested over a range of temperatures during manufacturing and compensation can then be programmed in. Filtering can be programmed with impact on bandwidth and improved response times.

Of the programmable features perhaps the largest impact is from the OCD. Implemented as a pin from an internal open collector configuration, the OCD will change states during an overcurrent episode. The OCD threshold is programmable and may be outside the measuring range of the transducer. Thus the measuring range can be focused on the operating current range and the overload function will operate separately. The transducer measuring range might have a programmable filter set to 3.5μs response time for control purposes. The OCD will still respond in 2μs. Control is filtered with a higher sensitivity than would be otherwise possible if the protection function was included in the measured range. An OCD pin eliminates the need for a crowbar/comparator circuit. The overcurrent threshold could be 5 times the nominal current rating of the transducer.

About LEM
LEM is a market leader in providing innovative and high quality solutions for measuring electrical parameters. Its core products – current and voltage transducers - are used in a broad range of applications in industrial, traction, energy and automotive markets. LEM’s strategy is to exploit the intrinsic strengths of its core business, and develop opportunities in new markets with new applications. Together with production plants in Geneva (Switzerland), Machida (Japan), Beijing, (China) and our regional sales offices, LEM offers a seamless worldwide service. LEM has been listed on the SIX Swiss Exchange since 1986. The company’s ticker symbol is LEHN.