Worldwide PV installations are set to rise by double digits in 2014, solar manufacturing capital spending is recovering, module prices are stabilizing and emerging markets are on the rise. 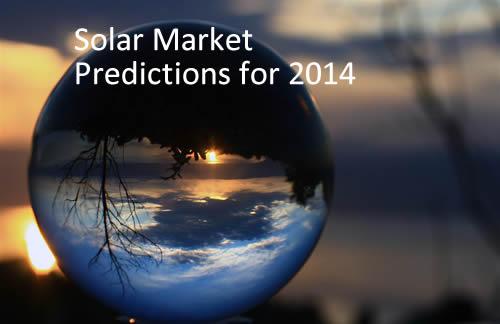 This is an IHS News Flash covering the top predictions for the global photovoltaic (PV) market in 2014, from a new white paper issued by the IHS Solar service at information and analytics provider IHS (NYSE: IHS).

“After two years of a punishing downturn, the global solar industry is on the rebound,” said Ash Sharma, senior research director for solar at IHS. “Worldwide PV installations are set to rise by double digits in 2014, solar manufacturing capital spending is recovering, module prices are stabilizing and emerging markets are on the rise. However, challenges remain, including changes in government incentives and policy, an on-going backlash to the rapid rise of renewables and razor-thin margins throughout the solar value chain.”

Below are the top predictions for 2014 from the IHS solar research team.

Despite multiple risks, IHS remains bullish about the development of the PV market in 2014 and firmly believes that global installations will be in the range of 40 to 45 gigawatts (GW), based on a bottom-up analysis of more than 100 countries. Against a backdrop of reduced support and incentives in major European markets, a still-fragile global economy and major trade disputes rocking the industry, the projected level for next year is a remarkable achievement for an industry that just four years ago installed less than half this amount. The attached figure presents the IHS forecast of PV installations in 2014 by country.

With the cost of solar energy plunging, demand for PV energy storage systems (PVESS) is booming, with installations set to quadruple in 2014. Worldwide installations of PVESS in 2014 will amount to 753 megawatts (MW), up from 192 MW in 2013. Strong growth will be generated by all three major segments of the market—i.e., residential, commercial and utility-scale PVESS. The largest growth will be in the commercial sector, driven by demand for intelligent electricity-consumption systems in buildings.

Persisting manufacturing overcapacity for PV modules will result in a 10 percent decline in average selling prices (ASPs) in 2014, prohibiting any further increase in profit margins for suppliers during the year.

2014 to Trigger Technology Upgrades and Return of Capital Spending

IHS predicts global capital spending in 2014 by producers of PV ingots, wafers, cells, modules and polysilicon will rise by a robust 42 percent to reach $3.3 billion. With demand shifting away from the developed solar regions of the United States, the European Union and China, PV manufacturers are gaining interest in running operations in emerging markets, a phenomenon expected to result in new factory openings and boosting local capital spending in areas such as the Middle East, South America and parts of Africa.

In 2014 Latin America will surpass a new milestone in the deployment of PV. IHS forecasts that installations in the region will soar to 1.4 GW in 2014, up from 300 MW in 2013. The majority of additions will take place in Chile and Mexico, countries without any conventional subsidies for PV.

In mid-2013, net-energy metering (NEM) became one of the most contentious issues in the U.S. solar PV industry. However, while states including Arizona, Colorado and California are re-evaluating their NEM policies, the impact of any potential changes on the U.S. distributed PV industry is expected to be negligible in 2014.

The rise of solar markets in Japan and China is spurring the rapid growth of the PV inverter business in those countries, boosting market share for domestic suppliers in 2013. Four of the world’s Top 10 inverter suppliers during the first nine months of 2013 were from China or Japan when ranked on a revenue basis, up from two in 2012. As Chinese and Japanese suppliers start to expand their international presence, IHS predicts that those that survive the intense competition will be well-placed to increase their global market share.

In November, China’s National Energy Administration (NEA)—a subsidiary of the National Development and Reform Commission (NDRC)—announced huge plans for 12 GW of PV projects in 2014. These consist of 8 GW of distributed PV and 4 GW of ground-mount systems. While the announcement is hugely encouraging for both the Chinese and global PV industry, IHS firmly believes that such an ambitious target for distributed PV installations is not achievable, and the reality is that actual totals will fall far short of this goal.

PV Module Prices Will Continue to Decline Over the Long Term

One solar industry thought leader is positing the theory that PV module prices should stabilize or even increase during the period from 2013 to 2017. IHS begs to disagree. In its own investigation of market pricing trends and price correlation of innovation and learning effects, IHS has concluded that PV module prices will not remain flat in the coming years. Rather, IHS believes that cost and price will decline by more than 40 percent in 2020 compared to 2013.

Unsubsidized PV Market to Take Off in 2014

High electricity prices and the falling cost of PV will allow 700 MW of unsubsidized PV to be developed worldwide in 2014, especially in regions with high irradiation and intense electricity demand.

Historically the PV market has been driven exclusively by government subsidies, including feed-in tariffs (FITs), tax credits and tender schemes. In recent years, these subsidies have been scaled back as PV installations have grown rapidly, because lower system cost has made the original schemes very attractive and also costly to support for 20 years or more.

IHS (NYSE: IHS) is the leading source of information, insight and analytics in critical areas that shape today's business landscape. Businesses and governments in more than 165 countries around the globe rely on the comprehensive content, expert independent analysis and flexible delivery methods of IHS to make high-impact decisions and develop strategies with speed and confidence. IHS has been in business since 1959 and became a publicly traded company on the New York Stock Exchange in 2005. Headquartered in Englewood, Colorado, USA, IHS is committed to sustainable, profitable growth and employs approximately 8,000 people in 31 countries around the world.