What we can expect to see is a gradual transition of solar from an alternative energy to a truly cost competitive source of energy that helps counteract rising electricity rates and fuel costs. 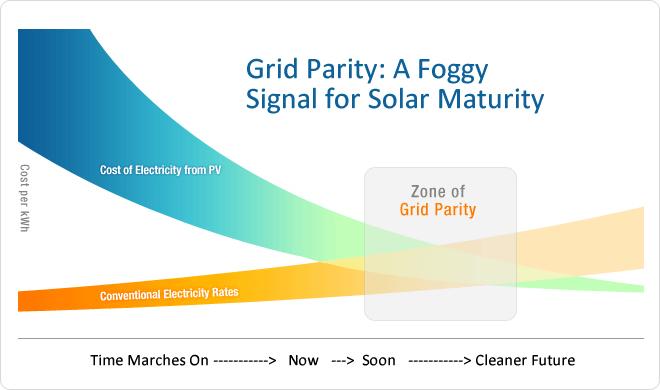 The concept of grid parity is the following:  the point at which the cost of producing electricity from an energy source is less than or equal to the price of purchasing power from the grid. In theory, when solar energy reaches grid parity it will be cost-competitive with conventional fuels, making it viable for widespread development without subsidies or government support. However, the point at which solar grid parity will take place is somewhat less straightforward than you might think.

Across the board, we get closer and closer to reaching grid parity for solar as fuel prices continue to increase and upfront costs for solar continue to decrease. Some are particularly optimistic: a report by Navigant Research estimates solar PV will be cost-competitive with retail electricity prices without subsidies in a “significant portion of the world” by 2020. The price of solar PV panels fell from $4 per watt in 2008, to less than $1 per watt in some of today’s markets. This dramatic price decline in the past several years is due mainly to an increase in production capacity and government incentives, and has made solar PV appealing to developing nations and an entire new class of homeowners and businesses.

Nevertheless, it can be difficult to define the notion of parity for the electric grid. One of the main issues is the assumption that grid parity occurs at a single moment in time. In reality, the number of variables involved – insolation levels, subsidies, grid prices, financing structures, among others – vary widely on a geographic level. This makes it likely that the convergence between solar energy costs and grid prices could be decades apart depending on which region of the world we’re looking at. In 2012, for example, unsubsidized solar power became cost competitive with fossil fuels in India, Hawaii, Italy and Spain. Other regions of the world, however, will take more time to reach this level of success with solar.

The levelized cost of energy (LCOE) of solar is often looked at as the sole variable in determining when grid parity will occur. The levelized cost is the price as which electricity has to be generated from a solar system to break even over the lifetime of the project. Because solar PV does not use fuel and is largely maintenance free, the LCOE is determined mostly by the capital cost of the system. Although a low LCOE is important for reaching solar grid parity, there are other considerations that need to be accounted for. High upfront costs and transmission bottlenecks are two examples that can prevent the deployment of solar regardless of the LCOE of a system.

The tipping point for solar will vary by market segment as well. For residential and commercial retail customers the main barriers to grid parity will be access to low-cost financing and installers’ ability to reduce upfront costs. Whether or not the system is connected to the grid is also relevant. The LCOE of a grid-connected solar system will be competing against the retail price of grid power, which includes transmission fees, taxes, etc. Off-grid applications, on the other hand, may be competing against the cost of erecting power lines or alternative power generators. 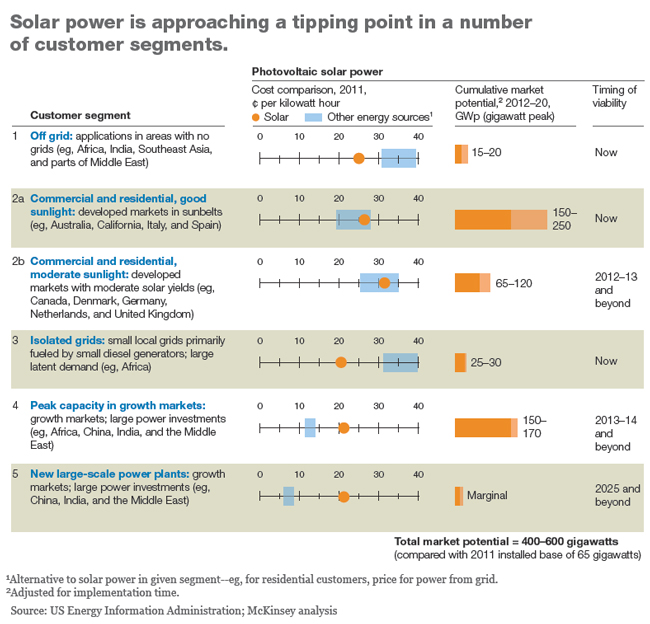 Conversely, the tipping point of new, large-scale solar power plants will be largely determined by their cost comparison to new-coal, natural-gas or nuclear plants. The number of utility-scale solar plants has boomed in the past couple of years. According to the recent SEIA/GTM research report, the utility market saw consistent, strong installations through Q3 and this segment will remain the largest in terms of installations through at least 2016.

Solar grid parity is not an event in time that you can simply mark on your calendar. Quoting Shyam Mehta from Greentech Media, “The long-term solar deployment curve will probably have more twists in it than a Christopher Nolan film.” As a concept, however, grid parity will be a useful indication to the maturity of a particular segment of the solar market. What we can expect to see is a gradual transition of solar from an alternative energy to a truly cost competitive source of energy that helps counteract rising electricity rates and fuel costs.

About Katherine Portilla, Circular Energy
Katherine is a communications and marketing specialist, with a bachelor's degree in Mechanical Engineering from Imperial College London and a master's degree in Science Journalism from City Univeristy. Katherine works in Marketing at Circular Energy, Texas’ leading full-service residential and commercial solar company.