As the world looks to cleaner sources of energy and more reliable and resilient power, fuel cells are gaining international attention as a key piece of the puzzle.  Fuel cells offer multiple benefits – both environmental and economic.  They also complement other technologies; fuel cells can run on traditional fossil fuels or partner with batteries or renewable solar and wind installations.  They can operate in tandem or independent of the grid and are also proving themselves in smart grid and energy storage applications.

The United States (U.S.) is a world leader in fuel cell technology, with major fuel cell stack and system manufacturers, fueling companies and key component suppliers headquartered across the country.  The U.S. is home to cutting-edge university research and partnerships, numerous patents, and the greatest number of large-scale fuel cell installations, which range from hundreds of kilowatts to multi-megawatts (MW) of power.  Fuel cell technology is also taking off as a power source for forklifts and fuel cell backup systems, and U.S. businesses provide a major market for clean and reliable fuel cell technology at crucial data centers and company headquarters.

Unlike other countries such as Japan, Korea and Germany, which have national fuel cell and hydrogen strategies, plans  and roadmaps, it is individual states across the U.S. that are stepping up to set supportive policies, provide funding and encourage both regional and international collaboration, which is helping to deploy fuel cell technology, continue industry momentum and keep the U.S. competitive.

A new report, State of the States: Fuel Cells in America 2013, partially funded by the U.S. Department of Energy’s (DOE) Fuel Cell Technologies Office and written by Fuel Cells 2000, takes a closer look at state-level activity and provides details on newly enacted policies and funding, recent and planned fuel cell and hydrogen fueling installations, vehicle deployment, university and military activity and DOE-sponsored research and development.  This report, which is the fourth in a series, also spotlights international investment and expansion of foreign companies into the U.S.  Since several of the leading fuel cell manufacturers are located in the U.S., export, investment and partnership opportunities are growing, helping advance the industry around the world, while generating jobs here at home. 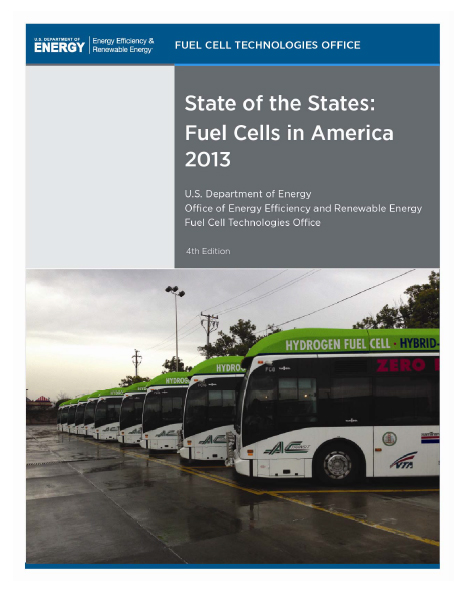 The report finds that in the year since the 2012 edition, there has been:

Top of the Pack

The report identifies the “Top 5 Fuel Cell States” – California, Connecticut, New York, Ohio, and South Carolina.  These states have been chosen before and each state for a different reason, yet  they continue to lead by example by enacting policies that attract business and encourage fuel cell installations, which in turn helps to reduce emissions, improve energy efficiency, and create new job and business opportunities in not only their state, but the U.S. as a whole.

Once again, California leads both the country and the world in deployments of the number of large-scale stationary fuel cell installations.  Since our last report, there have been tens of MWs sold or installed in California, including from customers such as AT&T, Nokia, Verizon and Williams-Sonoma.

Connecticut gives California a run for its money and could also rival some countries with its fuel cell activities.  The state is home several of the industry’s major manufacturers, and a state report, New Comprehensive Energy Strategy indicates that fuel cells are an important element of the state’s renewable resources strategy.  In fact, the report notes that the fuel cell industry contributed $267 million to Connecticut’s gross state product and more than $22 million in state and local tax revenue, while supporting about 1,000 jobs.  Connecticut now also operates the second largest fuel cell power park (the largest is in Korea), a 14.9 MW fuel cell power generation facility in Bridgeport that delivers power to the energy grid.

Other states now boasting fuel cell installations include Pennsylvania, with a 600-kW fuel cell installed at the main office of URBN (formerly Urban Outfitters) in Philadelphia and Wyoming, where a 300-kW fuel cell will power a Microsoft data center using renewable biogas generated at the local wastewater treatment plant.  The report goes into more detail about these and others.

States are also preparing for the commercial launch of fuel cell vehicles.  In November 2013, the governors of California, Connecticut, Massachusetts, Maryland, New York, Oregon, Rhode Island and Vermont signed a Memorandum of Understanding (MoU) agreeing to coordinate actions to support and ensure the successful implementation of their state’s Zero-Emission Vehicle (ZEV) programs that support battery and fuel cell vehicles (collective target of at least 3.3 million zero emission vehicles on the road by 2025) and agree to work together to establish a fueling infrastructure that will adequately support this number of vehicles.

This was a welcome announcement, as several automakers are targeting 2015 as the commercial target date to launch small fleets of fuel cell vehicles.  Hyundai and Toyota are aiming to start even earlier, putting vehicles on the road in 2014.  Initially, fuel cell vehicles will be available only where there is a hydrogen refueling infrastructure, including Japan, Germany and Scandinavia.  So far, since California is the only state with enough public hydrogen fueling stations, as well as supportive policies and funding, and a plan for more hydrogen stations, it is the only state to far that is a viable option for a consumer fuel cell vehicle market.  In July 2013, the California Energy Commission (CEC) awarded more than $18 million to build several new and upgrade some existing hydrogen stations in the state.  With this ZEV MOU, automakers can plan to expand up the West Coast to Oregon as well as into the Northeast once the infrastructure and support is in place.

The ZEV MOU was announced after the report was finalized, but other transportation projects are covered in the report – fuel cell cars, buses, trucks, forklifts and other specialty vehicles, including fuel cell-powered baggage tow tractors and refrigerated transport units, both of which are the focus of DOE-funded demonstration projects.   For each vehicle deployment, hydrogen fueling dispensers, mobile refuelers or stations are put in place, helping reduce emissions from gasoline and other fossil fuels in the process and building the essential infrastructure to move to a more secure and cleaner energy future.

To find out more about what is happening in your state and around the country, check out the report at http://www1.eere.energy.gov/hydrogenandfuelcells/pdfs/state_of_the_states_2013.pdf.  To learn more about fuel cells in general, please visit www.fuelcells.org.