Nearly 60% of the natural gas capacity added in 2013 was located in California. The state is facing resource adequacy concerns as well as the need for more flexible generation resources to help complement more variable-output renewable resources, particularly solar, being added to the system.

Solar. Solar photovoltaic (PV) added 2,193 MW of capacity in 2013, continuing the trend of the past few years of strong growth, helped in part by falling technology costs as well as aggressive state renewable portfolio standards (RPS) and continued federal investment tax credits. Nearly 75% of the capacity added was located in California, followed by roughly 10% in Arizona. (Note: these figures do not include distributed capacity under 1 MW. Distributed solar PV capacity additions also grew in 2013, with industry reports estimating nonutility additions of 1,900 MW. Most of this capacity was also located in California.)

After many years of little activity, the solar thermal industry completed several large-scale solar thermal plants in 2013 located in Arizona and California totaling 766 MW of capacity, more than doubling the total solar thermal capacity in the United States. A few more projects are expected to be completed in 2014-16; however, several other announced projectes have since been cancelled or suspended because of a number of challenges such as environmental impacts on desert wildlife and water resources, cost-competitiveness, and delays in transmission development.

Coal. Two coal plants, both delayed projects that were originally scheduled to be completed in 2011-12, accounted for all of the coal capacity added in 2013. The Sandy Creek Energy Station in Texas is a 937 MW conventional steam coal plant that was badly damaged during testing in 2011 and required major repairs before becoming operational. The Edwardsport plant in Indiana is a 571 MW integrated gasification combined-cycle (IGCC) plant, one of only two of the many proposed IGCC projects that actually advanced into construction as natural gas prices dropped (the Kemper County IGCC project in Mississippi is still under construction).

Wind. Wind capacity additions (1,032 MW) dropped sharply in 2013 to less than one-tenth of the capacity added in 2012 (12,885 MW). This was a widely expected result of the rush to complete wind projects in 2012 to qualify for the federal production tax credit. Unlike previous versions of the tax credit, the one-year extension for 2013 allowed developers to claim the tax credit for projects that began construction in 2013 even if the project will be completed in a later year. Consequently, developers were not as pressured to complete wind projects by the end of 2013. At this time, there have not been any subsequent extensions of the tax credit. More than 90% of the wind generation capacity additions in 2013 were located in five states: California, Kansas, Michigan, Texas, and New York (see graph at end of article). 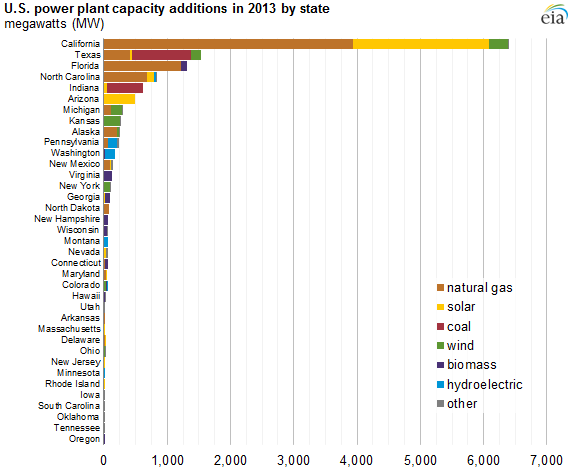 California. California added 6,395 MW of capacity, 47% of all capacity added in 2013. The state has added a large amount of new capacity in an effort to deal with a number of problems challenging the state's resource adequacy and grid reliability, including: 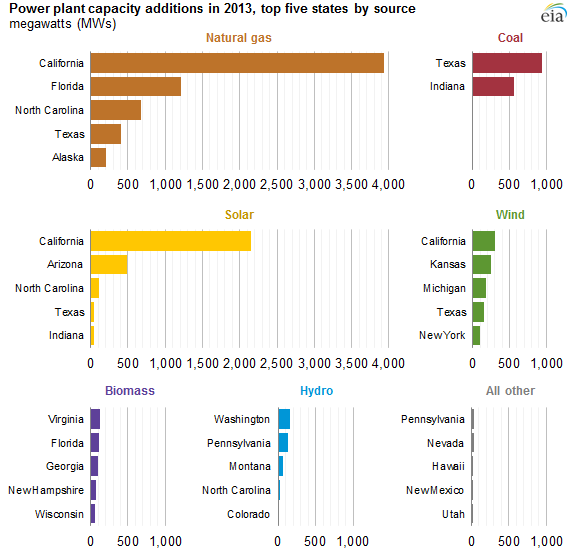 About Today in Energy

Today in Energy! — topical, timely, short articles with energy news and information you can understand and use. Every business day we provide bite-sized pieces of information you can use in business, government, schools, and in your personal life. Our experts explain topical data, reports, issues, and trends to build your understanding of energy issues.