The Business Case for Fuel Cells 2014: Powering the Bottom Line for Business and Communities

Did you know that…?

These are some of the recent trends reported in, “The Business Case for Fuel Cells 2014 – Powering the Bottom Line for Businesses and Communities,” a new report issued by the Breakthrough Technologies Institute.  The report, the fifth in a series, highlights the growing list of fuel cell customers who are saving money on fuel and labor costs, lowering emissions, and yielding substantial energy savings through increased efficiency and reliability. 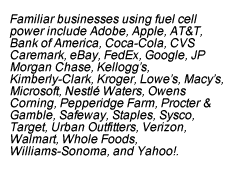 Dozens of Fortune 500 companies utilize fuel cells to power their corporate buildings and data centers, to provide backup power to telecom towers, and to run material handling equipment used in warehouse operations.  Many have become repeat customers, purchasing additional, and in many cases, larger, fuel cell systems for their facilities, or are expanding into new uses for fuel cells. 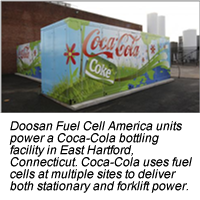 Both corporations and municipalities increasingly recognize that fuel cells are clean and resilient technology that can:

Resilience and Reliability.  With increasing reliance on personal electronics and technology for banking, communications, teleworking and other daily transactions, staying connected is more important to people these days.  Data centers, banks, hospitals, grocery stores, telecom companies and government agencies all rely on constant and high quality power to maintain crucial operations.  In many areas, the aging electrical grid does not meet this requirement and high power demand is causing a strain, especially at peak times.

Extreme weather, such as hurricanes, snow storms and even excessive heat, are also major factors in widespread power outages around the country.  These blackouts can be very costly, so reliability and resiliency has become a top priority for businesses and municipalities.

Fuel cells can generate electricity independent of the grid, providing crucial backup power to a grid-connected building and eliminating the fear of losing power.  Fuel cells can also be configured to be a building’s primary, reliable power source, replacing the grid entirely.  With the ability to generate power 24/7, fuel cells are an ideal clean power generation technology to for the development of local microgrids (co-location of power generation and load) capable of operating in island mode when grid power goes down.

Fuel cells are rugged and have proven themselves through several recent storms, providing reliable primary power and emergency backup power to customers – ensuring seamless critical communications and provision of services when the electric grid was vulnerable or out of commission.  Some states recognize the fuel cell value proposition and offer grant funding to install the technology at critical facilities to deliver important services to the public during emergencies.[1]

Increased Efficiency and Productivity.  Fuel cells are inherently more efficient than combustion systems.  Fuel cell systems today can achieve around 50% fuel-to-electricity efficiency using hydrocarbon fuels such as natural gas.  Compared to a natural gas-fired gas turbine, which is about 25% efficient, and combined cycle, internal combustion, and steam generators, which are about 33% efficient,  using natural gas in a fuel cell means more power for less money.  If hydrogen is used as a fuel, efficiencies of nearly 60% have been demonstrated.

Fuel cells produce heat as a by-product, so when they are sited near the point of energy use, heat can be captured for heating (called combined heat and power, or CHP), or even cooling, resulting in system efficiencies of 85% or greater and allowing users to reduce or eliminate the need for boilers or water heaters and their associated costs and emissions.[3]

When used for off-grid power, such as backup power to cell towers or primary power for remote monitoring equipment, fuel cells can operate on hydrogen or methanol for days to weeks at a time, reducing trips to deliver fuel to diesel or propane generators or to replace spent batteries.

Fuel cell-powered forklifts operating at a 24/7 distribution center reduce operational costs and increase productivity through longer run times and shorter refueling time.  Fuel cells can operate for an entire 6 to 8 hour shift on a single tank of hydrogen and deliver constant power to forklifts with no voltage sag, improving the efficiency of operations.  Forklifts can also be easily and quickly refueled directly by the vehicle’s operator, so staff required for battery swaps and recharging activity can be redeployed to other duties in the warehouse.  With fuel cells, there is also no more need for handling and disposing of toxic lead and acid from batteries. 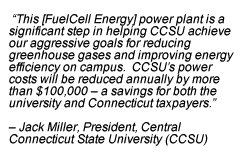 Cost Savings.  Customers in states with high commercial or industrial electricity prices are finding that they can generate electricity onsite with a fuel cell that is cost competitive with, and in some cases cheaper than, grid power.  Fuel cell power can also cost less where utilities charge extra for electricity at times of peak demand.

Bloom Energy, for example, reports that its fuel cell systems generate electricity at 8-10 cents/kilowatt-hour (kWh).  FuelCell Energy reports that the levelized cost of energy for their systems is 14-15 cents/kWh without any subsidies (depending on the cost of natural gas). With incentives[4]  FuelCell Energy’s systems generate power at 9-11 cents/kWh.

While fuel cells can be purchased outright, many recent fuel cell purchases have been via a different funding mechanism known as a power purchase agreement (PPA).  With a PPA, the customer does not own the fuel cell, but instead purchases power (and sometimes useful heat) generated by the fuel cell at a pre-defined price for up to a 20-year period.  This provides the customer with budget certainty and protection against fluctuating energy prices.

Versatility and Emissions Savings.  Fuel cells can be powered by a range of fuels.  A fuel cell that operates using hydrogen fuel, mainly for applications such as cellular phone towers or material handling equipment, generates power without any on-site greenhouse gas (GHG) or other polluting emissions.  Some fuel cells can also be powered by byproduct gases – such as biogas from wastewater treatment, landfills, or agricultural processing – turning a polluting waste gas into a useful fuel. 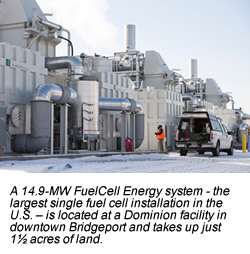 Fuel cells are also used by customers to generate power in conjunction with other conventional and renewable energy sources, such as batteries, gas turbines, solar photovoltaics, and wind power.

In addition, fuel cells take up much less space than other technologies offering a similar power output.  The fuel cell’s smaller footprint and lower weight means that it can be situated not only outside, but also inside buildings or on roofs, offering maximum flexibility.

Water Savings. With the ongoing drought in California and some western and southern states, coupled with an increasing demand from a growing population, water has become a precious resource.  According to Sandia National Laboratories, the electricity industry is the second largest user of water in the U.S.  Coal currently accounts for 52% of U.S. electricity generation, and each kWh generated from coal requires withdrawal of 25 gallons of water.  This adds up fast.  The average U.S. coal plant uses 1.1 million gallons per 200 kW annually, and efficient combined cycle natural gas plants use 416,100 gallons per 200 kW annually.

Fuel cells, however, help to conserve water while generating energy.  Most fuel cells require less than a gallon of water per MWh.  Bloom Energy’s fuel cells don’t require any water beyond a 240-gallon injection at start-up.  Doosan Fuel Cell America states that each of its Model 400 (400-kW fuel cell system) saves about 1.6 million gallons of water per year compared to the U.S. electric grid. 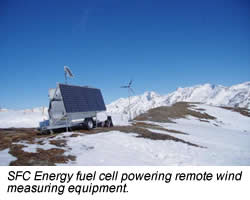 Power When You Need It. Because fuel cells do not have to be connected to the electrical grid, they are a form of distributed generation (power generated at the point of use) that can allow companies and municipalities to move away from reliance on high voltage central power generation, which is vulnerable to power outages and natural disasters.

Fuel cells are rugged – they can be sited in harsh terrain, extreme climates, and in rural areas that lack power lines to generate power for buildings, communication and mission critical equipment.  Today, fuel cells are helping cell phone, microwave and radio network providers extend their network into remote areas without costly grid extensions or redesigns.  Fuel cells are also being trialed by military forces in the field, providing portable electronic soldier power.

Because they need little maintenance, can be remotely monitored and are more efficient than diesel generators or internal combustion engines, fuel cells are also finding a niche in energy exploration markets – powering monitoring equipment for wind measurement equipment (LIDAR and SODAR) as well as chemical injection pumps at oil and natural gas well head sites.  The fuel cell’s higher efficiency adds up to savings.  One fuel cell manufacturer serving this market predicts cost savings on propane to equal $2,790 per site, per year.

Walmart has installed fuel cells at 35 retail sites (and counting) and soon will boast the world’s largest collective fleet of fuel cell-powered forklifts.

Verizon wants to reduce its carbon intensity by 50% by 2020 and aims to earn LEED status at 225 stores by the end of 2015.  As a company that invested early in fuel cell trials and installations, Verizon has already invested $100 million in the deployment of 25 MW of fuel cell and solar power.

Food product distributor Sysco has deployed over 700 fuel cell forklifts at seven U.S. distribution centers and proudly states that, “fewer acid batteries are making their way to landfills due to our conversion to hydrogen fuel cell-powered equipment at seven of our operating companies.”

Alameda County, California, which has committed to reducing GHG emissions by 80% by 2050, installed a 1-MW fuel cell at the Santa Rita Jail in 2006. The fuel cell saves county taxpayers more than $260,000 per year while offsetting 3,200 tons of GHG emissions annually.

For all the reasons mentioned, the list of repeat fuel cell customers is growing, and not just longer, but wider, as companies purchase fuel cells for different applications such as MHE and power generation.  Since our last report, there have been several major announcements and new location details from Fortune 500 companies such as Walmart, AT&T and Verizon, all ramping up their investments in fuel cells.

A number of these companies started small, testing fuel cells at a few sites (often with the assistance of the DOE, which is helping to move the fuel cell and other renewable energy industries toward greater commercialization).  Once fuel cells proved their mettle, these companies came back for more – purchasing hundreds of additional fuel cells and many megawatts of fuel cell power.

[1] These states include Connecticut (grants for developing microgrids) and New Jersey (grants and loans from the state’s new Energy Resilience Bank).

[2] Utilities using fuel cells to generate grid power include Delmarva Power and Dominion (who sells the power output to Connecticut Light and Power).  In addition, NRG Energy is marketing fuel cell power plants to its customers and Exelon Corporation is providing equity financing for 21 MW of fuel cell projects at 75 commercial facilities for two of its customers.

[4] A federal tax credit of $3,000/kW is available through the end of 2016.  Several states also offer additional financial incentives for installing fuel cells.