In the United States, more than half of the energy we burn each year gets lost as heat instead of being put to use with most of the energy going out the exhaust pipe of a car or out the smokestack of a power plant. 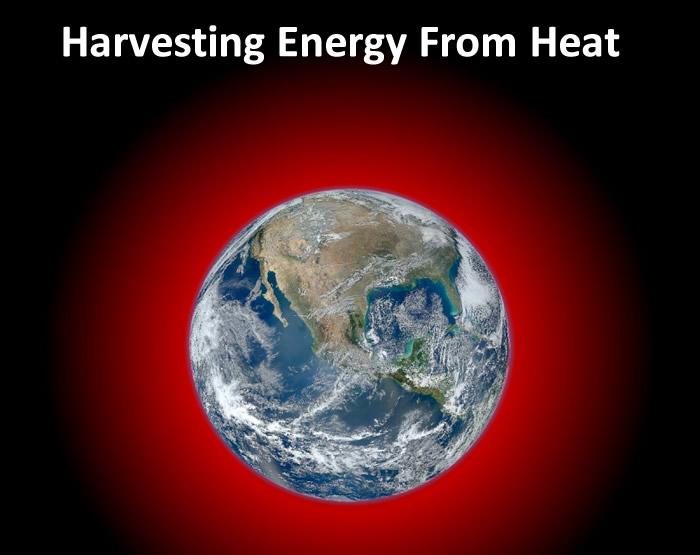 A sustainable supply of energy is one of the great challenges facing mankind. Therefore significant funding and promotion of R&D is being implemented to harvest energy through heat generation, use, and efficiency. For commercial development of harvesting energy through heat, a measurement standard is needed to ensure that the efficiency can be measured, defined and compared.

The energy basis to accomplish this task are the largely untapped sources of ambient energy resulting from human activity and environmental energy, which flows in the form of waste heat, movement and vibration — for example heat transfer from automotive exhaust gases used to recharge the battery; and heat and movement lost from portable electronics and mobile communications.

Engineers have made progress toward dealing with one of the leading problems in energy use around the world today, which is the waste of the energy produced by cars, factories and power plants. New technology is being developed to capture and use the low-to-medium grade waste heat that's now going out the exhaust pipe of millions of automobiles, diesel generators, or being wasted by factories and electrical utilities.

Such technology has potential cost savings, and improved energy efficiency. New systems are being perfected that should be able to use much of that waste heat either in cooling or the production of electricity. More than half of the heat generated by industrial activities is now wasted. Even advanced electrical power plants only convert about 40 percent of the energy produced into electricity. Automobiles are even worse as they operate around 25 - 40% efficiency. The vehicle's radiator is designed to dissipate wasted heat.

Continued research will be needed, but it should be possible for a system to be used in hybrid automotive technology, which will take waste heat from the gasoline engine and use it for air conditioning and to help recharge the battery. There are many sources of wasted heat in cars, including the radiator and the engine; but the main source is the exhaust. Most cars already recirculate exhaust in an EGR loop. This provides the prospect to trap this otherwise wasted heat and use thermoelectric devices to convert it into electricity. This electricity could be used to power the car's electrical systems, recharge the batteries, and perhaps most importantly, run the electric motor in hybrid electric vehicles.

Using a shape memory alloy (SMA), electricity can be produced from the exhaust heat. The power output would be sufficient to handle heated seats and air conditioning. A SMA wire contracts when heated and returns to its original shape when it cools.  A wire loop could be used in an electric generator to recharge the battery. This is done by winding SMA material in a generator. 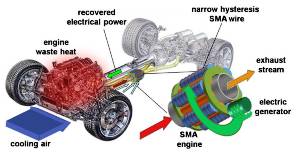 Energy can be captured from the human body through the body's movement or kinetic energy.  The human body also generates energy in the form of heat that could also be used to run low-power electronic devices just from the difference in temperature between the body and the surrounding air.

New devices can harness heat energy from the body with just a small temperature difference of one or two degrees. This would produce about 100 microwatts, which is not sufficient to recharge your mobile phone; but it would be enough to run low-power devices, such as biomedical monitoring systems.

The power consumption of various electronic sensors, processors and communications devices have been greatly reduced over the last few years, making it practicable to power these devices from very low-power energy collection systems, such as wearable thermoelectric systems. 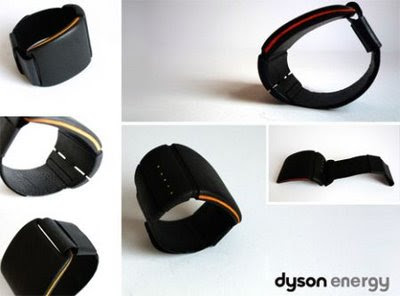 The Dyson Energy Bracelet is a gadget that uses the Seebeck effect to harness energy to power mobile phones for a short time. The Seebeck effect is where the temperature difference between the surface, which touches the skin and the other surface which is in the ambient air, produces electricity that is saved in a battery. When the user needs to recharge a mobile device, s/he plugs it into the Dyson Energy bracelet through a micro-USB port, producing additional minutes of use.

Researchers have developed a new battery technology that captures waste heat and converts it into electricity. Excess heat is generated by industrial processes. Efforts have focused on thermoelectric devices but the efficiency of such devices is limited by the availability of materials. 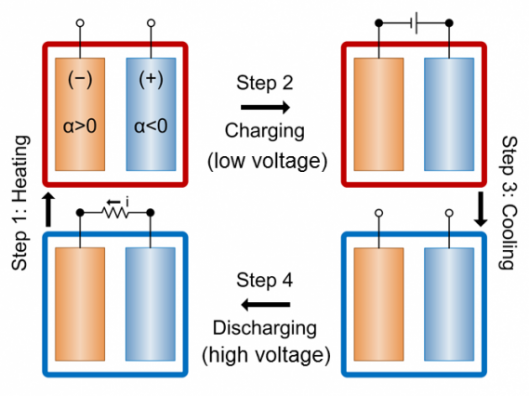 If you have a lot of heat, you can use the heat to generate steam, and use the steam to spin a turbine. The turbine can drive a generator, which produces electricity. This setup is very common, but it requires a fair amount of equipment and space. To generate electricity from heat in a simple way that has no moving parts thermocouples would be needed. 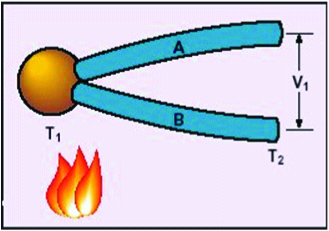 Thermocouples take advantage of an electrical effect that occurs at junctions between different metals. Take two iron wires (T2) and one copper wire (T1). Twist one end of the copper wire and one end of one of the iron wires together. Do the same with the other end of the copper wire and the other iron wire. If you heat one of the twisted junctions and attach the two free ends to a volt meter (V1), you will be able to measure a voltage. If you hook the two iron wires to a battery, one junction will get hot and the other will get cold.

Most of the energy, which we create from burning fossil fuels, is completely wasted, as it turns to heat and floats away. Between 20- 50% of industrial energy input is lost as heat, being vented into the atmosphere as polluting exhaust gasses.

The Sterling Engine converts this waste into usable electricity and boosts the efficiency of conventional power plants by making industrial exhaust into a power source. Sterling Engines work on the basic principle that the difference between hot and cold fluids can generate mechanical motion. A heat source vaporizes and expands a fluid that pushes against a piston. When the fluid condenses as it cools, the cycle repeats.

To watch a demo, click on the Sterling Engine.

In the United States, more than half of the energy we burn each year gets lost as heat instead of being put to use with most of the energy going out the exhaust pipe of a car or out the smokestack of a power plant. If we could reclaim a small fraction of what we throw away as heat, that would have a significant impact on our energy use.