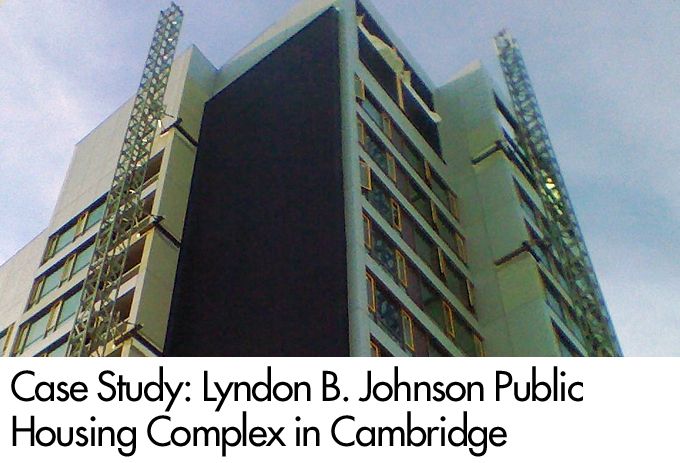 The HVAC systems in commercial buildings account for 32% of the total energy consumption in the United States according to the Centre for Climate and Energy Solutions. Upwards of eighty- five percent of this energy comes from non-renewable, fossil fuels. There are several ways to use energy more efficiently, and produce energy using renewable sources with products that integrate aesthetically, seamlessly and cost effectively within a buildings’ architecture.

Unglazed, transpired solar air heating systems have high operating efficiencies (70% to 89%), and utilize existing building mechanical systems in high rise applications in order to function. Such systems are designed for cold climates, demonstrating an incremental payback history of between two and eight years with best installations located in areas with cool weather but significant sunshine. Given their relatively quick payback, ease of integration on new or retrofit applications and the aesthetically pleasing designs, building owners planning façade renovations should evaluate whether a transpired solar air heating systems is a viable option. 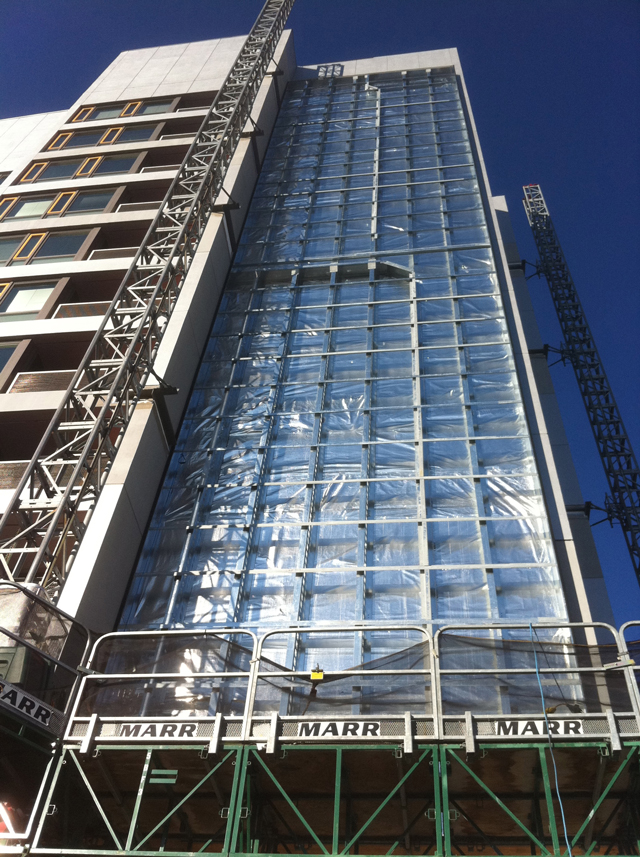 In the northern latitudes a dark, perforated, metal cladding (absorber) is installed on a south- facing wall over the building’s ventilation intake system. Both diffuse and direct solar radiation strike the absorber and as the air passes through the perforations the sunlight is converted into heat. 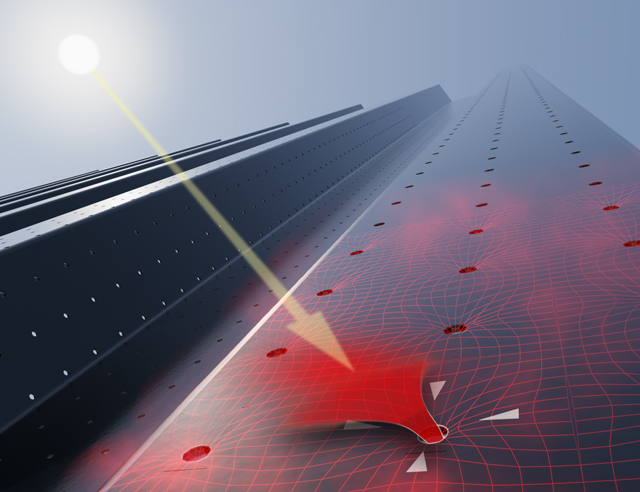 Outdoor air is drawn through the perforated exterior cladding at flow rates of 4 – 7 CFM/ft 2 of collector area and into the void cavity between the cladding and the building’s exterior structural wall. Higher air flow rates are suggested for high-rise applications to mitigate the impact of heat loss due to ambient wind on the absorber. As the air travels through the plenum, it is heated up to 250 C over ambient temperatures and the warmed air is then drawn into the building as fresh ventilation air. According to ASHRAE Standard 55, the temperature of the air in a building should range from 20 to 240 C during the winter and transpired solar air collectors serve to pre- heat ventilation air by up to 230 C without using other fuels thereby reducing energy demand.

"The energy retrofit at LBJ Apartments is a showcase for clean, renewable technologies.” said Greg Russ, CHA's Executive Director. "Matrix Energy’s solar heating system is part of the technology package that will contribute to our effort to reduce our environmental footprint, by adding renewable energy technology that pays for itself, improves the performance of the building and introduces new energy conservation techniques to the region."

The $23 million CHA project was financed through a $10 million grant under the American Recovery and Reinvestment Act (ARRA) implemented by the U.S. Department of Housing and Urban Development (HUD), and is designed to meet the standards of HUD’s Green Communities Program for Substantial Renovations. It is one of only thirty six projects in the nation funded under the grant program, requiring commitment to a "transformative change" in the approach to energy use.

The project is on track for a 50% reduction in energy use at the property, as well on-site renewable energy generation exceeding 10% of the projected post retrofit energy needs. The solar air heating system custom-designed for LBJ Apartments by Matrix Energy will produce approximately 300 million BTUs of solar heating during each heating season, cutting annual natural gas consumption by more than 100,000 kWh – more than $5,000 in savings - while providing an annual 18 tonne reduction in CO2 emissions. In addition to being entirely maintenance free, unglazed transpired solar air collectors are recognized for their air filtration ability with studies (Enermodal, February 2000) showing a 50% reduction in particulate matter entering the HVAC system resulting from the static build-up of dirt particles around the perforations that are cleaned naturally by rainfall.

Since 1990 Matrix Energy has supplied nearly 500,000 ft2 of solar air heating collector area spanning hundreds of projects within the commercial, industrial, institutional and agricultural markets in North America and the EU totaling over 2,800,000 CFM of fresh air and nearly 8,000 tonnes of avoided CO2 emissions each year.

About Cambridge Housing Authority
Cambridge Housing Authority (CHA) is a national leader in the development, management, and administration of subsidized affordable housing for low-income elderly, family, and disabled households. Their mission is to develop and manage safe, good quality, affordable housing for low-income individuals and families in a manner that promotes citizenship, community and self- reliance.

CHA participates in the U.S. Department of Housing and Urban Development's groundbreaking Moving to Work Deregulation Demonstration (MTW). MTW provides CHA with regulatory flexibility that is generally not available to Public Housing Authorities. CHA uses this flexibility to explore new ways to provide affordable housing, education and paths to economic independence to the City's low-income families, elders and individuals with disabilities.

Our RE Series batteries are designed to provide the highest peak capacity, longest cycle life, and greatest reliability for use in industrial or residential renewable energy applications. Renewable Energy Series batteries utilize the company's exclusive XC2â„˘ formulation and Diamond Plate Technology® to create the industry's most efficient battery plates, delivering greater watt-hours per liter and watt-hours per kilogram than any other flooded lead-acid battery in the market. Our Deep Cycle batteries are engineered to work with solar panels as well as other renewable energy applications.
More Products
Feature Your Product