How solar is reducing farm shop's CO2 emissions and overheads. 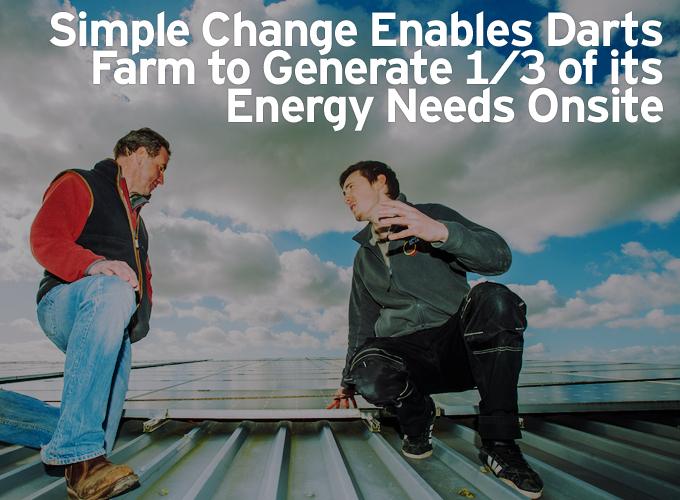 Award-winning Devon Farm shop Darts Farm is nationally renowned for sourcing first-rate local produce, so it’s no surprise that the businesses has kicked off 2015 by generating 1/3 of its own energy onsite too.

Darts Farm already had a solar ‘tracker’ and a 300-panel roof-mounted system, which was installed in 2011, but this new move has added another 326 panels, resulting in a total of 170 kWp of solar PV.

“At Darts Farm we have a clear belief that everyone can do their bit reduce the world’s reliance on fossil fuels, and this is the next step in our journey,” said owner Paul Dart.

How Darts Farm uses 100% of the solar energy it generates

100% of the energy generated by the panels is used onsite by the farm retail business, generating a 19% return on investment, and reducing its carbon emissions by 80 tonnes per year.

“It’s wonderful to not only generate our energy but also to use it to run the business,” added Paul.  “Our electricity is on all day, 365 days-a-year, so we make the best use of what we produce.”

Darts Farm had its first system designed and installed by local specialists SunGift Energy in 2011 and it chose the Exeter-based company to carry out this second project too.

“Our first system has worked extremely well – lowering our energy bills and providing such a good return on our initial investment that it will have paid for itself in just six years,” added Paul. “The real question we had to ask ourselves was ‘if we have the available roof space, why would we not invest in more solar panels?’ So, it was only a matter of time before we went ahead.

“There was no question of who would do the work either.  SunGift is a trustworthy, professional company and not only did they do an exceptional job the first time, but also the system has performed exactly as they said it would. We’re thrilled with the work they have done.”

The majority of commercial solar PV systems use 250 kW panels, but Darts Farm’s newest installation, totalling 90 kWp, uses new JA Solar 275 kW panels.  Joe Perry from SunGift Energy explained: “We specified these panels for Darts Farm because not only do they generate more energy from a small amount of space than traditional panels, but also they can costs less per watt to install, so you get the best of both worlds.

“This is an approach that we incorporate into every one of our customer’s jobs, whether they are a homeowner, a small business or a multinational company. By designing personalised systems that use the world’s most advanced solar technologies, we can ensure that renewable energy systems in the south west are among the very best in the world.”

“The result is a system that – thanks to energy savings and the government’s Feed-in Tariff (FiT) – will have paid for itself in just over five years.  With 15 more years of FiT payments that’s an excellent investment and demonstrates why we are getting an increasing number of enquiries from organisations interested in solar PV on their roof.”

About SunGift Energy
SunGift Energy is a renewable energy specialist that offers a personal design service and tailored systems to meet its customers’ exact requirements.  It fits a whole range of renewable energy technologies – from solar panels and heat pumps to biomass boilers and small wind turbines.

Formed in 2005 by owner Gabriel Wondrausch, the friendly Exeter-based company employs 30 members of staff, and was one of the first installers in Devon to be accredited to the government’s Microgeneration Certification Scheme (MCS). SunGift has completed more than 1,500 renewable energy projects and 1is acclaimed by the industry, winning the 2011 and 2009 South West Green Energy Award for Renewable Energy Installer or Supplier of the Year, and finishing runner up in the same category in 2010, 2012 and 2013.  SunGift is also the top ranked installer in the UK, on the independent website www.yougen.co.uk, which ranks companies based on customer feedback.

Using the highest-quality systems is an important part of SunGift Energy philosophy, and it constantly strives to use the latest, cutting-edge equipment, combined with the highest standards of workmanship.

For further information contact SunGift Energy on 01392 213912, or visit www.sungiftsolar.co.uk.