The current suggested guideline by the NRCA (National Roofing Contractor Association) for the installation of a PV system on a steep slope asphalt shingle roof as far as the flashing of the PV system stanchions, shows the metal flange to be applied underneath the roofing paper.

Building a PV array to face the diverse environmental challenges of each site such as wind, moisture, hurricanes can be very challenging but Roof-Tech’s vast experience of deploying PV arrays in Japan is now making waves in the US. Basic simple Japanese design with quality and proven materials.

First, each PV module is secured with multiple fasteners to spread the mechanical load evenly throughout the roof surface and more important to alleviate the torsion applied to a roofing system due to thermal stresses, being that the thermal contraction and expansion of an array which is built mostly with aluminum with a high coefficient of thermal expansion has the most movement on top of a roof. Our design, being that the rail is the module frame, has mitigated such effects that a minimum distance between adjacent rows can be as low as 3mm (1/8”). Notice that mid and end clamps are 4” wide for the purpose of distributing the clamping pressure on a larger surface of the PV panel frame. 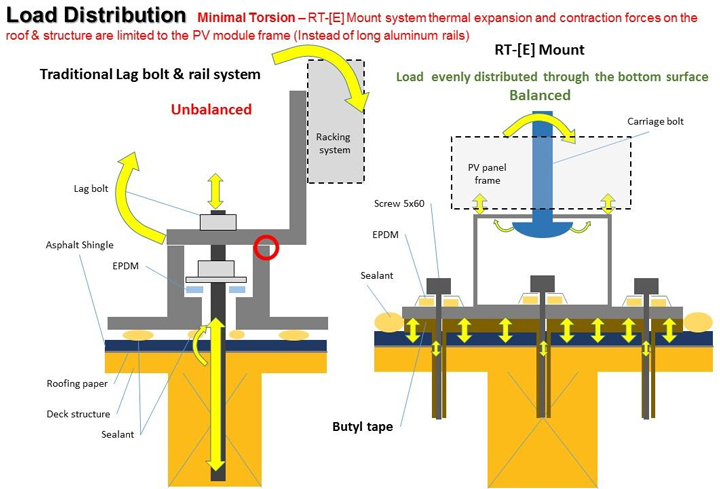 The next step is the perfect sealing of each attachment point with our own RT Butyl tape. Butyl was first developed in the early 1930’s and today is the most important material for the inner linings of tubeless tires. Among its traditional applications are pool linings and flexible flashing for construction.

Butyl rubber’s unique combination of barrier properties, high damping, resistance to ozone, weatherproofing and heat aging make it the ideal choice for many construction applications.  For instance, butyl rubber is commonly added to asphalt compositions in the manufacturing of roofing materials to improve the weatherproofing and low-temperature properties of the asphalt.

Roof Tech’s RT Butyl flashing, provides unprecedented impermeability and elasticity. It is easy to mold yet highly resistant to punctures. It retains its elasticity and strength when exposed to service temperatures between -40°F and 248°F.  Even with extreme fluctuations in temperature, butyl tape allows for expansion and contraction while preventing moisture from passing through. It has an effective life of 20 years + and is resistant to aging weather, mildew, acids, alkalis and salts. It is common knowledge that no matter how the attachment of a PV array is achieved, the ultimate sealing point is exactly at the penetration in the roofing paper where a lag or fastener gets attached to the frame or roof sheathing and we all know that this is conventionally accomplished with the use of sealants. If you pick up your sealant of choice and check the upper service temperature for that product you may find it to be maximum of 200F. The other two I happened to check were 160 and 170 degrees Fahrenheit respectively. RT Butyl performs at higher temperatures (248F) which will make it a longer lasting due to heat distress.

At Roof Tech’s parent company Yanegiken, a product is not released to the market before diligent engineering and testing. At the laboratory, complete roofing sets were tested under extreme conditions of constant UV light, 145.4 F temperature, 50% humidity and every two hours a water spray inside the Carbon Arc machine. The specimens were monitored throughout the testing time and at 7500 Hrs. (almost 1 year later), the specimens were evaluated. RT Butyl tape was still flexible and performing its job.

The code is simple and objective as far as flashings for the PV supports and states that roof mounted PV system flashings must be installed in a manner that prevents moisture from entering penetrations through the roof plane (IBC & IRC 2012). The current suggested guideline by the NRCA (National Roofing Contractor Association) for the installation of a PV system on a steep slope asphalt shingle roof as far as the flashing of the PV system stanchions, has the metal flange applied underneath the roofing paper (under the upper underlayment) for the proper water shedding. It is the only way to create a proper water shedding flashing mechanism. Such step can only be accomplished along with the installation of a new roofing system. This can’t be done on a retrofit of a PV System installed above an existing roof, which is the majority of installations in the US.

The Center for Environmental Innovation in Roofing does not recommend water shedding flashings on the roof where there is potential ice damming such as eaves or overhangs and all around the PV array. It is recommended to use waterproof flashings in areas where ice damming may occur.

The other issue from installing metal flashing between roofing shingles is yet to be further discussed, as far as the effect on the warranty of the roofing material itself, since the separation of the shingles can be treated as a failure to seal the roof (blow-offs) which normally will drastically reduce the warranty from the roofing manufacturer, like for instance a GAF roofing product had it reduced from a 50 yr. down to a 15 yr. roof warranty terms for the failure to seal. The roofing manufacturer will become more involved as far as recommendation for the installation of PV systems on top of their roofing products based on future codes yet to be adopted. 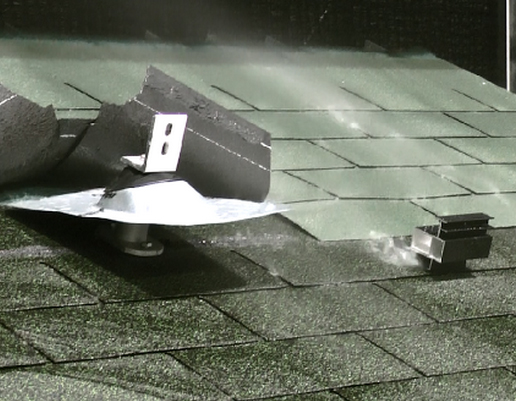 RT-[E] Mount is supplied with the RT Butyl tape flashing and we can claim 100% waterproofing on low and steep slope asphalt roofing applications while still fully complying with code requirements. It is fastened with 5mm stainless screws therefore no need for a pilot hole and by code the area for the attachment to the rafter is wider when compared to the 5/16” (8mm) usual lag bolt (NDS 2015). This allows the installer to easily meet code without the risk of splitting a rafter. According to the NDS 2015, being that the attachment on the rafter is parallel to the grain, the minimal distance or rather the clear distance to attach a bolt or screw to secure the PV attachment from the edge of the rafter is 1.5 X D (D=shaft dia.) = 7.5mm (5mm screw) versus 11.91mm for a 5/16” (8mm) lag bolt. This means that with the 5mm fastener, RT-[E] Mount gets a wider area for the installer to have it fastened in order to meet the NDS code. 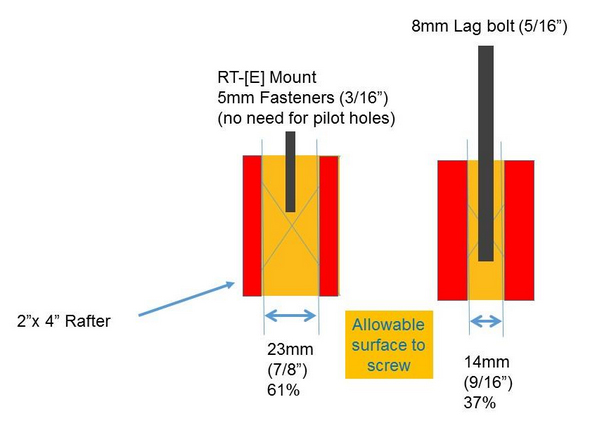 Installation time savings is just another benefit with the RT-[E] Mount: The array installation (Photo 1) would normally take 2 hours with a rail based system. Once the installer got to understand the process, the time for similar array assemblies dropped to 40 minutes. (Photo courtesy Border Solar)

Photo: A recent installation in Southern Texas by Border Solar where RT-[E] Mount is placed on a Tile Roof (asphalt roofing system installed underneath the array). It’s a great looking array and the extra cost of the asphalt roofing installation can be offset by the additional installation time when installing PV arrays on top of tile roofs.

Roof Tech is founded on 40 years of experience in the roofing industry with over 400,000 (and counting) PV residences in Japan and all sealed with the same butyl tape, deployed in the last 20 years.

RT-[E] Mount® is the first and only fully waterproof PV mounting system, tested, certified and code compliant. It truly becomes “One with the Roof”

I encourage you you to examine the data from the ICC Evaluation Report. The report is based on extensive testing for water resistance and durability. Professional Engineering (PE) reports for the attachment to the roof decking (OSB 7/16”, Plywood 15/32”), as well as for rafter installations are also readily available on the support page at roof-tech.us/support/.

Please visit us at:

About Milton Nogueira
Milton Nogueira has been an advocate of solar energy for nearly three decades and has extensive experience in photovoltaic system design and sales. In early 2013, he joined Roof Tech in their first U.S. operation. In his role as Senior Business Development Manager, Milton cultivates new business opportunities nationwide through training and outreach and oversees the company's marketing efforts.

Previously, Milton worked for 17 years as a sales engineer for a major distributor of solar photovoltaic systems in Northern California. He is a former board member of the Northern California Solar Energy Association and holds a C-46 California contractor’s license. Milton earned his bachelor of science in Mechanical Engineering from the University of Santa Catarina in Joinville, Brazil.