Why it is the most successful reclamation system on the planet. 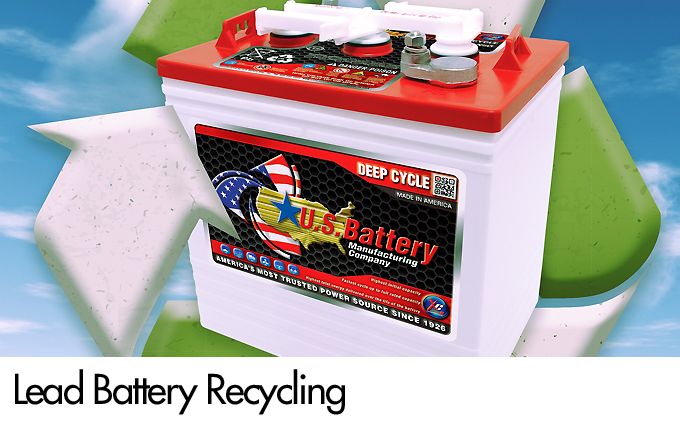 The tendency to migrate towards new technologies is one way for many industries to reduce the environmental impact of their operations. But the facts show that some traditional methods can still be some of the most environmentally friendly. Flooded lead-acid (FLA) batteries, for example, have been used commercially for more than 150 years. Because they contain lead, sulfuric  acid, , and plastic it is often mistakenly assumed that they have a negative impact on the environment.   However, the facts are that lead-acid batteries are recycled at the highest rate of any commercial product - a rate that is tracked by the Battery Council International at 97 to 99 percent and increasing every year.  So when new battery technologies claim to be more efficient and better for the environment, none come close to the recycling rate and infrastructure of lead-acid batteries.

The difference is clear when you compare the lead-acid battery recycling rate to other materials such as aluminum cans (55%), paper products like newspapers (45%),  and glass and tires (<30%).

The recycling infrastructure for lead-acid batteries is a closed loop (cradle to cradle) system.  As an example, manufacturers like U.S. Battery manufacture new FLA batteries from recycled raw materials and the safe delivery methods used to ship batteries worldwide are also the same methods used to return spent lead-acid batteries to be recycled. The process happens over and over again and over the years has become extremely refined and efficient, making it one of the most successful environmental reclamation systems in existence..

There are several processes involved in recycling lead-acid batteries. The lead from spent batteries is smelted and refined to be reused to build new lead-acid batteries. Lead recycling facilities are controlled under some of the strictest U.S. EPA regulations.  Over the years, innovative systems have been developed to  capture all of the components of lead-acid batteries for recycling . For example, the sulfuric acid electrolyte is captured and neutralized during the recycling process and then processed into fertilizer.

The fact that nearly 100 percent of the lead in batteries is recycled also helps to contribute to keeping lead as a sustainable raw material . This helps keep costs low because the manufacturing of FLA batteries is not dependent upon the fluctuating market prices for virgin, mined lead as a raw material.

The other components of lead-acid batteries are also recycled and used in many commercial products including new batteries.

With a high recycling  rate and low operating cost, the FLA battery remains the best solution for most electrically powered vehicles such as golf cars, floor maintenance machines, access lifts, and other battery operated vehicles. It is also the most efficient technology for storing energy and has the longest track record for safety and reliability. So when you combine this with the highest recycling rates on the planet, it stands to reason that this 150-year-old technology has definitely evolved into an energy source that's hard to beat.