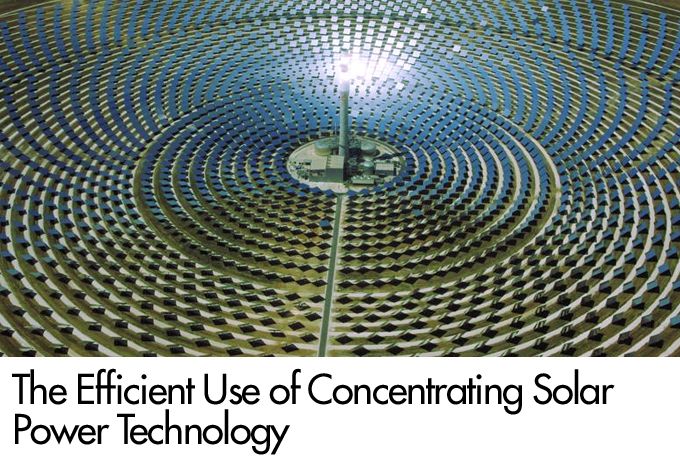 Concentrating solar power (CSP) plants use mirrors to concentrate the energy from the sun to drive traditional steam turbines or engines that create electricity.  The thermal energy concentrated in a CSP plant can be stored and used to produce electricity when it is needed, day or night.

Power plants today use fossil fuels as a heat source to boil water and drive a large turbine, which drives a generator to produce electricity, using the sun as a heat source.

A CSP plant operates most efficiently when built in sizes of 100 MW and higher, requiring about ten acres of land. They also work most efficiently in areas of the country that have a high concentration of sunlight.

There is international interest in a new form of CSP, called STEM, for off-grid applications to produce 24 hour industrial scale power for mining sites and remote communities. STEM uses fluidized silica sand as a thermal storage and heat transfer medium for CSP systems.

The prospect of gas-solid fluidized beds as useful components in CSP is accepted by the solar industry. By using fluidized solids as alternative to other storage and exchange media, like molten salts, there is an opportunity to overcome concerns that are associated with the use of corrosive or environmentally unfriendly fluids and to operate the receiver at much higher temperature.

There are four types of CSP. These are: parabolic trough system, linear Fresnel reflector, power tower and dish/engine.

Parabolic trough systems have been in wide use for utility-grade power generation since the mid 1980’s.  While the other designs have distinct attributes and performance characteristics that make them a potentially attractive option, only the parabolic trough has been in use for 30 years.

A parabolic trough system uses curved mirrors to focus the sun’s energy onto a receiver tube that runs down the center of a trough. In the receiver tube, a high-temperature heat transfer fluid—such as a synthetic oil—absorbs the sun’s energy, reaching temperatures of 750°F or higher, and passes through a heat exchanger to heat water and produce steam. The steam drives a conventional steam turbine power system to generate electricity. Individual collector modules are typically 15-20 feet tall and 300-450 feet long.

All parabolic trough components, including the frames and support structures, the reflector surfaces, receiver tubes, sun-tracking drive and control system, and heat transfer fluid system, have been assessed and optimized over numerous design changes. The information garnered from testing and experience has been used to improve continuing performance and reduced cost.

Parabolic trough plants are modular and scalable, which is essential for achieving low cost through high volume production of components and subsystems. By adding more rows of troughs it is relatively easy to produce hundreds of megawatts.

A parabolic trough solar field has energy storage that allows electricity production to continue well after the sun has been blocked by a cloud. Depending on the plant’s size, energy production can last 15 minutes or more. This allows the electrical output of the plant to remain stable during periods of partial cloud cover. This extra time gives a utility time to change to other generating sources when the sun sets.

A compact linear Fresnel reflector uses the same theory of curved-mirror trough system, but uses long parallel rows of lower-cost flat mirrors. These modular reflectors focus the sun's energy onto elevated receivers, which consist of a system of tubes through which water flows. The concentrated sunlight boils the water, generating saturated and superheated solar steam for use in power generation and industrial steam applications, thereby generating electricity.

Solar thermal energy is collected and concentrated with mirror reflectors equipped with tracking devices to maximize the amount of solar energy collected over the day. The reflected sunrays are focused on a receiver tube located on the focal axis of the reflectors. Inside the tube, a heat transfer fluid, which is heated, evaporated and superheated by the concentrated solar energy, is circulated, thereby producing electricity. The Fresnel reflector is similar to parabolic trough, but it has a fixed receiver pipe while the mirrors track. The trough shaped reflector is split into multiple small mirror facets.

The term Fresnel was named after the French physicist of the nineteenth century, Augustin-Jean Fresnel, who studied the behavior of light. He noted that small strips of light can be aimed together to form a single, intensely bright image. The Fresnel effect can be found in many optical devices today.

Power tower systems use a central receiver system, which allows for higher operating temperatures and thus greater efficiencies. Large, flat sun-tracking mirrors, known as heliostats, track the sun along two axes and focus solar energy on a receiver at the top of a high tower. The focused energy is used to heat a transfer fluid to over 1,000° F, which produces steam and runs a central power generator. Some power towers use water/steam as the heat-transfer fluid. Commercial plants can be built to produce up to 200 megawatts of electricity.

By using highly efficient molten-salt energy storage system, one plant in California effectively used efficient collection of solar energy and the transmitting of electricity. It also regularly produced electricity during cloudy weather and at night. During one period, it delivered power to the grid 24 hours a day for nearly seven consecutive days before cloudy weather interrupted the process.

A dish/engine CSP uses mirrors that are distributed over a parabolic dish surface, which is about ten times the size of a backyard satellite dish, to concentrate sunlight on a receiver fixed at the focal point. In contrast to other CSP technologies that employ steam to create electricity via a turbine, a dish-engine system uses a working fluid such as hydrogen that is heated up to 1,200° F in the receiver to drive an engine. Each dish rotates along two axes to track the sun.

The dish/engine system produces relatively small amounts of electricity compared to other CSP technologies—typically in the range of 3 to 25 kilowatts.

The solar concentrator, or dish, gathers the solar energy coming directly from the sun. The resulting beam of concentrated sunlight is reflected onto a thermal receiver that collects the solar heat. The receiver is integrated into a highly efficient external combustion engine, which has thin tubes containing hydrogen or helium gas.

The dish tracks the sun continuously throughout the day to reflect the highest percentage of sunlight possible onto the thermal receiver. As concentrated sunlight falls on the receiver, it heats the gas to very high temperatures, which causes the gas to expand. The expanding gas drives the pistons, which turn a crankshaft and drives an electric generator.

Sunny skies and hot temperatures make the southwest U.S. an ideal place for CSP. Many concentrated solar power plants could be built within the next several years. A single plant can generate 250 megawatts or more, which is enough to power about 90,000 homes. That's a lot of electricity to meet America's power needs.