What is HD-Wave technology and how does it work?

Inverters usually switch their DC input between two or three voltage levels to create an average sine signal. This signal is very rough and then a large, heavy inductor (which is a magnetic electrical component) is used to filter this rough signal into a smooth and clean AC sine wave. With HD-Wave technology, SolarEdge initially creates a much smoother sine wave (a high-definition wave) thus avoiding the heavy and costly magnetic components while gaining efficiency.

How is this done?

Overall the improvement in the sine wave creation is 16 times compared to standard inverters, therefore we need 16 times less magnetics.

Overall the improvement in losses is 2 to 3 times, so we need less than half of the heavy aluminum enclosure to dissipate heat. 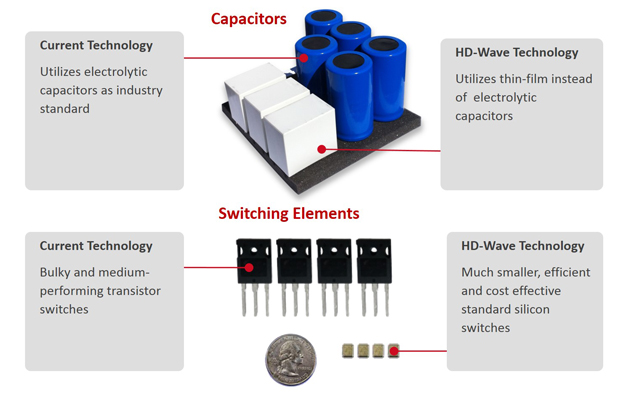 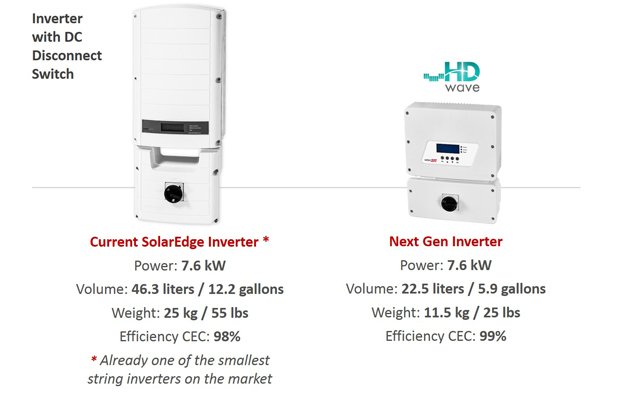 Why does the inverter industry need a breakthrough like HD-Wave technology? What has been holding progress back?

The PV inverter has remained largely unchanged for more than 25 years. For example, the power produced per pound - a key indicator of inverter cost structure - has only increased 5 times in 25 years. Now compare this to the semiconductor industry which doubles in power per unit weight every two years. Progress in inverter technology has been held back because conversion technology has remained fundamentally unchanged. Existing technologies force the usage of large magnetics and cooling elements, which make inverters expensive to manufacture and install. The addition of the processing power means that inverter improvement will now follow a much faster trajectory, as opposed to the sluggish path it has been on for the past quarter century. Just like the introduction of flat screen technology drastically accelerated the proliferation of televisions in the consumer market, new PV inverter technology can make solar energy more accessible across the globe.

How did SolarEdge develop this breakthrough? Are you effectively taking SolarEdge power optimizer technology and applying it to the inverter?

This technology is an addition to the innovation of module level power optimizers we introduced five years ago of which we have sold more than 7M units worldwide. This technology contributed to helping us find a way to improve inverter technology. I can say that the concept of using low-voltage switches at a high frequency is a concept we got from power optimizer design, so there is a connection between the two technologies.

What are the key benefits of HD-Wave technology?

Inverters powered by the HD-Wave technology will be smaller, lighter, and more efficient. They will have 16 times less magnetics. The cooling elements will be 2.5 times lighter. This provides benefits through the entire PV inverter supply chain: storage and shipping is easier for distributors, one installer can easily handle the inverter.

Is the technology best suited for large applications or does it scale down both technically and economically for the average home system as well?

How effective is the inverter powered by HD-Wave technology at getting rid of heat? This is a question many in the industry want to tackle, and while improved efficiency may be something that can be showed on a data sheet, inverters that operate at a high heat tend to lose efficiency - does the new HD inverter technology address this?

The weighted efficiency of inverters powered by HD-Wave technology reaches 99%. It may not seem like much to go from 98% to 99%, but it means that it has half the losses and half the heat. This is crucial in eliminating heavy metal parts from the inverter. That being said, an effective solution is still necessary to dissipate the remaining heat and we have several of those in the inverter design.

How did SolarEdge achieve 99% efficiency? Are you using SIC switching elements?

No, we are not using SiC switching elements. While SiC was heralded as a breakthrough in power electronics, they failed to move the industry forward. This is because any improvements in efficiency were overshadowed by premium costs of raw material, limited sourcing, and unproven reliability.

In SolarEdge’s HD-Wave technology, we are using low-voltage silicon MOSFETs in a multi-level switch topology. These distributed multi-level switching elements can create a sine wave that a powerful DSP processor can then synthesize into a clean size wave, versus the crude sine wave of current inverters. This means that less magnetics are required for the filtering. This highly efficient design with minimal heat loss thus reduces cooling requirements.

Please tell us a bit about SolarEdge and some of the other technologies you are working on?

SolarEdge, from its founding in 2006, has been developing innovative products at economic prices. In 2009, the company started sales and is now one of the leading players in the PV electronics market with >$300M of sales in FY2015. In March 2015 the company went public and is trading on the New York Stock Exchange.

We have achieved this success in a large part thanks to the company’s entrepreneurial spirit and culture, which support leveraging multidisciplinary knowledge transfer and promotes product innovation. We pioneered the DC power optimizers market and continue to transform the PV inverter market by breaking through many of the technical obstacles that were holding back PV proliferation. SolarEdge technology maximizes power production through module-level MPPT, optimizes roof utilization through constraint-free design, while also enhancing maintenance by providing remote troubleshooting through its cloud-based monitoring platform. The company’s products meet some of the highest safety standards, with its SafeDC™ mechanism that is designed to shut down DC power for installer, maintenance personnel, and firefighter safety.

This year, SolarEdge announced a number of exciting new inverter products. On the storage front, SolarEdge announced its DC coupled storage solutions, StorEdge™, which will provide energy independence by allowing home owners to maximize self-consumption and backup power. The solutions are designed to utilize a single SolarEdge DC optimized inverter to manage both PV and storage applications.

In addition, SolarEdge extended its commercial solution to include, SE20K and SE33.3K three-phase inverters. Meant to minimize the number of inverters and improve system ROI, these are some of the smallest inverters in their class currently on the market.

The company is among the few companies in its field which are currently profitable this calendar year (in the year ended June 30, 2015 GAAP profit was over $21M) and financially strong with more than $145M of cash in the bank. I think our growth rate and current success should serve as a good reference to our capabilities. 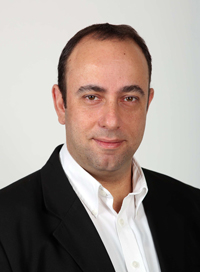 Mr. Lior Handelsman co-founded SolarEdge in 2006 and currently serves as our Vice President, Marketing and Product Strategy where he is responsible for SolarEdge’s marketing activities, product management and business development.

Prior to co-founding SolarEdge, Mr. Handelsman spent 11 years at the Electronics Research Department (‘‘ERD’’), one of Israel’s national labs, which is tasked with developing innovative and complex systems. At the ERD he held several positions including research and development power electronics engineer, head of the ERD’s power electronics group and manager of several large-scale development projects and he was a branch head in his last position at the ERD.

We saw that by combining EV charging and solar production into one integrated solution, we could improve the way energy is produced and consumed. In addition, it made sense to embed an EV charger in an inverter as both verticals share similar customers.

Power optimizers have the advantage of finding and quantifying failures continuously during operation.