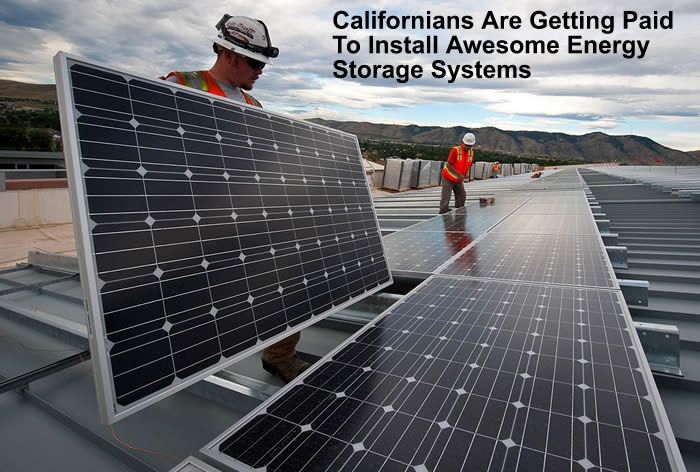 SGIP stands for Self Generation Incentive Program, a way to motivate consumers to use alternative energy sources to generate and store their own electricity. The SGIP hails from California, where it stands as the longest running and most successful programs of its kind in the country. In short, the program pays Californians for using certain renewable energy systems, like turbines, and also pays households with energy storage systems, like home batteries. We’re not talking about a few extra pennies, either. The SGIP pays energy storage users over a dollar per watt. This means that home battery owners in California not only enjoy backup power and blackout protection along with lower (or even non-existent) electricity bills… they also get paid.

For projects that are under 30kW, which would include most residential systems, 100% of the incentive is paid up front, easing the cost of renewable energy systems quite a bit for Californians that take advantage of the SGIP. The complete list of eligible projects is as follows:

An additional 20% incentive is available for the installation of eligible Advanced Energy Storage technologies, as long as they come from a California supplier.

The SGIP caps incentive payment at 3MW (which is a ton -- most residential systems max out under 20kWh), but there is no minimum eligibility system size. No matter how small of a renewable energy or energy storage system you’re looking at, you are eligible for money. Free money. After your incentive claim is completed and reviewed, Pacific Gas & Electric issues you a check within 30 days.

The SGIP has been extended all the way until January 1, 2021, giving you plenty of time to take advantage of some serious cash.

Motivated by a Vulnerable Grid

The SGIP was initially put into place as a program to reduce peak-load demand in California. Basically, the grid wasn’t able to handle the electricity needed by Californians during the hours they needed it the most, usually around 5:30 pm. To help ease the burden, the SGIP offered to pay consumers to generate their own energy, so the grid didn’t have to provide quite as much. No one wanted to re-live the events of 2001.

Let us refresh your memory: 2001 was the date of the California electricity crisis (also known as the Western U.S. Energy Crisis), which resulted in blackouts for 1.5 million customers in the middle of March. The crisis was so bad, the governor didn’t end the state of emergency until November 13 of 2003. The California electricity crisis exposed the vulnerability of the power grid, motivating California and its occupants to ease their dependence on the grid, and look for more secure energy sources.

Despite these efforts, the power grid remains unstable. Ted Koppel’s recent book, Lights Out, illuminated the growing threat of a disabled power grid. Though our country’s utilities are an invaluable resource, the systems still rely on 1970s era technology. Updating utility systems means interrupting service, so it’s rarely done. Our current power infrastructure simply wasn’t designed to stand up to modern threats. When it was originally designed, the concept of web hacking simply wasn’t there.

The electrical grid is particularly weak because its network is spread out over many installations that are miles apart. An infrastructure like that is difficult to protect. Targeting the power grid is also appealing because of the domino effect that disabling the grid would have on our country. In basic terms, electricity keeps all our other systems running. Take down this single system, and the rest will follow. We’ve backed ourselves into a situation where the technology we possess to detect and monitor infiltration of our power grid depends on the grid itself. Not ideal, right?

Don’t Rely on the Unreliable Grid

Fortunately, you don’t have to be at the mercy of a vulnerable grid. The weakness of the grid is the reason California’s offering the SGIP in the first place. Energy storage changes the entire conversation about grid vulnerability. We don’t have to talk about prolonged power outages as a impending probability, but a situation that can be avoided altogether. Home batteries put the power back into the hands of the consumer, and back into the appliances and systems we need to sustain our lives.

Households equipped with solar panels and energy storage in the form of home batteries will be completely protected from any utility company mishap, whether it be on a large or small scale. Home batteries allow households to power their own essential appliances like refrigerators, water pumps, and heating/cooling devices with stored electricity collected from renewable energy sources like solar panels. The grid may be vulnerable, but the sun? Not so much.

Get Paid to Build Your Energy Fortress

It’s time to make your house awesome… and get paid to do it. The SGIP will pay you to add an energy storage system to your home. If you have solar panels (or even if you don’t), getting a home battery just makes sense, even without the SGIP’s check coming in the mail. The price of electricity from the grid continues to rise, while prices of home batteries, along with solar photovoltaics, are falling fast as the technology becomes more and more popular. If you’re already generating energy during the day, get a home battery to save it for the evening, when you need it the most. If you live in California, the SGIP will pay you for something you already want -- lower-cost, clean energy, independence from the grid, and blackout protection.

As you can see on the list above, one of the highest incentive categories is Advanced Energy Storage, rewarded by $1.46/W. Advanced Energy Storage technologies convert electricity (like the electricity generated by solar photovoltaics) into energy, store it, then convert it back to usable electricity at a later time. The lithium-ion home battery is a common, economical example of Advanced Energy Storage. Some home batteries store energy straight from the power grid, enabling owners to store power from the grid when demand and price is low, and use it later on in the evening, when many power companies hike prices and charge additional fees. Other home batteries store energy generated from outside, renewable sources like solar panels, giving owners the luxury of storing energy during the day when the sun’s rays are the strongest, and use that energy in the evenings when the sun goes down, and they need electricity the most. Either method is accepted under the SGIP, and eligible for compensation.

If you’re looking to get one of the highest rewards through the SGIP and install an incredibly useful addition to your home at the same time, energy storage is definitely the way to go. Installing an energy storage system, like home batteries, alongside solar panels, can not only provide you with cheap, clean energy, but protect you from blackouts as well. Who knew back-up power was so economically advantageous?

The SGIP makes installing an energy storage system more appealing than ever. Now, installing a home battery in your home will not only cut your electricity bill, reduce your carbon footprint, and protect you from the next inevitable blackout, but make you eligible for free money through California’s SGIP. It’s pretty much a dream come true.

About Anna Gretz
Anna Gretz writes for Swell Energy's blog, The Swell. Swell Energy is a group of energy nerds in California with a dream energy independence for everyone. For more information about Swell Energy and California's SGIP rebates, go to www.swellenergy.com