Electric transportation holds the potential of a greener future. As technology progresses, Ultra-Low Emission Vehicles (ULEV) (comprising of plug-in hybrids, electric vehicles, and fuel cell vehicles) will play a significant role in the way we commute. But current battery technology restricts how far we can go on a single charge. The deployment of plug-in charging networks have already installed been in cities and towns locations globally, but there is a germane necessity for a charging system that will enable EV’s to travel safely, and grander distances, on the road network using only electric power. One conceivable solution to this predicament can be “Electric Charging Roads” that will charge electric vehicle as we drive on it. The potential of recharging low emission vehicles on the move offers exhilarating possibilities.

This is precisely what ‘Highways England’ is planning to devise for drivers of electric vehicles Highways England, the government-owned company that manages England’s road network, plans to conduct off-road trials of a system that can charge EVs as they drive down the motorway. The outlook of physically extracting energy from the roadway might just become a reality, though, if the U.K. government pulls off the test run of the promising new technology. The Highway Agency’s existing research collaborations are across-the-board and contain partnerships with organisations from the UK, European and international stage. The Agency is developing a more strategic approach to collaborative research and is increasingly focusing on identifying those organisations in the UK and internationally which offer the most potential for knowledge transfer. This is a strategic component of the Highways Agency’s Strategic Plan 2010–15, to develop smarter collaborations.

These new charging roads planned by the U.K. government will have mechanism as same of like wireless phone chargers, i.e. using magnetic induction technology. Inductive charging offers a concrete solution to this. Cables buried underneath the roadway would generate electromagnetic fields that could be picked up by a receiver in the vehicle and transformed into electric power. The system would require a communication system, so that the roads can detect if a vehicle is coming and initiate the process. Wireless charging technology already has been proven to work, both in phones and buses. As this is a process provides a charge to electric vehicle batteries without the need for plugging the vehicle into a charging point, it can be done whilst the vehicle is stationary or on the move. Where inductive charging occurs whilst a vehicle is on the move, this is known as dynamic charging. 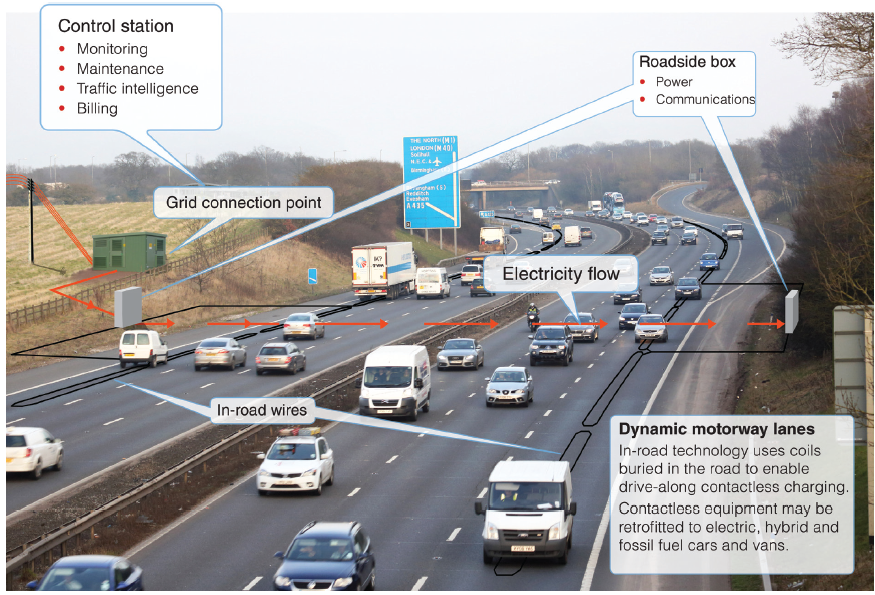 In simple terms, the system has power lines connected to coils under the surface of a road, which will transmit the electricity through the air to a receiver coil in a vehicle. Thus, driving down the stretch of road in an equipped electric vehicle will power up the batteries. Dynamic Wireless Power Transfer (DWPT) is being measured feasible for a number of reasons. It could theoretically be implemented on all vehicle types and classes (unlike conductive charging systems). It overcomes issues (whether real or supposed) with battery performance by receiving power while traveling. Because DWPT systems can be installed underneath the road without any additional noticeable infrastructure, they do not present additional safety risks such as collisions or electrical safety and potentially lessen the need for maintenance.

The U.K. has already tested a numerous approaches to this technology and identified versions that can work and are ready to manufacture. Currently, the off- road trials phase is being tested out that follows the completion of research testing by Highways England of the practicability of wireless in-road charging. The off-road trials involve fitting vehicles with wireless technology and testing the equipment, installed underneath the road, to duplicate highway conditions. Full details of the trials will be publicised when a successful contractor will be appointed. The trials are expected to last for approximately 18 months and as per the results, could be trailed by on road trials. From Highways England and Andrew Jones MP.

The model for the off road trial is derived by the results of the feasibility study. Where in the feasibility study, each system proficient of dynamic functionality was evaluated by the project team against various metrics covering: operational speed, power transfer level and suitability for different vehicle type. An assessment of technology readiness and manufacturing readiness was carried out. Currently the off-road trials are restricted to test areas, where regular drivers are not allowed.( http://www.highways.gov.uk/knowledge/publications/1614/ ) The trials are the first of their kind and will test the feasibility of technology, if it would work safely and efficiently on the country’s highways and major A roads, letting drivers of ultra-low emission vehicles to cover extensive stretches without requiring to halt and charge the car’s battery.

Highways England is also committed in the longer term to installing plug-in charging points every 20 miles on the motorway network as part of the government’s Road investment strategy: 2015 to 2020. The first ‘Road investment strategy’ (RIS 1) outlines a long-term programme for our motorways and major roads with the stable funding needed to plan ahead (Department for Transport Highways Agency)

The driving factor for this innovation was the G8 summit in 2008, where former British Prime Minister Gordon Brown publicised plans for Britain to be at the forefront of a "green car revolution". Mr Brown proposed that by 2020 all new cars sold in Britain could be electric or hybrid vehicles producing less than 100 grams of CO2 per kilometer (5.7 oz(CO2)/mi). Following that, the government is committed to supporting this growing market, as outlined in the DfT command paper ‘Action for roads’, where it states:

‘An important part of managing the road network over the next thirty years will be preparing the infrastructure for a shift to these new types of vehicle’.

Fortifying the same cause, the government is committed to support the growth in the market for ULEVs. The Office for Low Emission Vehicles is providing over £900 million between 2010 and 2020 to position the UK at the global forefront of ULEV development, manufacture and use. There is also a continued move towards the endorsing of wireless charging as an alternate to the EV plug in charging technologies in the UK. The government is committing £500 million ($779 million) to the project over the next five years. 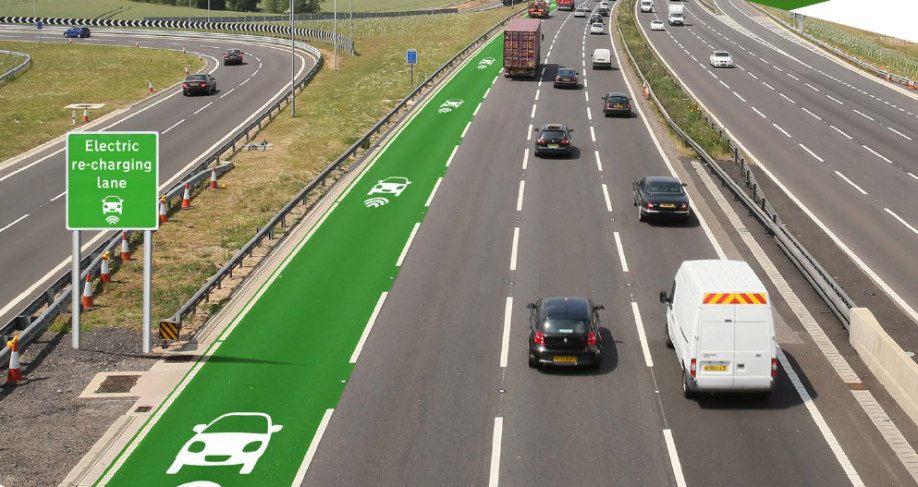 The popularity of electric cars in the UK has shot up over the last few years, with around 50,000 plug-in vehicles on the road, compared with just 3,500 in 2013. This huge increase in electric cars in 2015 has augmented because of a shift in the public’s approach towards electric cars and a persistently refining public recharging network. If this works for the highways of Britain, it just might revolutionize the game for long-distance EV travel. The off road trials of DWPT will help to build a more sustainable and reliable road network for England and engender new prospects for businesses.