The systems – commissioned by Exeter City Council for two of its largest city centre car parks – are the most complex solar project that SunGift has carried out to-date. SunGift, the Council and the various other technical specialists working on the project had to solve a significant number of technical challenges before the project could start.

Car park solar has been done before, but not like this. 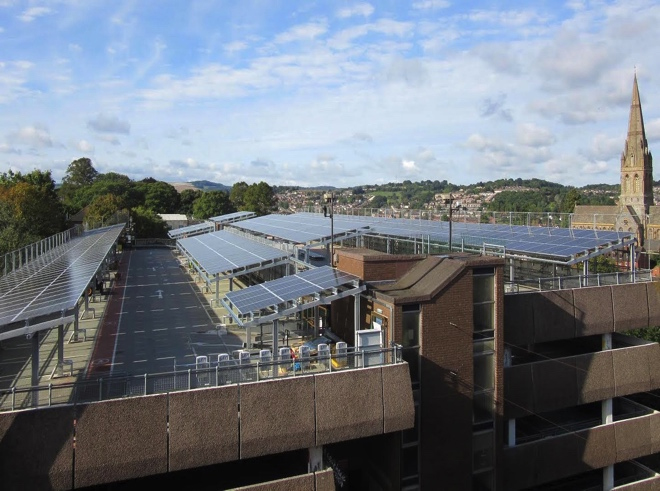 The solar carport projects have broken new ground, not only in the south west, but also nationally: 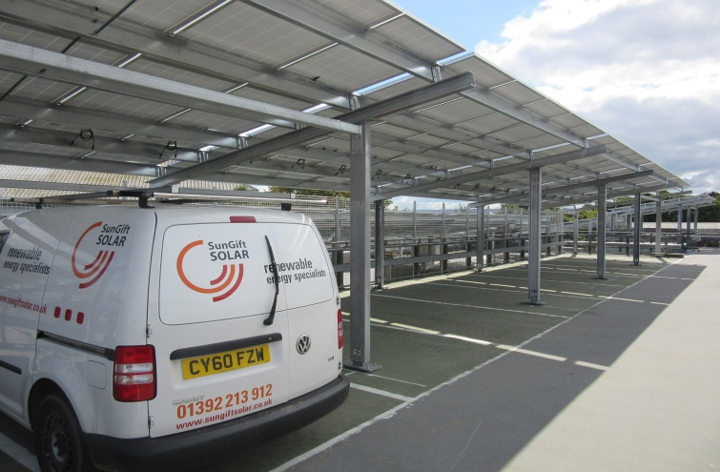 The project helps to demonstrate the benefits of solar PV to Exeter’s residents, businesses and visitors. There are many significant local benefits from this project, including:

There were a number of barriers to the project:

The solar carports will:

Save more than 150 tonnes of CO2 per year

The carports are part of Exeter City Council’s renewable and energy-saving programme, with the goal of delivering long-term financial and carbon savings as Exeter strives to be an ‘Energy Neutral’ Council. This is backed up by an innovative, financially-supported programme that is already producing substantial savings.

The Council’s target is to reduce its base-load energy consumption, deliver financial savings and a 30% carbon reduction within 3 years. This year the council has reduced its carbon emissions by 24% and by 2016/17 will have reduced its total electricity bill by 40%.

LED lighting has been installed in the Council’s city centre car parks, reducing electricity consumption by up to 65%, saving money, reducing maintenance, and improving the quality of the lighting. Also, the Council have installed electric vehicle (ev) chargepoints in the car parks, which are available for free public use. These will now provide ev charging from solar PV.

As far as we are aware, these are the first solar PV systems on carport frames on the top deck of multistorey car parks anywhere in the UK. It is a great example of where solar can be used to deliver numerous benefits and an exemplar that can help inspire and inform other similar projects elsewhere. It’s replicable locally, regionally and nationally.

The project has already led to enquiries from other councils and car park operators about similar schemes across the UK.

The project reiterates Exeter City Council’s position as one of the leading councils in the UK in terms of the low carbon agenda - generating clean energy, cutting CO2 emissions, saving energy, reducing bills and creating an independent source of income. As well as this project the Council has:

The project has been positively communicated: