Several states, especially those in the South Census region, have increased their electricity generation from biomass.

Fred Mayes for | Today In Energy 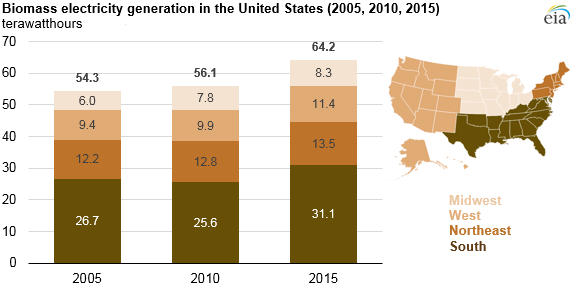 Several states, especially those in the South Census region, have increased their electricity generation from biomass. These states have ample forest resources, generally poor wind resources, and relatively unfavorable solar resources (compared to the Southwest), making biomass among the more readily available renewable energy resources in the region.

Virginia has a statewide program to convert coal plants to biomass, with several plants that converted during 2013. Three of these plants, each rated at 51 megawatts (MW) and operated by Dominion Power, are located in Alta Vista, Hopewell, and Southampton. The conversions to biomass are part of Dominion's commitment to achieve Virginia's voluntary goal of generating 15% of its electricity from renewable sources by 2025. Also in 2013, the Northern Virginia Electric Cooperative (NOVEC) commissioned a 50 MW wood waste biomass plant in South Boston, Virginia. In 2012, Miller-Coors Brewing also opened a biomass-based electricity plant in Elkton, Virginia, to dispose of brewing wastes. Finally, an industrial plant in Altavista switched from natural gas to biomass as its primary fuel and upgraded capacity to add wood solids to its fuel mix.

Increases in electricity generation from biomass in Georgia and Florida were each due primarily to a single new plant coming online. In Georgia, the 55 MW Piedmont Green Power plant began operation in 2013, fueled by urban wood waste and mill and logging residues. Georgia Power built the plant to improve its fuel diversity.

The western part of the United States also had notable growth in biomass between 2010 and 2015, increasing electricity generation from biomass by 15% over that period. Most of the growth in the West comes from a few large plants in California that are helping the state meet its renewable electricity target.