Unlike most rooftop systems, the 37kW array has been installed on the side of the building – a “solar wall” that will optimize the facilitys clean energy production and save money for critical community healthcare services.

New York City solar installation leader Quixotic Systems has designed an innovative solar solution in the heart of the Bronx at Urban Health Plan’s Simpson Pavilion. Unlike most rooftop systems, the 37kW array has been installed on the side of the building – a “solar wall” that will optimize the facility’s clean energy production and save money for critical community healthcare services. 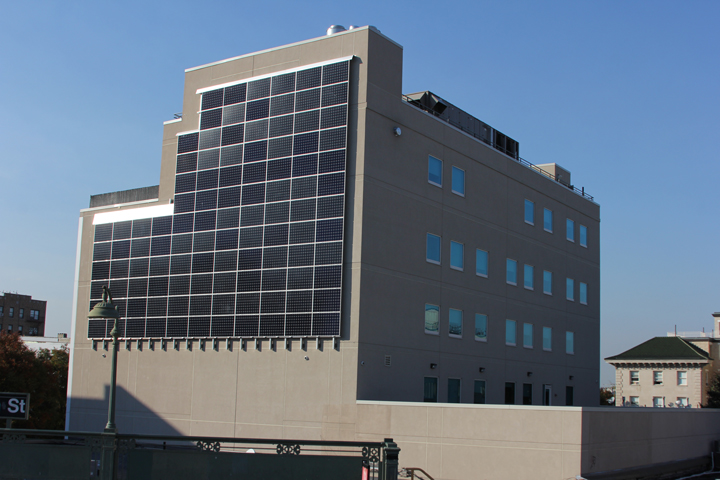 Urban Health Plan (UHP) is a network of community health centers based in the South Bronx and Queens. In 2014, UHP built the Simpson Pavilion, a state-of-the-art expansion facility, to expand and increase its services to patients in the South Bronx. The facility houses adult medicine, walk-in, pediatrics, behavioral health and OB/GYN departments as well as a gym for patients and a teaching kitchen for nutrition education.

The PV system designed and installed by the team at Quixotic foregoes limited roof space in favor of the Bronx building’s south-facing four-story façade. The high-efficiency array features 104 SunPower® 327 panels mounted on a custom vertical rack.

While the solar wall makes an attractive addition to the building, the system’s most distinct feature is that it is expected to perform best in the the winter -- unlike most PV installations, which typically generate more power during the summer.

“We’re a progressive organization, so everything we do – from providing care, to employing people to our energy efficiency efforts —we do the best we can,” said Paloma Izquierdo-Hernandez, president and CEO of Urban Health Plan. “Adding this distinctive solar system not only helps our environment; it saves money that we can put back into services for our community.”

UHP has a company-wide goal to reduce its reliance on fossil fuels as part of its mission to continuously improve the health of communities and quality of life of the people it serves. The solar installation will offset the center’s energy use by 10%, saving an estimated $230,000 over the next 25 years. The system is expected to generate 31,986 kWh of clean energy in its first year of operation, avoiding 24.8 tons of CO2 emissions annually – the equivalent of 54,000 miles driven in an average passenger car.

“The UHP installation represents the kind of creative solar solutions that can be designed for even the most urban environments,” said Gerry Heimbuch, vice president of Quixotic Systems Inc. “We are proud to be at the forefront of helping fight climate change and moving New York to a clean energy future.”

Despite its urban density, New York City has seen increasing installations of solar energy over the past few years. Across the five boroughs the number of residential installations has surged to nearly 6,000 in 2016 from less than 200 five years ago, according to the Solar Energy Industries Association. Rising electricity prices and plummeting costs for installing solar – together with attractive state and federal tax incentives -- have been largely responsible for the industry’s growth in NYC.

Simpson Pavilion is a 54,000-square-foot expansion facility is LEED-certified Gold for its many green- building features, including sustainably sourced and recycled building materials. The center is situated on an existing urban site in a densely populated area and has been built with highly efficient heating, cooling and lighting systems to reduce use of natural resources and cut greenhouse gas emissions. In addition to the solar wall, the facility features a “green roof” containing 2,000 square feet of plants to mitigate heat and reduce storm water runoff.

About Urban Health Plan Inc.
Urban Health Plan Inc. is a network of federally qualified community health centers based in the South Bronx and Queens that has served the community since 1974. Its facilities include nine clinical sites, ten school health programs, three part-time facilities and three administrative program sites. For more information: www.urbanhealthplan.org.

About Quixotic Systems
Quixotic Systems has been a leader in solar energy for the New York City area since its founding in 1999. Quixotic designs, engineers and installs residential and commercial solar systems that address complex architectural and engineering challenges. A designated installer for the community-based programs, Here Comes Solar and Solarize Brooklyn CB6, Quixotic is certified by NYSERDA and NABCEP for both solar thermal and solar electric (PV) installations, and is an authorized SunPower dealer. For more information: www.quixotic-systems.com.