The installed 840 floating PV panels have a total peak capacity of 220 kilowatts and is expected to generate 332 megawatts per hour in its first year – equivalent to the annual consumption of around 100 homes. 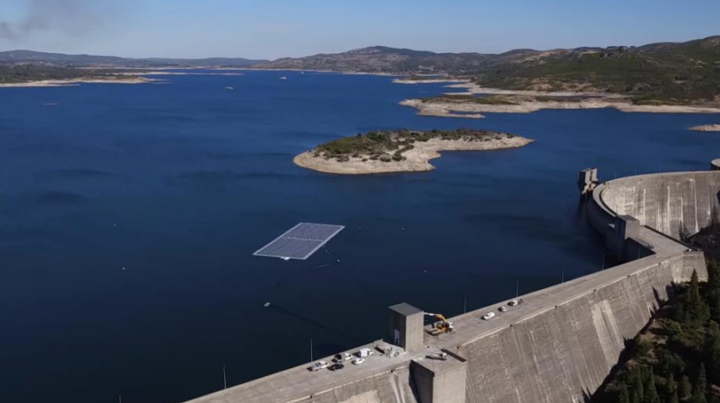 The French company Ciel & Terre (C&T) International – the pioneer of the FPV (floating photovoltaic) market through its floating solution Hydrelio® – believes in the many benefits of solar on dam reservoirs considering the tremendous existing potential worldwide. As a real alternative to traditional PV, FPV’s main concept is to generate energy on an unused and artificial body of water. So, by installing them on dams, it generates even more significant energy on an existing surface and is much more profitable. The hybridization allows the panels to produce solar energy during the day while saving hydro energy to complete during intermittent times. Thus, optimizing the water’s need valuation during the evening and peak demand times. Dam reservoirs are the targeted application for C&T considering the energetic and economic potential. It is estimated that in covering only 10% of the 50 largest dams in the world, C&T can produce 400 GW of solar electricity.

Ciel & Terre International is associated with the Portuguese company D2M-Energytransit, a specialist in the energy sector, distributing Hydrelio® in Portugal. Market studies proved Portugal was perfectly suitable for FPV technology. With this evidence, the hybridization benefits sparked the attention of the Portuguese leader within the electricity sector EDP (Energias de Portugal) Group, who manages a large number of hydroelectric facilities. The EDP Group’s acknowledgement on the advantages of FPV for its operation and the interest on making a pilot to prove it, led to the tender and ultimately to the connection with C&T. Chosen as EPC (Engineering – Procurement – Construction) contractor and the FPV expert, C&T oversaw all project development to ensure proper design and installation of the floating island along with the electrical and anchoring systems. D2M-Energytransit accompanied C&T throughout the entire process of EDP’s pioneer project on the Alto Rabagão. Assumedly this location was chosen by EDP Group amongst the several dams possible, for its extreme difficulty level. The most challenging issues were water level variation and the depth. Nonetheless it was undertaken with success by C&T and highlighted their expertise in mooring the floating power plant at more than 60 meters in depth, while dealing with a water level variation of 30 meters. In early 2017, C&T has delivered more than 60 floating PV installations in 16 countries, for a portfolio of over 140 MWp, making up the majority of the global FPV market.

The installed 840 floating PV panels have a total peak capacity of 220 kilowatts and is expected to generate 332 megawatts per hour in its first year – equivalent to the annual consumption of around 100 homes. The FPV power plant has been connected to the grid since November, 30th 2016, where an inauguration ceremony is planned to take place in the short term to officially announce the launch of this innovative project.

Ciel & Terre International is proud to equip the strategic Portuguese market with its Hydrelio® solution on the first floating PV system in the country. With strong policy in favor of renewables and sunshine duration of 2,500 hours per year, Portugal has high potential opportunities for FPV solutions thanks to the implantation of existing waterbodies that have a total hydropower capacity to 6 GWp. The partnership between all three entities (EDP Group, D2M-Energytransit and Ciel & Terre International) plays an important role in the worldwide energy transition process, as this project proves to be a compelling initiative to combine different kinds of energy production to generate more power in the same place without intrusion on valuable lands for other uses such as agriculture.

About Ciel & Terre International
Ciel & Terre (C&T) International is the manufacturer of the patent Hydrelio® floating photovoltaic mounting technology. While floating PV systems are relatively novel, the Hydrelio® solution is currently the most deployed floating mounting system worldwide, not least thanks to the extensive technical assurance work undertaken on its design. Born in France, the company manufactures Hydrelio® solution in 7 countries – Japan, China, the US, Brazil, France, Taiwan and South Korea – and distributes it worldwide. With 10 years’ experience, C&T offers a wide range of services from project development to FPV (floating photovoltaic) system design, installation and financing. After delivering more than 50 FPV installations by the end of 2016 equivalent to 60 MWp, C&T expects to increase this number to over 150 MWp in 2017.

About EDP Group
EDP (Energias de Portugal) Group is the largest generator, distributor and supplier of electricity in Portugal and has significant operations in electricity and gas in Spain. EDP is one of the major electricity generation companies and one of the largest distributors of gas in the Iberian Peninsula. EDP has a relevant presence in the world energy outlook, being present in 14 countries, with more than 10 million electricity customers and 1.4 million gas supply points and more than 12,000 employees around the world.

About D2M-Energytransit
D2M-Energytransit is a Portuguese company focused on Green Economy. Energy efficiency, renewables and Electric Mobility are the main vectors of its activity both commercial and in R&D. Portugal and CPLP countries (Portuguese Speaking Countries Community) is the main field of action. Floating Solar (Photovoltaics) has been the core interest for several years culminating in the bond with CTI.