Tracking is still relatively young -- the majority of deployments have really been in just the past few years -- but its growing up fast.

Tracking the Sun - A Growing Opportunity

Tell us about Sunfolding, how it got started and what prompted the company to take a different approach?

Sunfolding is a solar hardware company that got started in 2012. The co-founders, Leila Madrone and Saul Griffith, understood that to make solar ubiquitous it has to be more than just inexpensive: it has to be easy and scalable. They looked at where they could make an impact and quickly recognized a need in the solar tracking space. They realized everyone was using industrial era mechanical machinery to point solar panels at the sun as it moves across the sky and felt there was a better simpler solution.

Today trackers use motors and gearboxes with hundreds of moving parts and hundreds of wear surfaces, coupled to heavy steel structures. It is a complicated approach, and maybe not the best solution for something that needs to run reliably for 30 years in harsh environments like solar power plants do.

How is Sunfolding different than other tracking suppliers?

We’re different from other trackers because we’ve removed all the complex machinery and mechanical linkages and replaced them with industrial polymers and compressed air! And the technology is incredibly robust: compressed air systems are used in mission critical applications in multiple industries all over the world so we’re essentially borrowing from these other industries that can’t fail and need to last for decades -- think industrial lifting and suspension systems for trains and trucks -- environments that are even harsher than the ones typically seen by solar power plants. 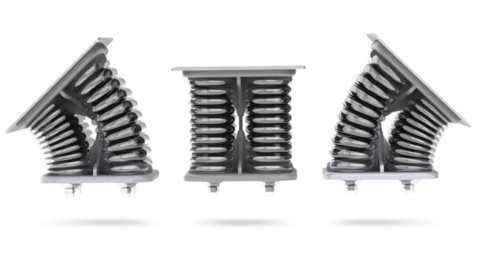 What are the biggest opportunities for tracking right now, and how does Sunfolding fit in?

In the time that Sunfolding got started, solar tracking has really taken off — most utility-scale ground-mount systems in the US now use trackers. It’s the fastest growing type of mounting, outpacing rooftop and fixed tilt. With the cost of solar panels and inverters dropping so quickly, there’s a lot of attention being paid to where the next wave of cost reductions will come from and Sunfolding has spent considerable time focused on this topic.

The most interesting opportunities in solar are around lowering soft costs and improving the overall customer experience. When it comes to building and operating a solar power plant, can we make the design process straightforward, can we make the construction easier so that jobs come online faster, can we make these systems easier to maintain? Sunfolding has thought about cost reduction at every stage of the project lifecycle.

And we’ve thought a lot about expanding into new markets. I think the future of solar WON’T be about building solar farms in perfect flat rectangles. Trackers that are adaptable to a variety of different sites and environmental conditions are going to be important: can a tracker be used on hills, fill in corners on oddly shaped sites? Sunfolding has developed a system that does all of that.

What are some of the biggest advantages of Sunfolding trackers versus other trackers? You said Sunfolding can reduce the cost across the entire project lifecycle - can you some examples?

The Sunfolding T29 is quicker to develop, faster to install and easier to maintain. We work on almost all sites, and we can fit more capacity onto each site. This is great for developers that want to lower their fixed costs and increase revenue.

We have fewer parts and half the installation steps compared to some traditional trackers, so construction crews go home earlier and the solar plant is up and running sooner. Our product team has spent a lot of time on job sites watching construction crews build solar plants and they understand how the tracker hardware has cascading impacts on constructability. They recognize that each component adds another layer of complexity to the logistics and the chance for mistakes in the field gets compounded. So an example of how that translates to our tracker: there are only 2 bolt sizes, both of which use off-the-shelf drivers you can get at any hardware store. As a result, our tracker is very easy to assemble in the field. It’s so easy that I’ve assembled one myself and I don’t have an engineering or construction background.

Can you talk about your team’s experience have in solar tracking industry?

Our team has collectively built and sold GWs solar, so we have a very grounded understanding of the solar industry and tracking space. I spent 7 years leading regulatory efforts and strategic initiatives at Vote Solar working to create many of the markets where Sunfolding now has an opportunity to sells its products.  Matt Schneider, our VP of Product co-founded Raytracker, which was the tracker company acquired by First Solar in 2011. On the sales front, we have Aaron Thurlow, a solar industry veteran, who has successfully launched new products and technologies globally at companies like SunPower, National Semiconductor, and Silevo. As a company, the majority of our folks have solar experience prior to Sunfolding.

Where do you see the Solar Industry and solar trackers over the next 5 years and how will Sunfolding fit into this?

Tracking is still relatively young -- the majority of deployments have really been in just the past few years -- but it’s growing up fast. Where almost all ground-mount systems >1MW in the US are now using trackers, it’s still mostly fixed tilt around the world. We expect this to change as international solar markets start to embrace tracking. We believe in analysts forecasts for a 40GW market globally for trackers by 2021! By comparison, the total US solar market in 2016 was 15 GW, and that was double what it was in 2015.

Sunfolding is focused on the US market this year with international expansion next year. We are building the foundation to scale to be a global leader in the tracker space.

About Gwen Rose
Gwen Rose has more than a decade of operations and business development experience, responsible for budgets and business strategy on government and foundation funded renewable energy projects.  Prior to Sunfolding, Gwen was Director of Operations and Strategic Initiatives at Vote Solar.  She has worked on legislative campaigns and regulatory proceedings to establish community solar programs, net metering and interconnection rules, and solar-friendly rates via utility general rate cases in states across the country.