Beyond the economics, beyond the savings, beyond the ROI (return on investment), which we also considered, what we consume and how we consume it is very important to us – having less of an impact on the environment versus a traditional home.

Bloomington, Indiana isn’t your typical hub for solar energy. But for one local family seeking to create an super-energy-efficient home by reducing their carbon footprint, it’s ground zero. Karim Abdelkader and his family sought to minimize their impact on the environment and maximize energy efficiency; their extensive research led them to choose solar panels from LG Electronics to be installed on both their home and adjacent pool house. The home and pool house span over 4,000 square feet, and the Abdelkaders wanted the solar panels to produce enough energy for both structures and the pool itself. Because the panels represent an investment for years to come, Abdelkader wanted to maximize this investment and be assured the panels would be able to withstand the variable weather conditions typical in central Indiana. What’s more, he wanted to install panels that would blend well with his home’s premium appearance. 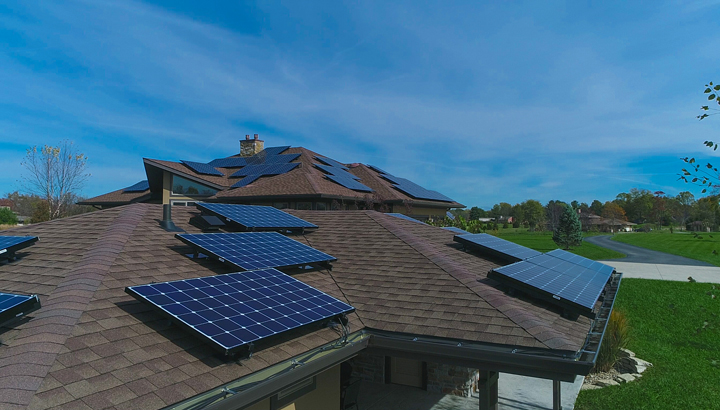 "We wanted to not only cover the home, but to ensure the pool and pool house were offset with the sun’s energy – the LG NeON R product provided that."
KARIM ABDELKADER, HOMEOWNER

The solar panels needed to be highly efficient, cost-effective, reliable and durable, says Abdelkader, adding: “We wanted to not only cover the home, but to ensure the pool and pool house were offset with the sun’s energy – the LG NeON R product provided that.” The climate in Bloomington varies season to season, and Abdelkader needed the panels to be able to withstand both extremely hot and cold, snowy conditions. “Being in the Midwest, they’re getting exposed to all sorts of extreme conditions – from high periods of heat to cold to snow, and that was a consideration and driver behind the decision that we made.” Abdelkader also wanted peace of mind, a manufacturer that would stand behind its solar panels for years to come. “That was a key driver behind the decision… what does the warranty look like?” The LG NeON R has a 25-year warranty, which is “very attractive and one of the highest I saw in the research I conducted,” he says. Abdelkader’s goal was to offset his energy usage by 80 percent for his home, pool house and pool.

After some in-depth research and consulting with leading local solar expert Alex Jarvis, President of Solar Systems of Indiana, to discuss his options, Abdelkader decided to install 58 LG NeON R panels to maximize the power output and cost-effectiveness.

The LG NeON R is ideal for the residential market as it produces 365 kW per hour compared to other residential panels that typically produce 350 kW per hour. Given the higher energy quotient, the LG NeON R panels can achieve the efficiency goal of offsetting energy by 80 percent despite the limited roof space available in this project.

Addressing Abdelkader’s concerns about durability and reliability, Jarvis explains the LG NeON R offers a 25-year labor and materials warranty that covers the panel if there are any issues. The warranty further ensures long-term stable operation, with a guarantee of at least 87.0 yield relative to initial performance after 25 years. The panels are also low maintenance, only requiring occasional routine cleaning. Looking ahead, the 25-year warranty backed by LG was a key factor of consideration for Abdelkader and Jarvis.

Both felt confident that the warranty would be backed in years to come, as LG is large, diversified company. Jarvis says, “We started using LG about three years ago; they’re a great balance between efficiency and value. I really like that LG is a globally diversified company. It’s a very stable and secure company that lends itself to an installer to put up equipment that we know will be out there and will have support and project backing moving into the future.”

The NeON R has a black backing and seamlessly blends with the roof line of the existing structures, maintaining the aesthetic appeal of the home.

Construction was completed in October 2017 with the system expecting to yield an estimated 26,250kWk/year. The installation was completed mid-month, but Abdelkader already saw his full month energy bill cut in half. Bloomington’s net metering arrangement also allows Abdelkader to receive financial credit for the excess energy he harvests through the LG NeON R and puts back on the local electrical grid. This will further help offset the cost of installation.

Jarvis states, “Here in Bloomington we have a net-metering arrangement… as the system harvests more and more kilowatt hours he’s able to offset what he would have paid by getting the same rate on utility. The first month, Karim sent me a text and was very excited about how low his energy bill was. Even without a full month of being energized the system has offset quite a bit… solar has met his expectations, and then some.” 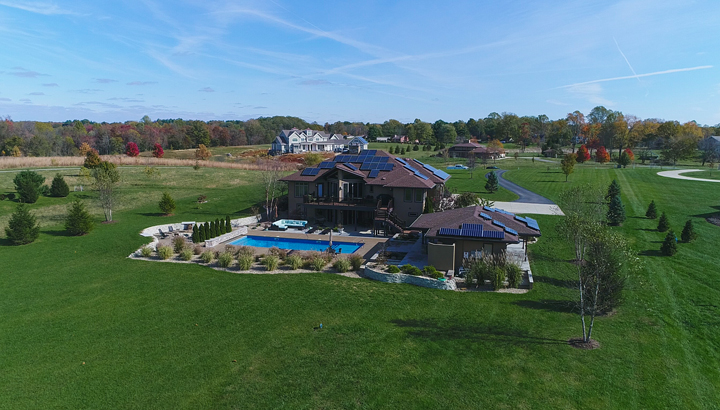 “Beyond the economics, beyond the savings, beyond the ROI (return on investment), which we also considered, what we consume and how we consume it is very important to us – having less of an impact on the environment versus a traditional home.” Abdelkader concludes. “I’d absolutely recommend the LG NeON R 365kW panels because in my opinion, they’re going to give you the biggest bang for your buck… A few words – quality, reliability and overall performance – and that includes degradation profile. We wanted something that would last and withstand the test of time, and that’s why we ended up choosing LG Solar.