Researchers have taken a key step toward helping wildlife coexist more safely with wind power generation by demonstrating the success of an impact detection system that uses vibration sensors mounted to turbine blades.

Corresponding author Roberto Albertani and collaborators at the OSU College of Engineering and the College of Earth, Ocean and Atmospheric Science’s Hatfield Marine Science Center have created an integrated sensor system that can tell if a bird or bat hits a turbine.

The system can also determine what species was involved in the collision.

“If a turbine strikes a generic bird, sad as that is, it’s not as critical as striking a protected golden eagle, which could potentially trigger down time in turbine operations and losses in revenue, and most important the loss of a member of a protected species,” said Albertani, Boeing Professor of Mechanical Engineering Design at Oregon State University.

The U.S. Fish and Wildlife Service estimates there are roughly 143,000 bald eagles and 40,000 golden eagles in the United States. 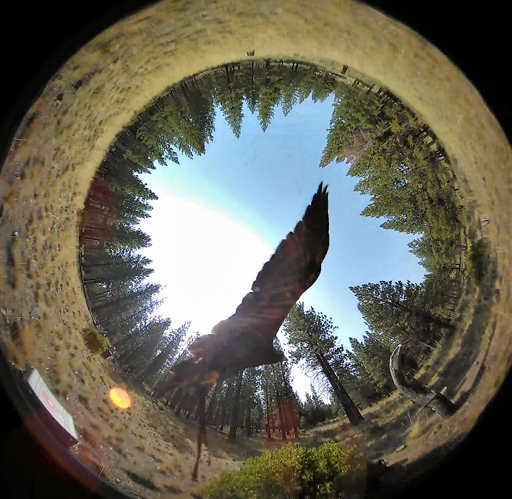 A growing energy source in the U.S., wind power uses towers up to 300 feet tall typically equipped with three blades with wingspans double that of a Boeing 747. At their tips, the blades are moving close to 200 miles per hour.

“At land-based wind farms, carcass surveys and long-term visual monitoring have been the typical ways of assessing collisions and mortality rates,” Albertani said. “Factors like surveyor error and carcass removal by scavengers can make the data inaccurate. And carcass surveys are expensive or not feasible at remote locations or other sites like agricultural fields, dense shrub habitats, or in offshore turbine operations.”

The research by Albertani, College of Engineering graduate student Congcong Hu, and Robert Suryan of the Marine Science Center’s Department of Fisheries and Wildlife tested a conceptual design of a system that auto-detects collisions. The system features a vibration sensor at the base of a blade, an acoustic sensor on the generator housing to pick up bird sounds, and an optical camera on the tower base.

“General results from 29 field tests with blade strikes showed positive detection and confirmation 14 times,” Albertani said. “Likely the impacts not detected were low-energy events. It is strongly believed the success rate can be significantly increased.”

Most of the detected strikes, he noted, occurred at the leading edge of the blade halfway between the blade’s midpoint and tip.

“A result of great interest was the capability of detecting a strike by any of the sensors installed on the three blades, an indication that not necessarily all of the blades of a rotor need to be equipped with sensors to detect impacts,” he said. “This study demonstrates the feasibility of an impact detection system based on vibration sensors.”

The U.S. Department of Energy supported the research. Findings were published in Wind Energy.

The department’s Office of Energy Efficiency & Renewable Energy is supporting Albertani on a related project to detect and deter approaching eagles as well as determine if a blade strike has occurred.

Albertani is working with Sinisa Todorovic, associate professor of computer science at OSU, and Matthew Johnston, assistant professor of electrical and computer engineering, on what they hope will be a major breakthrough in a safer-for-wildlife expansion of wind energy worldwide.

The idea is that a computer-connected camera would determine if an approaching bird is an eagle and whether it’s flying toward the blades. If both those answers are yes, the computer would trigger a ground-level kinetic deterrent: randomly moving, brightly colored facsimiles of people, designed to play into eagles’ apparent aversion to humans.

When a vibration sensor detects a thump, recorded video data from the camera could be examined to tell if the impact was caused by an eagle or something else.

About the OSU College of Engineering
The OSU College of Engineering is among the nation's largest and most productive engineering programs. Since 1999, the college has more than tripled its research expenditures to $37.2 million by emphasizing highly collaborative research that solves global problems. It is a leader in signature research areas, including precision health, clean energy, resilient infrastructure and advanced manufacturing; and targeted strategic areas, including robotics, materials research and clean water.