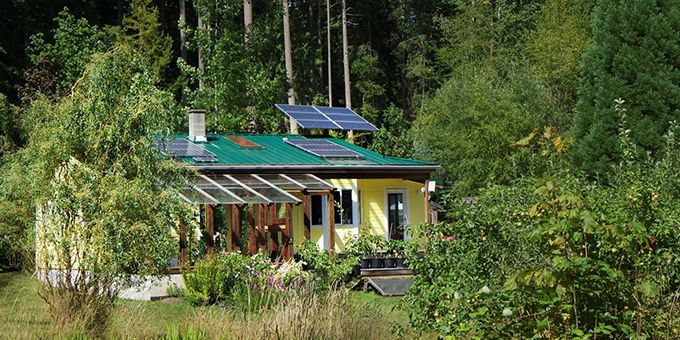 Melinda and Ezra Auerbach began living off grid on Lasqueti Island in the 1970’s. Since then, their lifestyle has literally evolved from kerosene and candles to dishwashers and Wi-Fi. Their journey is similar to thousands of other early PV adopters with the exception that they are also PV industry pioneers. They started their first solar business in 1986 and have been active in the industry since then. A result of this ongoing activity is an electrical system that is ever evolving and up to date.

There are a number of buildings on the homestead, so Ezra and Melinda decided to adopt an AC coupled micro-grid approach for their current iteration of the electrical system. The “grid” is serviced by SMA Sunny Island and Sunny Boy inverters. There are additional DC coupled PV inputs, that are managed by Morningstar Charge Controllers and a backup generator covers the PV deficit in the winter months where the system supports a 6 to 10 kWh daily load. Ezra explained, “Our loads are larger than average. We use a lot of power keeping the internet up all the time, have large draw appliances and in addition to supporting our own refrigeration needs we also provide power for two neighbors freezers. The load varies so much because we try to use electricity to cook and heat water as much as possible during the summer months when sunshine is abundant”.

In May 2017, the Auerbachs installed a 390 A/h (18 kWh usable to 90% DOD) Discover AES (Advanced Energy Systems) Battery Bank. It replaced a 750 A/h flooded lead acid battery (18 kWh usable to 50% DOD). Ezra stated, “We have always used lead acid batteries, and they have proven to be reliable, although their charging and discharging efficiency is low which really adds to system losses. The 60 to 65% two-way efficiency we typically see with these batteries is really noticeable when PV resources are scarce or when we are running the generator.”

A battery replacement was due before the winter of 2017/18, the existing bank had been through thirteen winters and while still working well, their capacity had visibly diminished.

Melinda quoted, “I was cautious and a bit dubious about making the switch to AES batteries. I knew we were going to need new batteries and I assumed we’d replace them with the same ones which had provided such good service to us”. It took a bit of convincing on Ezra’s part, and the deal they agreed upon was that the new batteries could be installed but the old ones had to stay behind.

“I can’t count the number of different inverters, charge controllers, and meters he’s tried out over the years, but the batteries are mine, I look after them and they keep everything running. I wasn’t anxious to risk any loss of power to ‘new technology’. As usual it was the human connection that gave me the confidence to let him install them” Melinda explained.

Melinda learned that Discover, that makes the AES, was based close by and had senior employees that have extensive experience with the unique demands of off grid residential application. “Knowing that people that I’ve known for decades were supporting these batteries helped a lot. They know perfectly well, how critical keeping the lights on are for us.”

The AES batteries installed at the Auerbach residence have a two-way efficiency that is over 95%. The increase in charging efficiency was most notable to Ezra and Melinda. 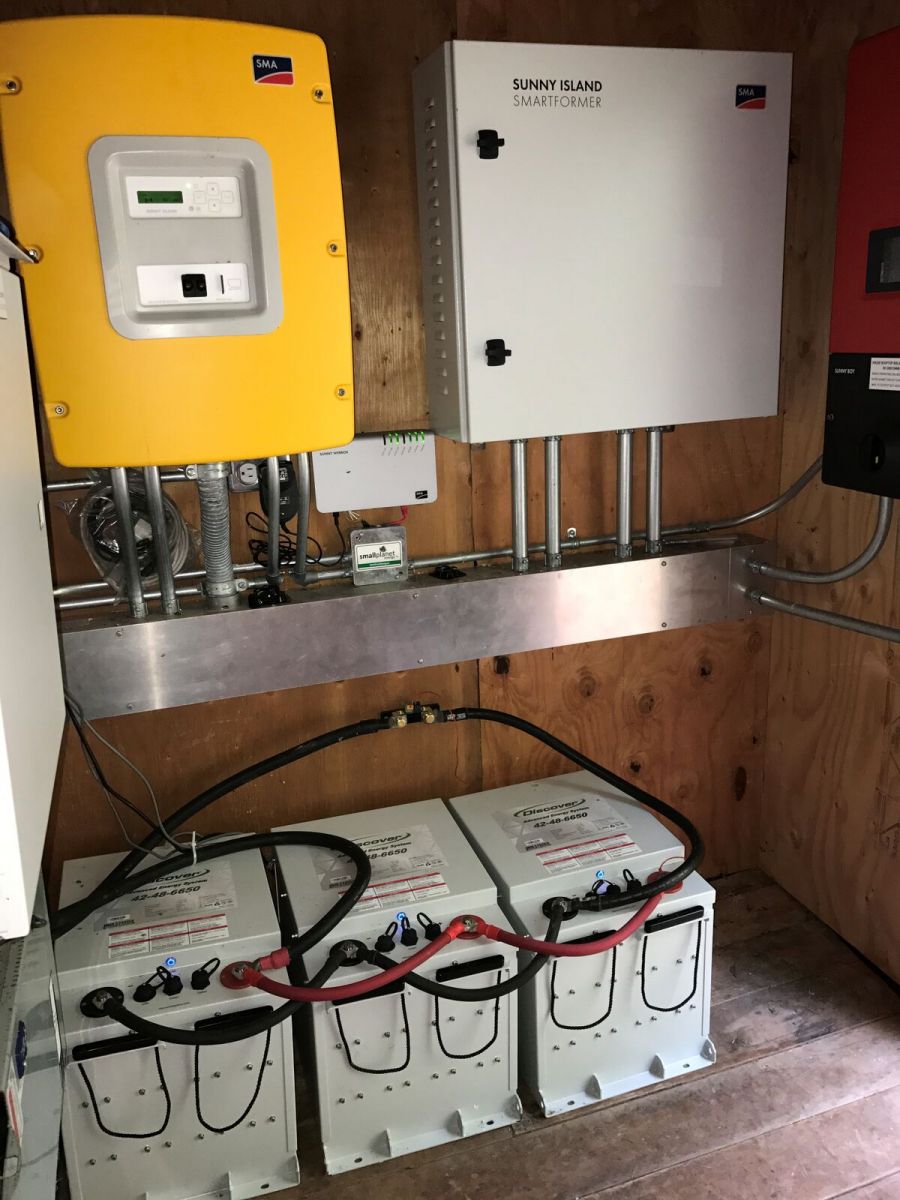 “The increase in charging efficiency was so evident that it was like discovering MPPT all over again.” Ezra claimed. They also noticed another significant change in system behavior, which is the stability of operating voltage range of the AES batteries. Melinda added, “I was used to seeing as much as a 10-Volt swing with the old batteries, the voltage barely changes on the new ones, even when I turn on the toaster and coffee maker at the same time.”

It didn’t take very long for Melinda to gain confidence in the AES batteries, one month after they were installed she agreed to have the old batteries removed from the shed. “We’d been through a bit of cloudy weather and I could see how much better they performed than the old batteries.” She also appreciated that there were three batteries, each of which was 48V. “For me that really lowered the likelihood of catastrophic failure. All three batteries breaking at the same time seems pretty unlikely.”

Previous to the installation of the AES batteries the automatic generator control was managed by the SMA inverter. Ezra explained “Most of my life I’ve managed generator operation manually. This means, look at the meter on the wall, go out start the generator, come in, wait a few hours, look at the meter some more, go back out and turn it off. It works well but has its limitations, particularly on cold stormy nights.” A few years ago, Ezra was helping automate the generator starting for the local health centre. They had the same SMA Sunny Island inverter as he did, so he was determined to learn how the system worked. “The only thing I could do was to use my system as a test bed so I hooked up the auto start from the inverter to my diesel generator.”

It didn’t take long for Ezra and Melinda to begin to truly appreciate the benefits of having the generator start and stop on state of charge parameters. Melinda stated “It actually worked much better than I expected and it makes going away in the winter a bit easier, knowing that the generator will start if the batteries get too low.”

Ezra then went on to say “The Sunny Island is a great inverter charger, but like most products of its kind, the battery state of charge values are approximations, rather than calculated. Therefore its not uncommon to have erratic generator stops and starts.

The AES batteries installed at the Auerbach residence have three communications ports. They provide a variety of ways to access detailed battery information including the actual state of charge. Using his laptop computer, Ezra is able to make direct connection with each battery. This allows him to look at each battery individually, for detailed real time and historical performance information. The Auerbach batteries have the Xanbus communications network protocol enabled which allows them to see their performance as a single battery bank.

The SOC input for the AGS comes directly from the AES batteries. This is one of the most notably different features for Ezra. “To have a battery that is capable of ‘feeding itself’ by starting and stopping the generator without any external guess work is a game changer. It’s more or less like having an autonomous battery”.

At the end of September 2017, the Auerbachs wanted to put the AGS to the test. With winter approaching, they needed to be sure that the system would work as they expected. They have the automatic generator start threshold set to 40% SOC. “I understand that we could take the batteries to a much greater depth of discharge, but I prefer to keep a healthy reserve of power just in case something goes wrong. The generator could not start, the fuel barge could be stuck in bad weather, any number of things like this can and do happen. That’s why I don’t like to go to empty,” Melinda stated.

It took a couple of rainy days in a row and some extra cooking and dishwasher action to bring the batteries low enough to trigger the auto start. “It worked perfectly”. Stared Ezra, who went on to explain, “The batteries reached the 40% SOC threshold sometime during the night but because we have quiet time set to end at 8:00 a.m. the generator did not start until then. At exactly 8:00 the generator started, it ran until the batteries had reached 60% SOC, our generator cut off point, and turned off.”

“I am so thrilled to have the AGS controlled directly by the batteries, finally a system that doesn’t depend on guess work to determine SOC values”.

Since the batteries have been installed the things that have impressed the Auerbachs the most are; efficiency, voltage stability, and communications. “We are used to having our inverters and controllers on our local network so we can monitor their performance but it’s amazing to have the batteries on the network too. I really like getting SOC information that I can really count on” shared Ezra.

One of the characteristics of AES batteries is their charging profile, unlike lead acid batteries they do not require a lengthy absorption cycle. Ezra and Melinda are expecting that the combination of higher efficiency and no absorption cycle will result in considerably reduced generator hours over the coming winter.

“As we move into the dark rainy season we are seeing that our expectations of lower fuel costs are being borne out. We are very happy with all aspects of these batteries so far and saving us some diesel dollars is truly icing on the cake,“ Ezra mentioned.

As a closing note, Ezra explained that he wrecked another favorite shirt moving the old lead acid batteries out of the shed. “Hopefully that’s the last one ever.”