Given how well the industry has weathered the solar tariffs enacted by the Trump administration in early 2018, and how the costs to install just keep falling, it seems certain that solar is ready for its moment in the spotlight. 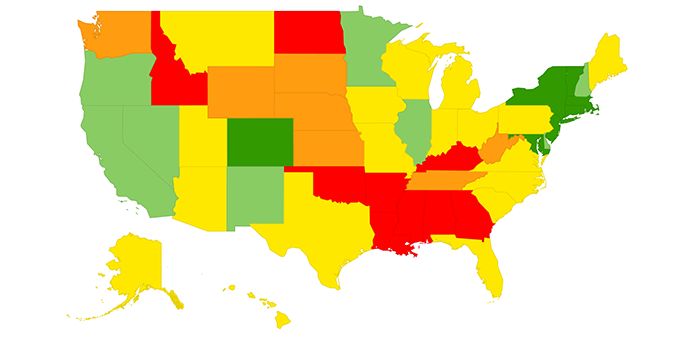 Well folks, it’s time for another roundup of the best states for solar (and the worst), with a rundown of an entire year of solar policy in the good ol’ USA, as well as some pontificating about the coming year. First, and most importantly, this year represents a milestone for the solar industry, because 2019 is the year the 30% Federal Tax Credit for installing home solar will end.

Now we don’t say that just to spook you, and it comes with the caveat that the ITC will still exist in 2020 and beyond, albeit at a lower rate of reimbursement. No, we say that because this really is the beginning of the test we all knew solar would face some day: whether, given an adequate runway of broad government support to spur innovation and greatly reduce prices, solar can stand on its own.

We’re seeing signs that solar will pass that test with flying colors. In fact, given how well the industry has weathered the solar tariffs enacted by the Trump administration in early 2018, and how the costs to install just keep falling, it seems certain that solar is ready for its moment in the spotlight.

If there are two things 2018 will be known for by future solar historians, it’ll probably be the nation’s first new-construction solar mandate and the consequences of the general election. The former will set the tone for all thoughtful states and cities, and has already inspired work in other places as surprising as Milwaukee, Wisconsin.

As for the election: before the voters cast their ballots, we did a write-up on some of the races we were watching closely, and though the body politic saw fit to elect only one of the most consequential candidates we listed (Steve Sisolak of Nevada), the consequences of the election may still have a positive impact on the growth of solar across the USA. A new study by Environment America shows that installing solar panels on all newly-built homes would result in a tripling of the amount of solar in the USA by 2045. We’re all for it.

No less authority than Wood Mackenzie Power and Renewables predicts that the governors elected in 5 states—Illinois, Nevada, New Mexico, Colorado, and Minnesota, will have an enormous impact on the amount of mandated solar in their state. Already, Colorado governor-elect Jared Polis has discussed the possibility of setting a 100% RPS goal for his state, and Steve Sisolak was elected on the same ballot as a successful initiative that aims for 50% renewables in Nevada.

Given the level of support for solar that exists among voters nationwide, it seems likely the US House and some state executive branches will be leading the way on crafting smart new mandates for renewable energy. Expect to see lots of news in 2019 and beyond about the Green New Deal, backed by at least 18 incoming members of congress and others already seated.

Of course the flip side of these successes are states like Georgia and Florida, where pro-solar candidates narrowly lost, and Arizona and Washington, where residents rejected a new renewables mandate and a carbon tax bill, respectively.

Other big solar stories of 2018

A lot happened this year, but perhaps nothing was more impactful than the results of solar incentive offerings. Here’s a quick rundown of what’s been going on:

These and more solar incentives in states all over the country are major drivers of new solar business, and that means new small businesses, jobs, tax revenue, and all the other good things that come along with an expanding economy. Strange then, that so many of the sunniest states (looking at you #50-51 Louisiana and Alabama) seem to have such trouble mustering legislative support for the bright, clean future.

It’s 2019, and the state of the Solar Power Union is… not as strong as it should be.

Installing home solar in any of the states with grades of B or better should be easy as pie and a sure thing, financially speaking. For everywhere else, it’s hit-or-miss. Some states get C grades and still manage to have decent payback, either because they get so much sun or because their electricity is more expensive.

But the grades C and below mean something—usually that the government doesn’t have its citizens’ backs. What we mean by that is, if you live in a state that gets a C or below (especially below), you might have a decent experience getting a solar system installed, but you can’t be sure the government won’t change the deal eventually.

That could mean the credit you earn from the utility company for excess solar sent to them could go down, or the property tax exemptions that exist now could end. Basically a C grade is indicative of a state with a shaky foundation of commitment to renewable energy. If a state is serious about supporting solar power, you’ll see at minimum a good RPS law and strong net metering rules.

Only one state in our rankings earns a C with a good RPS law, and that’s Maine, which offers no incentives or tax exemptions, and has been fighting a pitched battle over net metering for the better part of three years. We’re actually hopeful that Maine will improve soon, under the leadership of its new governor. Time will tell.

The bottom line is there are too many states that have too little regulation protecting consumers who want to install solar panels. With a little push in the right direction to indicate some ongoing support, we could see many of these middling states become solar power superheroes (looking at you, Florida, Arizona, South Carolina, and Georgia).

What to look for in solar power during 2019 and beyond

Well, as we said above, 2019 is going to be all about the end of the 30% Federal Solar Tax Credit. You’ll hear about it from us and others in the solar industry, but expect think-pieces from the larger media, as well. One bit of good news on that front is the Trump solar tariffs also begin their gradual reduction, and prices will continue to fall, so the effects of the end of the ITC will be muted for at least a year or two.

As for other predictions, again, a good place to look is state incentives. Illinois has a huge new direct-payment incentive that awards cash to solar system owners based on their systems’ expected energy production. That will be a game-changer in a state that has held back from some of the big-dollar incentive programs we’ve seen in similarly progressive places. NJ will likely hit the 5.1% threshold that signals the end of SRECs there before 2021, and that may mean a scramble there.

And now let’s circle back to where we all began: the 2018 elections. Look for the progressive wing of the Democratic party to really push its Green New Deal. They probably know they won’t get any of what they want in 2019, but if they get the broad strokes right and drum up some widespread support for their ideas, the GND could be central to messaging for many progressive candidates in 2020.

Governors will have a major say in how 2019 affects the solar landscape. If we see some staunch support from state Executives in key places, we could be looking at a U.S. map with 10 or more states angling for 50%+ renewables in just a couple decades, up from 6 right now. That kind of leadership could eliminate the worries about the ebbing ITC, and lead to a national landscape where a Green New Deal seems inevitable.