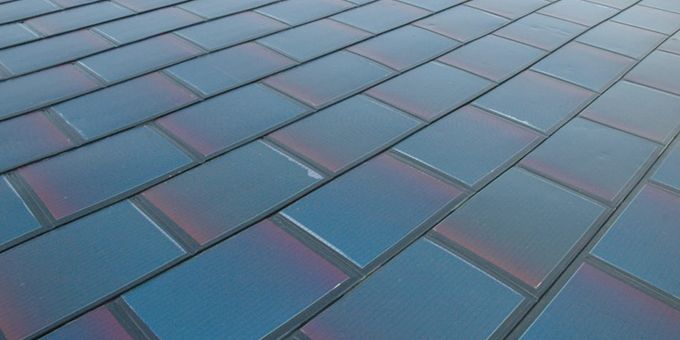 The idea of a solar shingle was originated by DOW Chemical Company, who introduced the shingle back in 2009. The shingles were intended to look like a typical asphalt roof.

DOW used Copper Indium Gallium Slenide solar cells, which capture the rays of the sun and convert them to electricity, before transferring the energy to an inverter box, and from there into the home. The problem was that the product failed to catch on as well as DOW expected. The DOW shingle was only installed on 1,000 homes. DOW discontinued the line.

Tesla joined the game in 2016 with a $2 billion acquisition of Solar City. CertainTeed and Atlantis Energy Systems tried to take over the industry, but Tesla became the major player in the solar shingle game.

The Tesla solar roof has a remarkable layer of protection, compared to the average roof. Tesla bombarded their roof shingle with a 2-inch ball of hail traveling at 100 mph. The solar roof survived the impact flawlessly, whereas traditional roof tiles shattered like glass. Tesla tiles come with a lifetime warranty. Traditional solar panels are just as durable, so Tesla shingles do not have an advantage over solar panels.

To give you a rough idea of the cost comparison of a Tesla roof to an asphalt roof with solar panels, we’ll look at a typical scenario, using a 3,000 sq. ft. home in Southern California with a $200 monthly electric bill as an example. The costs in other states should be similar.

This scenario is for the replacement of a worn-out roof, but may also work if a new home is being built, and the roofing material hasn’t been selected. A home owner has the option of either replacing the roof first and then installing traditional solar panels, or installing a Tesla solar roof.

A new asphalt shingle roof and solar panels will cost $34,080 and pay for itself in five years, whereas a Tesla roof will cost $50,950 with only 30% of the tiles producing electricity. The Tesla’s solar roof will only produce about three fourths of the electricity that traditional solar panels produce, and it would take 15 years to break even. A system with 50% solar producing tiles would cost $79,500 and take 12.5 years to pay for itself.

CertainTeed is another solar company that has high efficiency singles, which compare to that of conventional solar panels. Like SunTegra shingles, their shingles require an existing roof for installation. Their cost is similar to SunTegra.

Solar windows are manufactured by sandwiching existing solar panel cells between two layers of glass. The solar cells are visible, but the human eye passes over the cells when a person looks out the window.

Building owners can modify their existing windows by installing a film on the inside surface of the glass. The film is made from organic materials, such as carbon, nitrogen, hydrogen, and oxygen. These are applied in liquid form to a stabilizing layer. The coatings are applied in liquid form at ambient pressures and dried at low temps, which gives them their transparency. This results in a clear solar paneling. The coatings can be put on to any conventional glass or plastic. They have a warranted life of 25 years.

SolarWindows Technologies, Inc. is developing first-of-its-kind electricity-generating see-through windows for detached homes and commercial buildings. They claim that they can use natural, shaded, or even artificial light to produce energy, which means they can be used on all four sides of a building instead of just on the roof.

SolarWindow™ coatings use an organic photovoltaic solar array using ultra-small solar cells, which are fabricated using hydrogen-carbon based materials. They convert light energy into electricity using the photovoltaic effect. When interconnected in a grid-like arrangement, an array of these cells increase the voltage potential and electrical current. The company is developing a proprietary solar coating to generate electricity on glass and flexible plastics, while keeping the glass see-through. 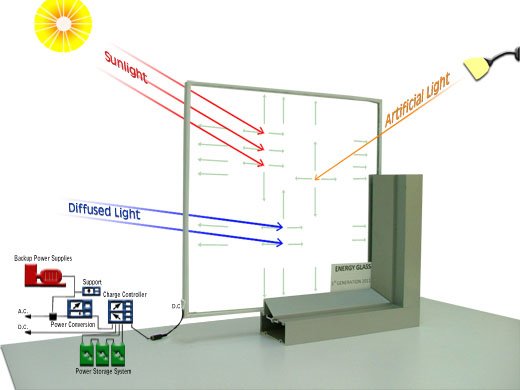 The best use for solar windows is in crowded urban areas because of the large vertical window space and the absence of rooftops for solar panels. Solar windows would help balance peak energy demands. These films can be added to windows, generating less waste while upgrading regular windows to solar windows. Photovoltaic films are lightweight, meaning there’s less energy required for their manufacture and transport.

Currently, solar windows are presently in the embryonic stage. There are only a few companies that are actually manufacturing them. Their efficiency is low while their cost is high. Solar windows will run approximately 40 percent more than standard windows.

Solar windows are perfect for big commercial buildings, which have a lot of flat, open space. The technology hasn’t caught on yet in the residential market.

EnergyGlass uses a patented inorganic nano technology (quantum dots) to create transparent solar windows without any visible lines or dots. Their window system produces continuous energy from sunlight, diffused, and ambient light and it’s the only 100% field of vision in the world. The entire surface of the windows is clear.