More powerful wind turbines are driving down cost of offshore wind power and helping to drive strong growth in US and globally, creating up to $70 billion in economic development activity in US. Blade for GE’s Haliade-X 12MW offshore wind turbine to be tested at Wind Technology Testing Center to simulate full lifetime of blade. 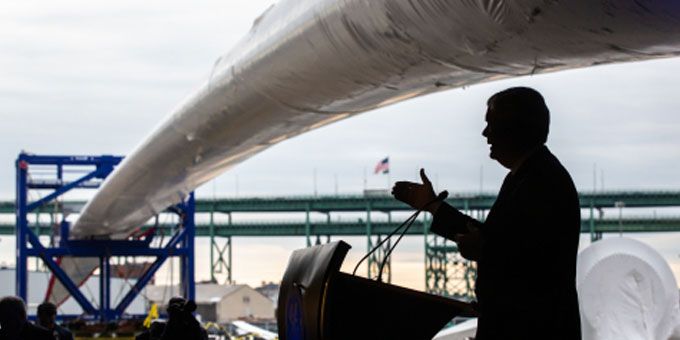 GE Renewable Energy and the Massachusetts Clean Energy Center (MassCEC) today announced the arrival of a blade that is part of the most powerful offshore wind turbine in the industry at MassCEC’s Wind Technology Testing Center (WTTC) in Boston. The 107-meter blade will undergo a series of fatigue tests that involve moving it millions of times over the period of a few months to validate that it can withstand more than 25 years of operation at sea. The testing is part of the process of commercializing GE’s Haliade-X 12MW turbine -- the most powerful in the industry -- by 2021, strengthening the company’s ability to compete in a market steadily gaining momentum in the U.S. and globally.

“This has really been a collaborative effort on the part of the company to be part of solving the challenges associated with the energy transition," said GE Chairman and CEO H. Lawrence Culp, Jr. "We think the Haliade-X is the right turbine at the right time as the offshore industry globally and particularly here in the U.S. is poised to take off. We're proud Boston is part of this effort, and we appreciate the work the Commonwealth has put forth in laying out the roadmap by which Massachusetts can be a leading developer and user of offshore wind technology."

“The arrival of General Electric’s innovative wind blade technology in the Commonwealth signals Massachusetts’ continued leadership in the emerging U.S. offshore wind industry,” said Governor Charlie Baker. “Offshore wind represents an important energy source as the Commonwealth works to meet ambitious greenhouse gas reduction targets, and we look forward to working with the industry to drive down costs, improve efficiency and develop of a hub of activity here in Massachusetts.”

John Lavelle, CEO of GE Renewable Energy’s Offshore Wind business, said, “We believe the Haliade-X has a key role to play in driving the growth of the offshore wind market in the U.S. and globally. Because it is the most powerful machine in the industry, it allows our customers to drive down the cost of wind energy and speed the adoption of clean, renewable energy. We look forward to working with our partners at the Massachusetts Clean Energy Center’s WTTC to put the blade through rigorous testing that will help ensure that it will perform as designed.”

On October 22, the U.S. Department of Energy announced a slate of awards to support wind energy research, development, and demonstration projects, which included a grant to MassCEC for equipment upgrades at the WTTC to enable structural testing of 85 to 120-meter long blades.

“With nation-leading policies, a comprehensive approach to prepare the Commonwealth’s workforce, and one-of-a-kind facilities like the Wind Technology Testing Center, Massachusetts has established itself as a hub for this new industry in North America,” said Lieutenant Governor Karyn Polito. “By providing a laboratory to test and validate the latest innovations in wind blade technology, our Administration is working to ensure that as the offshore wind industry advances in the U.S. market, residents in cities and towns across the Commonwealth will reap the benefits of improved air quality, better public health, and lower energy costs.”

“Massachusetts is proud to have an important piece of infrastructure in the Wind Technology Testing Center that provides the offshore wind industry with an essential tool for groundbreaking innovations in technology,” said Energy and Environmental Affairs Secretary Kathleen Theoharides. “As the only location in North America to offer blade testing and certification at this size and scale, the Commonwealth looks forward to continued collaboration with wind turbine developers to help this industry meet its full potential in the U.S. market.”

GE Renewable Energy recently announced that the company has been selected as the preferred turbine supplier by Ørsted and the owners of the Dogger Bank Wind Farm to provide the Haliade-X for 4.8 GWs of projects in the U.S. and the U.K.

The Haliade-X 12MW is a multi-million dollar investment that will help reduce offshore wind’s cost of energy in order to make it a more competitive source of clean and renewable energy, with each Haliade-X turbine being capable of powering over 5,000 U.S. homes. The global offshore wind market is projected to grow to 120GW by 2030 by the Global Wind Energy Council. Numerous U.S. states, including Massachusetts, have set ambitious offshore wind targets totaling nearly 20 GWs, leading the Special Initiative to estimate that there is a $70 billion supply chain opportunity associated with the new industry.