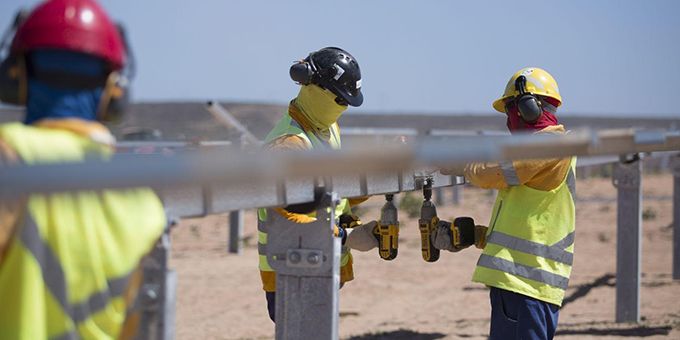 The solar industry faces challenges relating to the need to optimize resources with the aim of reducing the levelized cost of energy (LCOE). In this sense, solar tracker selection and solar tracker suitability for the specific conditions of each site are paramount for project development.

The early stages of decentralized trackers have been dominated by two reference configurations. On the one hand, 1P trackers typically comprised of 90 modules per row in vertical position and, topographically speaking, requiring mostly flat terrains. On the other hand, 2P trackers (vertical two-panel configuration) of an increased height and two 45-module rows, are shorter in height, adapt well to terrain characteristics and need less foundations. Despite these initial advantages, which favor mostly the construction phase and are valued by EPCs, this configuration has been affected by wind-related events significantly impacting projects’ LCOE.

Solar tracker development aims to reduce the weight of electronics in the largest possible number of photovoltaic modules. Both configurations (1Px90 & 2Px45) are limited by the number of modules per tracker, because at a certain size (sail surface) limitations become more evident.

Dual-row trackers, launched into the marketplace by the manufacturer STI Norland, sit half-way through these configurations because they offer the advantages of 1P configuration, as well as the possibility of installing up to 120 modules distributed in two rows in areas of only 60 meters (N-S). Dual-row trackers have a motor row coupled to a slave row by a rod mechanism.

These key differences enable an enhanced distribution of actuator and electronic costs amongst a larger number of modules, thus reducing energy costs. 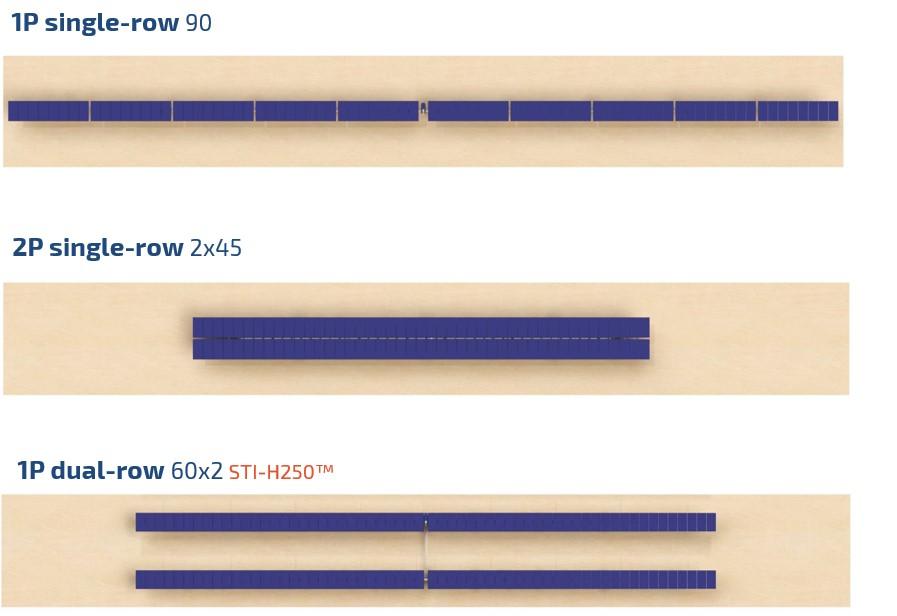 2P trackers have gained market share in countries such as Chile, known for hard terrains and needing the use of micropiles to compensate potential hazards.

The main advantage of the STI-H250™ tracker 1P configuration is its versatile foundation, suitable for a wide range of terrains. That is very interesting because it enables the development of projects deploying the same technology even when geotechnical features are unknown.

On the other hand, torque is the mode dominating tracker instability, being quadratic with its width and proportional to its length. 2P trackers are more directly affected by wind force because to achieve the same robustness as 1P trackers, they need to be structurally enlarged at market prices which are too high.

In any case, stability depends on the combination of a number of factors: mass, rigidity, damping and stow position.

Trackers and Other Practical Considerations

One of the most valued aspects of 1P tracker construction is its easy assembly. Tracker height enables ergonomic installation, without the need for auxiliary lifting elements.

The low weight of parts and reduced number of tools favors dynamic installation, without the typical safety considerations associated to at-height works for assembly of 2P trackers. 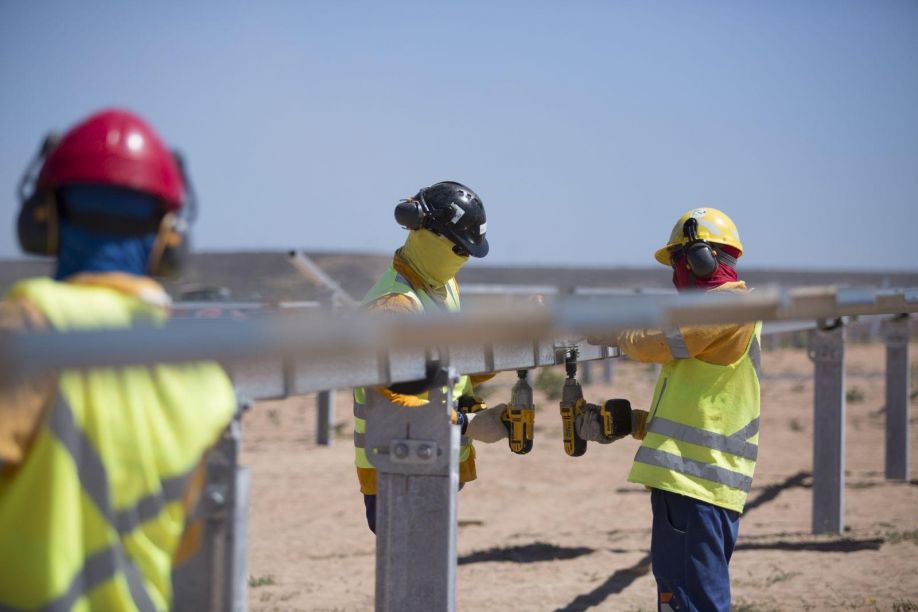 Bifacial modules make it possible to capture solar radiation both on the front and rear sides, thus enhancing plant productivity. A reasonable average value of bifacial gain in a horizontal solar tracker is around +7% compared to monofacial modules.

Having said that, there are multiple parameters linked to the bifacial gain equation, such as albedo, normalized height, row separation, shading, and mismatch.

In this regard, some ongoing discussions are trying to determine which type of tracker architecture would best adapt to the bifacial technology. Initially, it was believed that since 2P trackers allow for gap between modules, they prevented rear shading by the torque tube, hence being better than 1P trackers.

On the contrary, the module gap requires having an additional surface to maintain the same GCR (Ground Coverage Ratio).

Shading can be more significant due to the profiles supporting the modules, which are much larger in the 2P configuration than in the 1P configuration. In any case, generation losses caused by structural shading have a second level compared to other items, such as the geometric view factor.

The geometric form factor, characterized as “normalized height”, basically refers to the terrain surface covered by the module. For trackers in 2P configuration to absorb the same light in the rear side, panels would simply need to be at double the height, which would result in other tracker inconveniences. 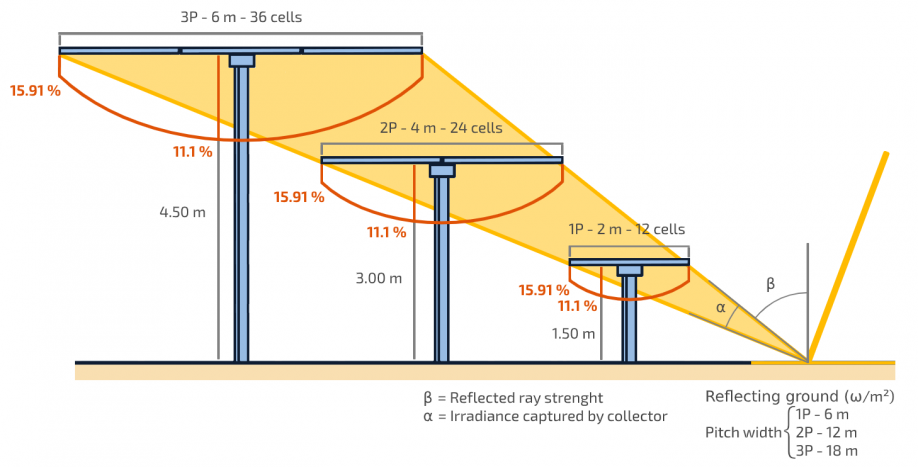 To counteract such geometric disadvantage, manufacturers of 2P trackers advocate the theory that since modules sit higher, their cooling is better because of the wind.

However, analyses carried out at the Moura solar power plant (Portugal) clearly revealed that temperature differences were more significant in the horizontal axis than in the vertical axis. It is also important to point out that aerodynamic analyses show that wind forces affect mostly external trackers and have a reduced impact on internal trackers.

In view of this, it could be assumed that this relationship between height, cooling and generation would also apply to monofacial modules. However, we have not seen in the sector any evidence of panels being installed at an increased height to improve cooling and optimize generation. 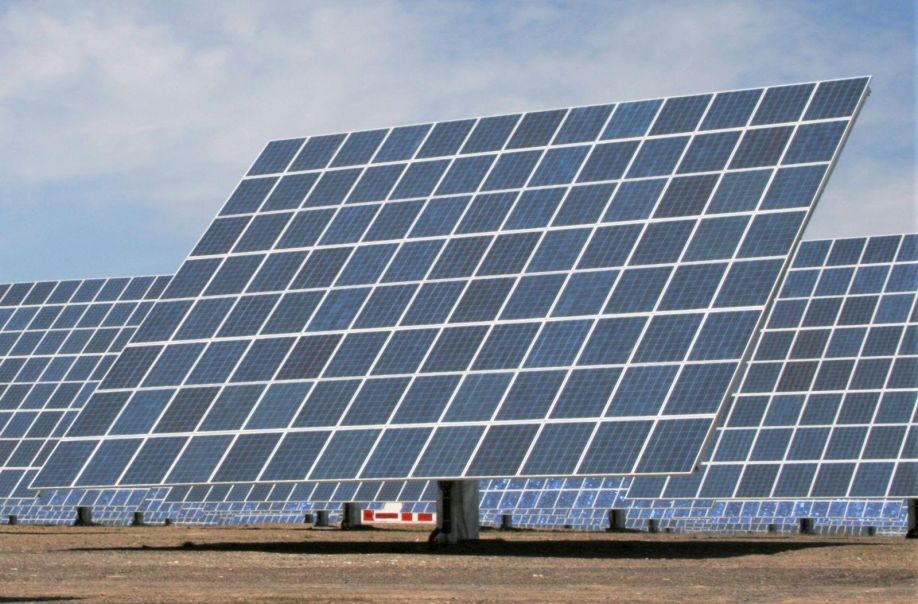 Most manufacturers of solar modules have shifted to half-cell solutions, a technology enabling minimized shading and mismatch (generation unbalance in different parts of the panel). The fact that the half-cell panel connection box sits right above the torque tube is especially relevant for 1P trackers and their cabling management approach.

There is a firm trend in the module market to use larger cells and modules with the aim to improve performance. That is why tracker manufacturers are adapting their concepts to this new reality for modules of about 600W.

1P trackers have the advantage that an increase in size does not compromise their traditional advantages, such as ramming ability and tracker height. 2P trackers, on the other hand, would have more issues, including difficulties to use direct ramming in case of increased height.

Throughout 2019, some suppliers of 2P trackers migrated to the 1P dual-row solution, an industry trend that is becoming increasingly popular. Dual-row trackers, initially launched in 2017, are already operated in over 20 plants. At present, the company STI Norland has developed the fifth generation of its dual-row STI-H250™ tracker with the aim to ensure increased generation, reduced energy costs and optimized adaption to new market trends, as above mentioned.