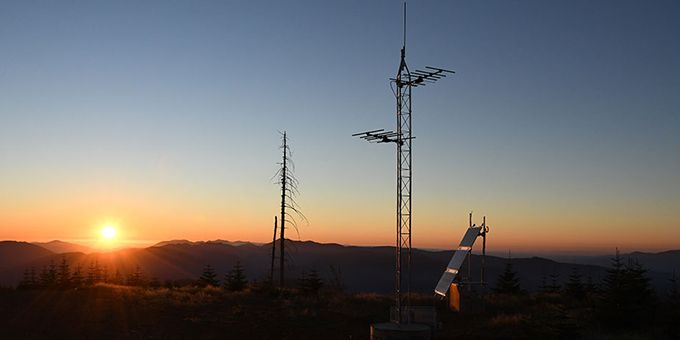 The University of Washington (UW), the University of Oregon (UO), and the United States Geological Survey (USGS) operate a cooperative seismic network, known as the Pacific Northwest Seismic Network (PNSN). The PNSN is dedicated to reducing impacts of earthquakes and volcanic eruptions in Washington and Oregon by providing real-time information about earthquakes and ground motion to scientists, engineers, emergency responders, and the public. The project began in 1969 with five seismic stations and has since expanded to more than 400 stations in urban, rural, and remote areas, making PNSN the second largest seismic network in the US 1.

Unlike severe weather, which can be detected, mapped, and tracked for days or even weeks, earthquakes occur suddenly and without warning. But advances in technology now allow for earthquake detection and warning within life-saving seconds.

Using these advances, the United States Geological Survey, in partnership with PNSN, University of California Berkeley, and the California Institute of Technology, launched an earthquake early warning (EEW) system that detects significant earthquakes so quickly that alerts can reach many people before damaging shaking arrives. By providing seconds, and even tens of seconds of warning time, this system provides opportunity for operators to slow trains and taxiing planes, prevent cars from entering bridges and tunnels, enact automatic shut down and isolation of industrial systems, and allow staff time to move away from dangerous machines or chemicals in work environments and take cover under a desk.

For the fifty million residents living in the coastal pacific west of the United States, earthquakes present an existential threat. Minor earthquakes, those registering 2.0 or lower on the Modified Mercalli Intensity Scale, occur hundreds of times a year, detected only by seismographic equipment designed to monitor, categorize and rate the earth’s movements. Larger earthquakes, those strong enough to be felt, may happen two dozen times per year2. The Federal Emergency Management Agency (FEMA) estimates the annualized losses from earthquakes to be $4.45 billion in California, Washington, and Oregon alone3.

Earthquakes are caused when rock breaks or slips along a fault. This sudden release of energy generates elastic seismic waves that make the ground shake throughout the region surrounding the epicenter of an earthquake. Faults are mapped into seismic zones, where they are tracked and studied. In the Pacific Northwest, there are three main types of faults – shallow crustal, deep, and subduction zone. In recent history, some of most damaging earthquakes in the region were deep earthquakes, like the widely-felt and destructive Magnitude 6.8 Nisqually Earthquake in 2001 in Washington State, as well as shallow crustal earthquakes, like the Magnitude 5.6 Scotts Mills “Spring Break Quake” in 1993 in Oregon.

But the leading cause for concern in the Pacific Northwest is the Cascadia Subduction Zone which has the potential to cause one of the biggest, most destructive earthquakes in human history. A 1,000 km long thrust fault located off the coast of southern Canada, Washington,
Oregon, and northern California, this zone is the convergent boundary between the Juan de Fuca and North American tectonic plates and is the most extensive fault in the Pacific Northwest area. Slips along the entire boundary between the two plates could cause an earthquake of magnitude 9.0+ causing billions in damage, tens of thousands of casualties, and millions more living in a disaster zone with limited access to emergency medical care or vital supplies4.

By receiving real-time ground motion data from a network of seismic stations located across the West Coast, the system can reduce damage and casualties during an earthquake, and also prevent cascading failures in the aftermath of an earthquake.

Providing a robust power source for these sometimes remote seismic stations posed a significant challenge. Strong-motion instrumentation, especially with real-time digital communications, requires a reliable power source of as much as a few tens of watts. Because weather hazards often cause widespread power outages, each system must be equipped with a backup battery system with the capacity to provide four days of continuous operation in order to continue monitoring via local record.

“We must ensure robustness to our monitoring stations in order to capture regional seismic events, including aftershocks. If our data backhaul goes down, it is important that each station has adequate power to continue local recording”, says Dr. Leland O’Driscoll, PNSN-Oregon Program Manager. To meet these challenges, PNSN turned to solar electricity and  Morningstar Corporation.

“We use the Sunsaver MPPT™ to keep our system running and the EMC-1 adapter allows us to monitor critical data in real-time and alert us to any issues. The SNMP [Simple Network Management Protocol] integration with the EMC was critical for maintenance planning of our network,” relayed Marc Biundo, Research Engineer at PNSN. “By following standard SNMP protocols it was quite easy to enable and activate the product into our Nagios Instance [Network Monitoring Software].”

By integrating the SNMP protocol into their network monitoring software, Biundo was able to set customizable alarm settings, allowing him to automate a process that previously required PNSN to manually monitor hundreds of remote sites. Biundo now receives real-time data on the health and state of system batteries and panels, streamlining a process for a system in which seconds are crucial and system failures are not an option. O’Driscoll adds, “As a network operator, this is a dream scenario. Not only can we track station outages, but we
now have the capacity to take proactive maintenance into account.”

This data is also critical for training new staff.

“We buffer 4 years of data for historical assessment / maintenance planning,” Biundo relayed. “This data and performance is valuable in training new staff not quite familiar with battery/solar power system fundamentals.”

As of 2019, the system is undergoing public testing statewide in California, and public testing is projected to expand into the Pacific Northwest in 2021. Across all three West Coast states, commercial and non-commercial partners are piloting this technology.