GTM Research and SEIA forecast another strong year in 2014 with 26% growth in the U.S. solar market. This will bring annual installations up to nearly 6 gigawatts and the cumulative total will be just shy of the twenty gigawatt milestone.

Continuing its explosive growth, the U.S. solar industry had a record-shattering year in 2013. According to GTM Research and the Solar Energy Industries Association’s (SEIA) Solar Market Insight Year in Review 2013, photovoltaic (PV) installations continued to proliferate, increasing 41% over 2012 to reach 4,751 megawatts (MW). In addition, 410 MW of concentrating solar power (CSP) came online. Solar was the second-largest source of new electricity generating capacity in the U.S., exceeded only by natural gas. Additionally, the cost to install solar fell throughout the year, ending the year 15 percent below the mark set at the end of 2012. 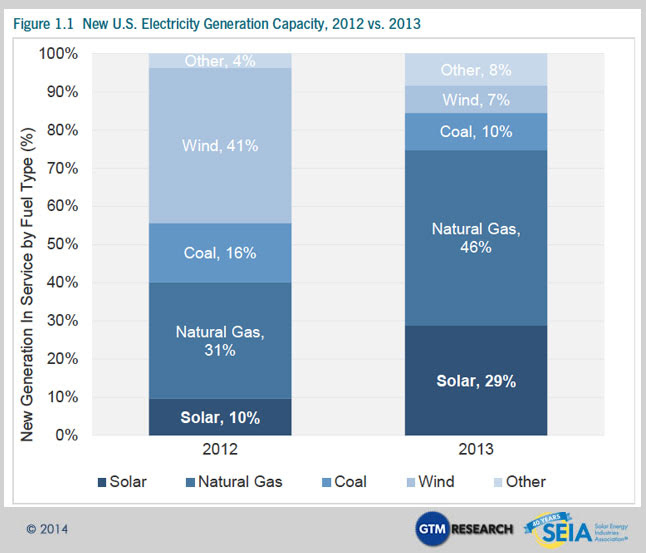 The U.S. installed 2,106 megawatts in the fourth quarter alone, 44 percent of the annual total. This makes Q4 2013 by far the largest quarter in the history of the U.S. market, exceeding the next largest quarter by 60 percent.

“Perhaps more important than the numbers,” writes Shayle Kann, Senior Vice President at GTM Research, “2013 offered the U.S. solar market the first real glimpse of its path toward mainstream status. The combination of rapid customer adoption, grassroots support for solar, improved financing terms, and public market successes displayed clear gains for solar in the eyes of both the general population and the investment community.” 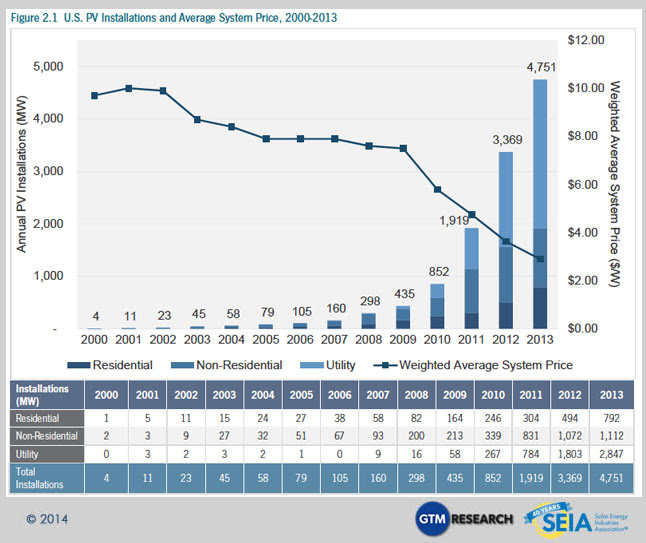 “Today, solar is the fastest-growing source of renewable energy in America, generating enough clean, reliable and affordable electricity to power more than 2.2 million homes – and we’re just beginning to scratch the surface of our industry’s enormous potential,” said SEIA President and CEO Rhone Resch.  “Last year alone, solar created tens of thousands of new American jobs and pumped tens of billions of dollars into the U.S. economy.  In fact, more solar has been installed in the U.S. in the last 18 months than in the 30 years prior.  That’s a remarkable record of achievement.”

California continues to lead the U.S. market and installed more than half of all U.S. solar in 2013. In fact, the state installed more solar last year than the entire United States did in 2011. Despite installing the second-most PV in 2013 with 421 megawatts, Arizona didn’t live up to its 2012 total of 710 megawatts. On the other side of the spectrum, North Carolina, Massachusetts, and Georgia had major growth years, installing a combined 663 megawatts, more than doubling their combined total from the year before. On the whole, the top five states (California, Arizona, North Carolina, Massachusetts, and New Jersey) accounted for 81 percent of all U.S. PV installations in 2013. 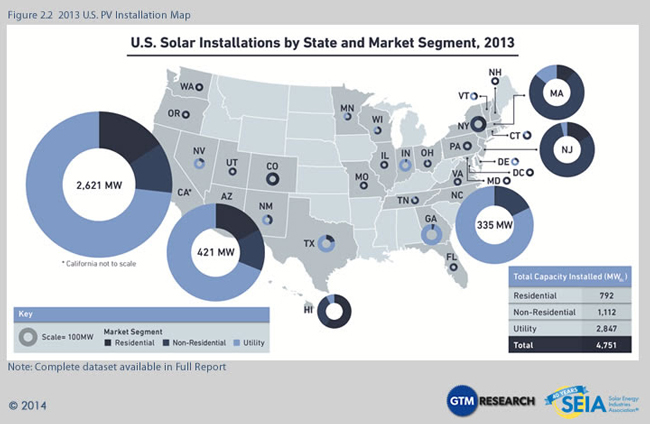 GTM Research and SEIA forecast another strong year in 2014 with 26% growth in the U.S. solar market. This will bring annual installations up to nearly 6 gigawatts and the cumulative total will be just shy of the twenty gigawatt milestone.

About U.S. Solar Market Insight:
The U.S. Solar Market Insight: Year-in-Review 2013 report is the most detailed and timely research available on the continuing growth and opportunity in the U.S. The report includes deep analysis of solar markets, technologies and pricing, identifying the key metrics that will help solar decision-makers navigate the market's current and forecasted trajectory.

Downloadable charts are available at: http://www.seia.org/research-resources/solar-market-insight-report-2013-year-review

About SEIA®:
Established in 1974, the Solar Energy Industries Association® is the national trade association of the U.S. solar energy industry. Through advocacy and education, SEIA and its 1,000 member companies are building a strong solar industry to power America. As the voice of the industry, SEIA works to make solar a mainstream and significant energy source by expanding markets, removing market barriers, strengthening the industry and educating the public on the benefits of solar energy. www.seia.org