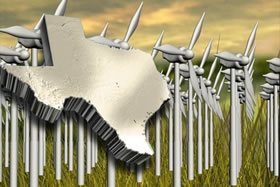 The boom in West Texas wind-powered electricity generation has delivered a major economic boost to the region, including creation of over 40 new businesses and 30,000 construction jobs in 57 West Texas counties since 2001, according to data collected by Public Citizen’s Texas office.
The 40 new manufacturers and businesses make everything from wind turbine blades and steel towers to electronics, according to the data. Wind farms also generate over $85 million in taxes annually in rural Texas counties and more than $9 billion in new taxable assets in the last 14 years.
Over a five-month period in 2014 and 2015, Public Citizen’s Texas office collected data on the economic impact of wind development from county appraisers and tax assessors in the 57 West Texas counties. The data includes estimates of investment values, employment, tax revenues, and lease payments by wind farms, and it reflects review of previous research and case studies.
More Solar & Wind Stories | Articles | News