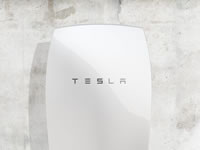 Late Thursday night in Los Angeles, Tesla announced "Tesla Energy," described by the company in a statement as "a suite of batteries for homes, businesses, and utilities fostering a clean energy ecosystem and helping wean the world off fossil fuels."
The statement continued: "Tesla is not just an automotive company, it’s an energy innovation company. Tesla Energy is a critical step in this mission to enable zero emission power generation."
Tesla CEO Elon Musk made the official announcement onstage at the company's design studio in Hawthorne, CA, just south of LA.
The home battery, call the "Powerwall," is intended to store solar energy and enable customers to bank grid electricity from non-peak periods and use it during peak times, saving money. It looks "like a beautiful piece of sculpture," Musk said. You can order it now, and it comes in different colors.
"The Tesla Powerwall is a rechargeable lithium-ion battery designed to store energy at a residential level for load shifting, backup power and self-consumption of solar power generation," Tesla said.
"The Powerwall consists of Tesla’s lithium-ion battery pack, liquid thermal control system and software that receives dispatch commands from a solar inverter. The unit mounts seamlessly on a wall and is integrated with the local grid to harness excess power and give customers the flexibility to draw energy from their own reserve."
More Energy Storage & Grids Stories | Articles | News