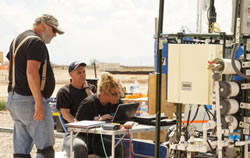 By Eleanor Goldberg for The Huffington Post:  ​While there are many technologies out there than can effectively remove salt from water to make it drinkable, most are expensive and rely heavily on electricity –- rendering them all but useless in remote, off-grid villages.
That’s why a group of engineers from MIT, backed by Jain Irrigation Systems, set out to invent a system that relies on solar energy to bring clean drinking water to rural areas in India, The Washington Post reported.
About 21 percent of India’s communicable diseases are related to unsafe water, according to the World Bank. According to MIT researchers 60 percent of India has brackish groundwater -- while not toxic, that water is too salty to be ideal for human consumption.
The group, which took home the first-place Desal Prize last month in the “Securing Water for Food” challenge, used a method called electrodialysis, which relies on electricity and ultraviolet rays, according to the aid organization.
The first-place winners were awarded a $140,000 grant.  Cont'd...
More Solar Power Stories | Articles | News